Washington, D.C.: The Town That Runs On Gross Sex 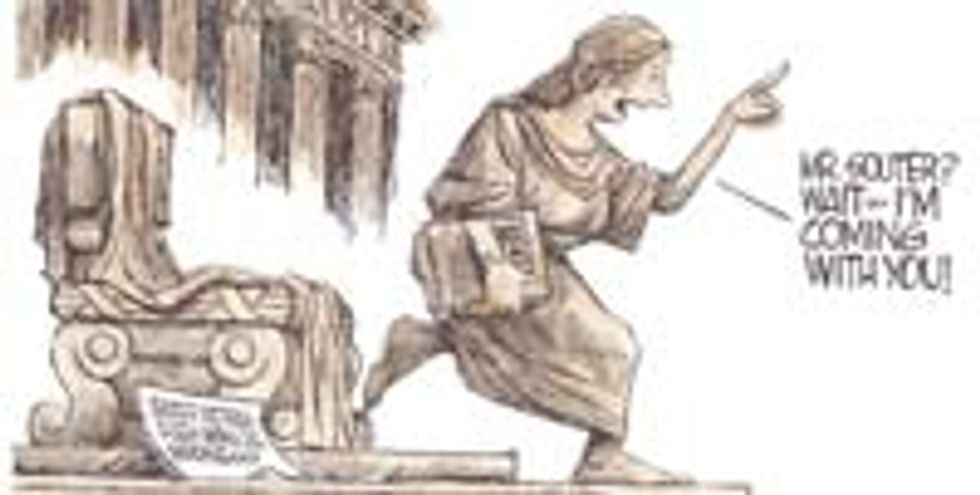 What basic human impulse motivates the men and women who stride the corridors of power in our nation's capital? Is it a desire to advance the interests of their nation? An urge to mold the government to reflect their political ideology? Do they wish to help their fellow citizens? Is it mere lust for power? Ha ha, obviously none of these are the real reason; rather politicians seek to attain and to hold elected office on the federal level because of the insatiable tingling of their naughty parts, because Washington, D.C., is a great big fuckfest for gross, nasty people who would otherwise spend their time masturbating morosely. Cartoons will show you this, though you'll wish that they hadn't.

Click the cartoons to make them bigger, and more distasteful!

All sorts of explanations have been floated for Arlen Specter's sudden departure from the Republican party, from the ideological (he didn't feel like there was room for his brand of centrism anymore) to the tactical (he was afraid he'd lose to a right-wing opponent in the primary) to the psychological (he's just kind of a dick, who likes to fuck with people). None of these are correct, obviously; no, the real reason is that the Democrats seduced him with a sexy donkey. Yes, what septuagenarian can resist a hot, hot donkey with big tits? In fact, this is the reason why Lieberman hasn't abandoned the Democratic caucus completely; his instincts tell him to go, but he just can't get enough of the donkey-fucking.

But not everyone in D.C. likes doing it "donkey style." When Supreme Court Justice David Souter announced his retirement last week, the newspapers trotted out the canned bios that mentioned his longtime bachelor status. And yet few people knew that he had been carrying on a long and torrid affair with the Law. Yes, when he was supposedly in his chambers, eating his simple yogurt lunch, he was really sneaking off to local sleazy hotels to get it on with Lady Justice herself. He liked it when she wore her blindfold ... hott. They never made their love public, because the question of whether a man and an abstract concept have a constitutional right to marry never made it to the bench during his term. But now that he's leaving, she's giving it all up to go back to New Hampshire with him and live in his drafty, termite-ridden shack.

And yet some people in Washington aren't getting any, believe it or not. But that doesn't mean they aren't trying! In order to get laid in D.C., you've got to be willing to tart yourself up a little bit, and that's where sexy outfits like this one come into play. That's right, it's a pink slip, cut generously for that full figure so many power brokers seem to like. The question is, who is going to be putting this little number on before a hot evening out? Will it be the "UAW," the once-lusted-after union that now wants nothing more than to rekindle its lost pride? Or is it "U.S. Auto Bankruptcies," which seem unlikely to need lingerie as they're already fucking everyone? For the first time in history, labels have made a political cartoon more irritating and difficult to understand!

Still, there's no doubting who the real belle of the ball is in our nation's capital: it's Barack Obama. Everyone wants a piece of him, and by "wants a piece of," I mean "wants to have sexy sex with." And good lord he knows it! That's why you gotta work if you expect to get anywhere with him. For instance, say he agrees to go on a romantic camping trip with you. You imagine lying in your sleeping bags next to each other, under the stars ... it'll be so beautiful that you just know he'll give it up. But since you're the pursuer and Barry's the pursuee, you'll be lugging all that heavy camping gear while he just carries a box for his pretty hat. It'll all be worth it, though, when you reach the top of the mountain and then totally get to third base.

America's capital is such a nonstop orgy that other countries want in on the action too! The Iranians are the most insatiable of the foreigns, and their strict control over their own women's sexuality just means that they have to import domineering sex goddesses from our government. Whether it's Condi Rice with a giant spiky club or Hillary Clinton with some kind of enormous carrot-thing, the mullahs can't get enough of that good old-fashioned American discipline. They're all like "Yeah, we're enriching uranium! We'll wipe Israel off the map, or from the book of time, or whatever! Beat us! Tell us we're bad! Criticize our human rights record!"

Of course, the actual U.S. Secretary of State is far too classy for this kind of behavior; as you can see here, they hire drag-queen Condi and Hillary impersonators instead.

After he got back from his sexy camping trip, Barack Obama indulged in one of his favorite pastimes: he dressed up as a Catholic priest and molested a couple of cars.