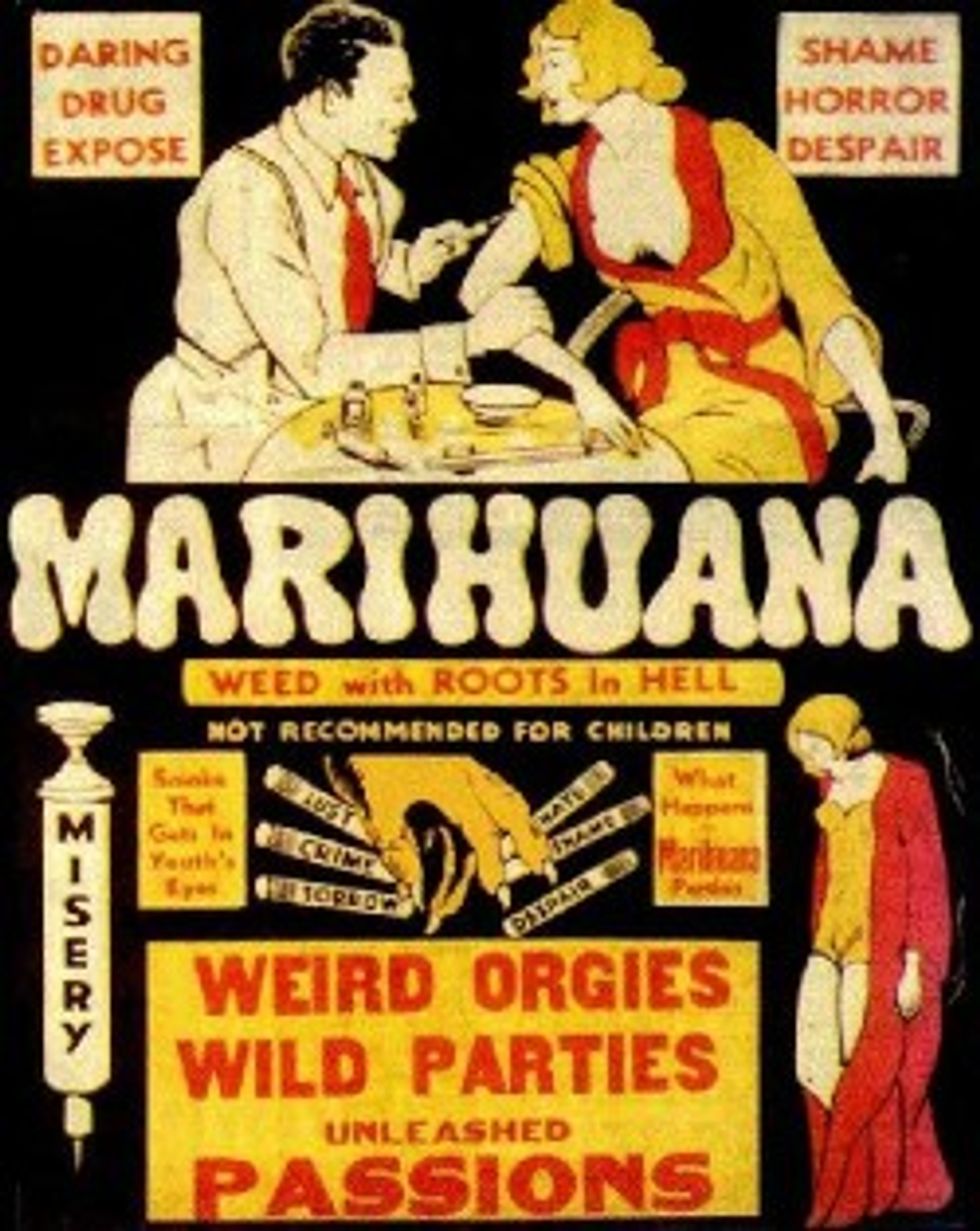 Baboon panniculus Emily Miller of theWashington Times must have been super-jealous that Yr Wonkette already judged S.E. Cupp author of the dumbest column of 2014, because here she is already trying to get us to reconsider. To which we can only say, ladies, don't fight! You are both special snowflakes with the analytical skills of seaweed, and both of your columns are special in their own way. Sippy Cupp, your column displayed a depth of intellect rarely found outside a cellar full of headless puppies. And Emily, your column is a true masterpiece of derp-stuffed derp wrapped in more derp. A turducken of derp. A derpducken. Let us dumbsplore it together, and feast upon its derpitude.

A discerning reader knows he is in for a treat just from the headline "Obama's Cultural Legacy is Legal Marijuana Blowing Through America" followed by the subhead "Stoned citizens will further burden the dependency society." My God, the reader might think, is this column from a Hearst newspaper in 1936?  At this point the reader might spark up a bowl to enhance the giggles that are surely forthcoming.

You can go into a store in Colorado and buy marijuana to get stoned for kicks, but you cannot purchase a 40- or 60-watt light bulb. This is the state of affairs in America after five years of President Obama’s liberalism, which has misguided the public on what are the actual dangers to society.

We would like to point out two things: first, "misguided" is not a verb, Senior Editor of Opinion for a major metropolitan newspaper. And second, the light bulb phaseout was signed into law in 2007 by noted liberal George W. Bush. We know that's a difficult piece of information to track down, what with how long it can take to open a browser window and navigate to Google, but you should still try. We believe in you.

Ah, facts are really irrelevant here. The column is one long moral scolding, and we really cannot do it justice. It hits all the right notes: Chronic marijuana use can lead to "psychosis, depression, suicidal thoughts, and...loss of engagement in formerly pleasurable activities! Marijuana is such a gateway drug that virtually everyone in a rehab facility started with pot! Hollywood liberals are pushing pot on your kids! Children in states that have legalized medical marijuana are doing worse in school!

By now you're probably thinking that all of Miller's research for this column consisted of watching Reefer Madness. But she did actually manage to interview someone, a Heritage fellow with a colorful past named Cully Stimson who writes about drug policy and who had this to say about a pending legalization ballot initiative in Washington, D.C.:

“By telling them that marijuana is a medicine and not a drug, then legalizing it, you’re going to have a stoned, dependent community that is even worse than today.”

Screw Reefer Madness. At this point we were picturing an FW Murnau film with legions of slack-jawed stoners shuffling through a metropolis of crazily angled skyscrapers and deep shadows until they reach a faceless building where a sneering bureaucrat in a monocle and a surplus German army uniform would hand them each a welfare check they could use to buy more pot at the nearest government-run pot store.

Colorado and Washington are breaking federal law, established in 1970, which prohibits possessing, growing or distributing marijuana. However, Attorney General Eric Holder Jr. decided unilaterally in August not to enforce the statute in these two states.[...]

Mr. Obama's lead prosecutor has given zero direction on how to prevent drug trafficking across state lines or enforce this cash-only business.

We are not lawyer persons, but let us try to answer this one. Trafficking marijuana across state lines is still illegal. Those laws will still be enforced however they have always been enforced. Also, the pot industry in Colorado being an all-cash business is partly because federal law makes it illegal for banks to do business with anyone selling marijuana. So for all the money dispensaries in Colorado made this week, their owners have no place to put it besides their mattresses. So no worries. The socialist Kenyan Antichrist and his sidekick Black Panther have not turned the country over to Mexican drug cartels and wilding bands of crazed potheads. Yet.

By the way, Emily Miller made her name for herself as a reporter with a series, which she later adapted into a book, about her attempts to legally purchase a handgun in Washington D.C. Her advocacy for unrestricted Second Amendment rights is shot through with streaks of the usual paranoid wingnut ZOMG OBAMA WANTS TO TAKE ALL OUR GUNS AND OUR FREEDOMS!!!WOLVERINES!!11! So just for shits and giggles, we present these numbers for her edification.

And we didn't even get into talking about the drug war and the hundreds of thousands of lives lost or ruined by prohibition. We would have, but we think that side of the issue is too complex for you.

We can't wait for Emily's next editorial about how dancing the Charleston leads to premarital sexytimes.