Watch Harry Shearer Dick Nixon -- Before He Dicks You (Video) 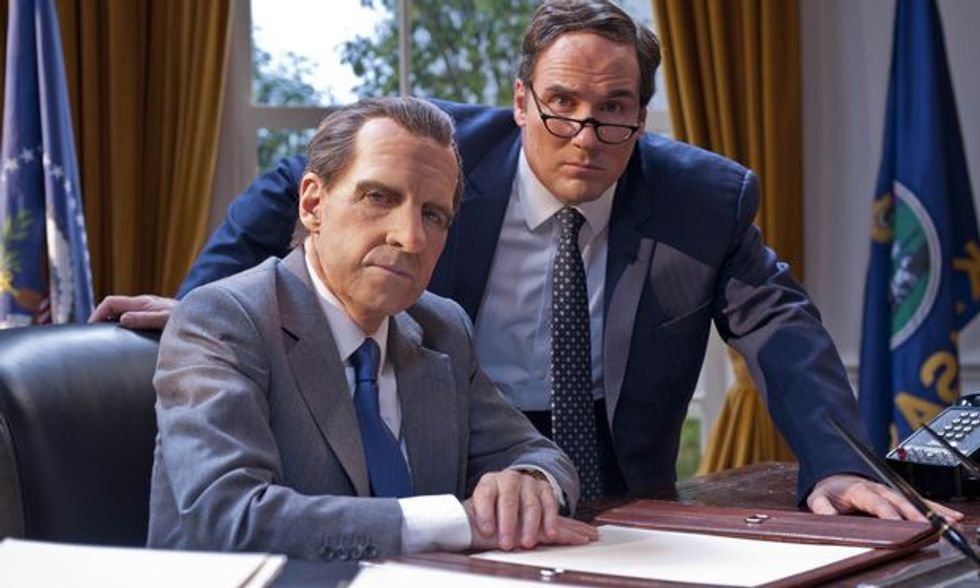 If you're any kind of liberal at all -- and as a Wonkette reader, you're the very best kind of liberal, because you're immune to cheap flattery -- you hold a special, very dark place in your heart for Richard Milhous Nixon, the slimiest human being to ever pace around the Oval Office and cry to a portrait of Lincoln at 3 AM. Oh, sure, Reagan and Dubya may have been far worse at actually Presidenting, but Nixon's paranoid self-importance and underhanded sleaziness put the man in a category all his own. He was truly a complex mass of inconsistencies, for whom Hunter S. Thompson's loathing was fully justified:

he was a foul caricature of himself, a man with no soul, no inner convictions, with the integrity of a hyena and the style of a poison toad. The Nixon I remembered was absolutely humorless; I couldn't imagine him laughing at anything except maybe a paraplegic who wanted to vote Democratic but couldn't quite reach the lever on the voting machine.

And now, Harry Shearer has reanimated Tricky Dick in "Nixon's the One," a web series in which Shearer brings Nixon to life by performing verbatim excerpts from the actual White House tapes -- not so much the famous Watergate tapes, but vignettes that really show us Nixon in all his insecure blustery glory. The series, introduced by the real David Frost and co-written by Shearer and by historian and Nixon tapes expert Stanley Kutler, originally aired in the U.K. on satellite network SkyTV last year, and now all six episodes are being released on YouTube. We only started watching this week with episode 4, "Religion," in which Shearer channels Nixon fulminating to Billy Graham about the universities full of atheists and all the Jews in the media. Jews everywhere! And we are in love with this series. Who'd have thought that merely acting out the Nixon tapes would make for comedy gold?

Ah, but we are talking too much. Let's just dive into this week's episode and you'll see -- don't worry about watching these in order, since the episodes are arranged thematically, not chronologically. Yes, the make-up takes a bit of getting used to, but after a minute or two you forget about it. Harry Shearer is about as Nixony a Nixon as you'll ever get.

The truly amazing thing is that there's no exaggeration -- as Shearer explained to the LA Times, he was out to make comedy by bringing forward as accurate a Nixon as possible:

There is no exaggeration for effect in "Nixon's the One." Indeed, that the material is so carefully unadulterated — past the new visual element and the unavoidable filter of its being enacted — makes it all the much stranger. Shearer and his cast mates would listen to the tapes "over and over through rehearsals" to reproduce as carefully as possible "the inflections, the pauses, the places were people talked over each other."

As Nixon, Shearer wanted to play all "the hems and the haws, the weird word order or the weird word choices — every time he backtracks, stumbles, mispronounces, it's coming out of character."

Again, too much talking -- go read the LAT piece, but come back to Yr Wonkette and enjoy a good binge-watch of all the other episodes. This is excellent stuff -- Rick Perlstein's book Nixonland is of course essential to understanding Nixon and the political world he helped bring us, but we'd also put "Nixon's the One" right next to that classic. Watch, and don't be surprised if you shudder just a little, too.

Episode 1: "Pilot." Nixon discusses the White House recording system with H.R. Haldeman (Demetri Goritsas), gets a good butt-kissing from Henry Kissinger (Henry Goodman) about what a fantastically brilliant speech the President gave, and lectures some milk industry lobbyists on marketing strategy, because Americans just aren't getting enough sleep, and selling milk as a sleep aid would be brilliant.

Episode 2: "Henry." More butt-kissing, a dance of egos, and two men who are dangerously self-absorbed and don't especially trust each other. Also, Nixon still resents the fact that Kennedy never invited him to the White House for a social function, not once.

Episode 3: "Secrets." Nixon would really, really like to use every part of the government to go after his enemies, and it's goddamn frustrating that the agencies don't understand that Nixon has an election to win. Features a classic bit of real H.R. Haldeman complaining that the Watergate burglars were utterly inept, and that any future operations have to be done "eptly...eptly!"

Why are you still reading these descriptions? Watch this stuff -- it's brilliant!