Watch Hillary Laugh And Laugh As Benghazi Burns, Because Sure Why Not? 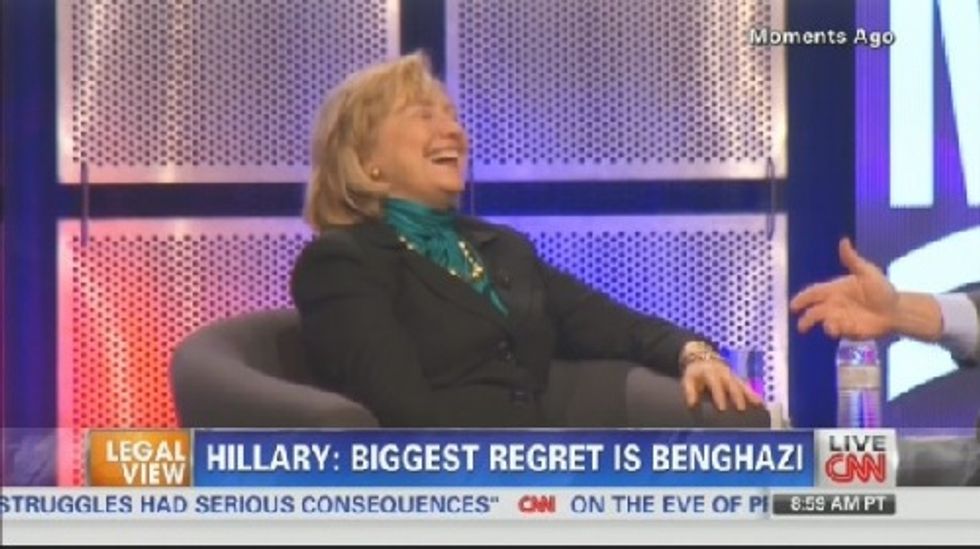 So here's a bit of video editing that's not going to go on anyone's resume: In a story on Hillary Clinton being interviewed at the National Auto Dealers Association, because of course that's a natural venue for former secretaries of state, some genius at CNN edited two parts of the video together with a 14-nanosecond transition between them. The problem was that the first bit was Hillary soberly saying her greatest regret from her tenure was the Benghazi attack, and the second was from some point later in the interview, showing her chuckling over the obviousness of a question about her plans for 2016. Crammed together, the segments created a brief moment where Clinton can be seen laughing over a chyron reading “Hillary: Biggest Regret Is Benghazi.”

Look, as America-hating liberal libunatic dhimmi commie loving skum, we've all have our giggles over Benghazi, but c'mon, CNN, there's no need to invent an image of Hillary doing that.

Fortunately, CNN host Ashleigh Banfield almost immediately saw the error and called attention to it after it aired:

“Alright, I want to be real clear here,” Banfield said. “Those were two separate sound bites that we tried to get to as quickly as possible. We call them tape turns. One of them was about Benghazi and another -- that was completely separate at a different time -- was about her thoughts about 2016.”

Whoops. CNN apologized for the error, and as far as we can tell, wingnut blogs haven't yet claimed that the video shows Clinton "laughing over the deaths of 4 brave Americans," if only because most coverage of her comments has already tended toward "look at her saying she regrets their deaths when you know the only thing she regrets is that she got caught lying about a video robble robble ghraaaaaaaghhh!" So a little thing like an editing screwup is unlikely to cause her much extra trouble.

Follow Doktor Zoom on Twitter. Don't believe any video you see of him in the company of pastel marshmallow equines.