Watch Out, Jeff Flake, Team Trump And The Flying Rage Monkeys Are Coming For You 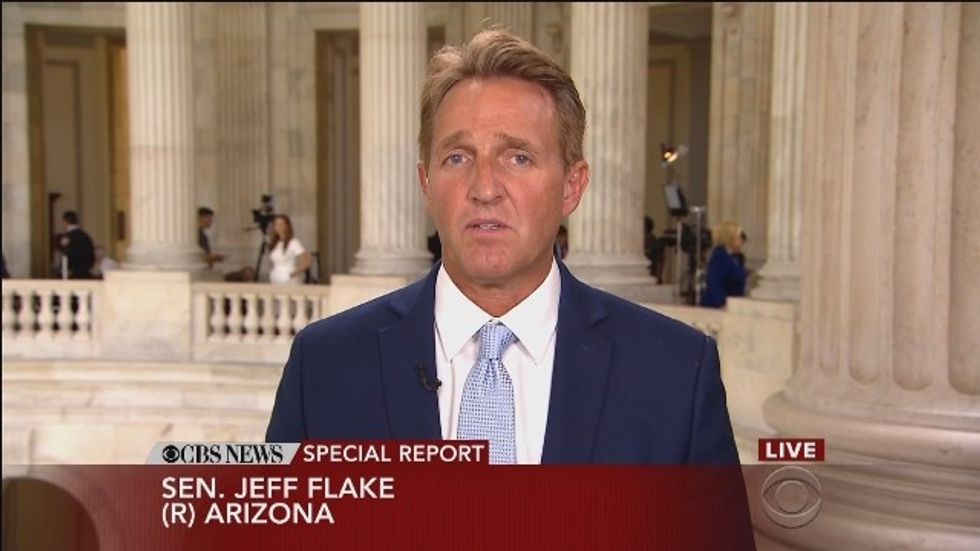 Weird world, where a Flake seems like the reasonable one

Arizona Republican Senator Jeff Flake is up for reelection next year, and he may be facing a primary on the right for the crime of not loving Donald Trump enough, because what part of "Arizona Republican" don't you understand? Donald Trump has been angry at Jeff Flake since forever, because Flake refused to endorse him during the campaign, and even called on other Republicans to oppose him, which proves that Jeff Flake Hates America. Some pretty bad blood there, according to Politico, which notes:

In the waning days of the campaign, Trump became so angry with the Arizona senator that he proposed bankrolling a 2018 primary campaign against him. Backstage before a rally in the state, the president vented that he wanted to find a challenger to run against Flake and that he’d spend $10 million out of his own pocket to defeat him.

Donald Trump met with Senate Republicans Thursday, and only a few of them openly stuck out their tongues and went 'Thhpppppbbbbttt!' right in his face. Trumpmentum is clearly building.

Which, of course, really means Donald Trump would happily see someone else spend $10 million to run against Flake, who has continued to be a rightwing Republican, but not a Trumpist. After Trump had sewn up the nomination last year, he had this very testy exchange with Flake during a meeting with Republicans on Capitol Hill:

When Flake stood up and introduced himself, Trump told him, “You’ve been very critical of me.”

“Yes, I’m the other senator from Arizona — the one who didn’t get captured — and I want to talk to you about statements like that,” Flake responded[.]

Trump wasn't at all pleased, and told Flake that with an attitude like that, Flake would lose in the fall, at which point Flake pointed out that he wasn't up for reelection until 2018. Who knows whether Trump even knew that Senators have 6-year terms? Flake also begged off last year's Republican convention, saying he'd be busy mowing his lawn. But now that the Trump administration has had an unbroken record of huge successes, including getting elected and getting a guy on the Supreme Court, plus naming several very prominent post offices, it's time to start thinking about R-Etribution, so White House officials are quietly looking for a challenger they can get behind:

Since taking office, Trump has spoken with Arizona state Treasurer Jeff DeWit, a top official on his 2016 campaign, on at least two occasions, according to two sources familiar with the talks. More recently, since June, White House officials have also had discussions with former state Sen. Kelli Ward, who has announced her bid, and former Arizona GOP Chairman Robert Graham, who like DeWit is exploring a campaign.

Arizona Rs really love Trump, because they are crazy and he promised to Build The Wall, so shut up about this terrible traitor Flake, who dares to not love the Dear Leader. As former Maricopa County Sheriff Joe "Publicity Please" Arpaio explained, Flake better be careful, or he's gonna be in big trouble, you bet:

Maybe [Flake] should get back on the Trump team. A lot of people believe in Trump’s policies [...] There’s a silent majority that’s still there, and still in this state, so watch out.

Wise advice from a guy who was shitcanned by his own county's voters last fall, and who is currently on trial for contempt of court.

GOP chairman Graham attended a great big fundraiser for top Republican donors in Arizona in the spring, where one of the top agenda items was reportedly the necessity of primarying Flake, whose refusal to be a good Trumper was hugely frustrating to several of the money guys, according to three sources who spoke to Politico. Also attending the meeting was Chris Bannon, who's Steve Bannon's younger brother and reputedly a "conduit to his powerful brother," although since Bannon the Younger would not speak to Politico, it's unclear what he may be conducting to Big Brother about a possible challenge to Flake.

White House officials deny they're actually recruiting anyone to run against Flake, which is almost certainly the best indication that's exactly what they're doing. There are some good, sensible reasons for Team Trump not to back a primary challenge: He's held elected office for over 15 years, is from a very respected Arizona political family, and may well thump any challenger, just as John McCain thumped Kelli Ward last year. Plus, if there are several Rs in the primary, a split field would make the challenge all that less likely to succeed.

And then there's the possibility of making Mitch McConnell mad. Says Politico,

McConnell, who is fiercely protective of GOP incumbents and has vowed to protect those facing primaries, recently became enraged when a Trump-sanctioned outside group launched an advertising blitz targeting Republican Sen. Dean Heller of Nevada, who was also critical of the president during the 2016 campaign, over his refusal to back the Obamacare repeal plan.

So there you go: if all the political good sense militates against Team Trump backing a challenge to Flake, it's almost a lead-pipe certainty they'll do it, and they'll get behind the craziest candidate possible, who would definitely be Kelli "Chemtrails investigation" Ward.

Get ready for the insane 5 AM tweets. Or rather, get ready for them to be about Jeff Flake for a change. Donald Trump may not know facts, but he definitely knows how to hold on to a grudge.

Yr Wonkette is supported by reader donations. Click that "Donate" linky, because obviously it's time to gear up for our 2018 Senate Madness