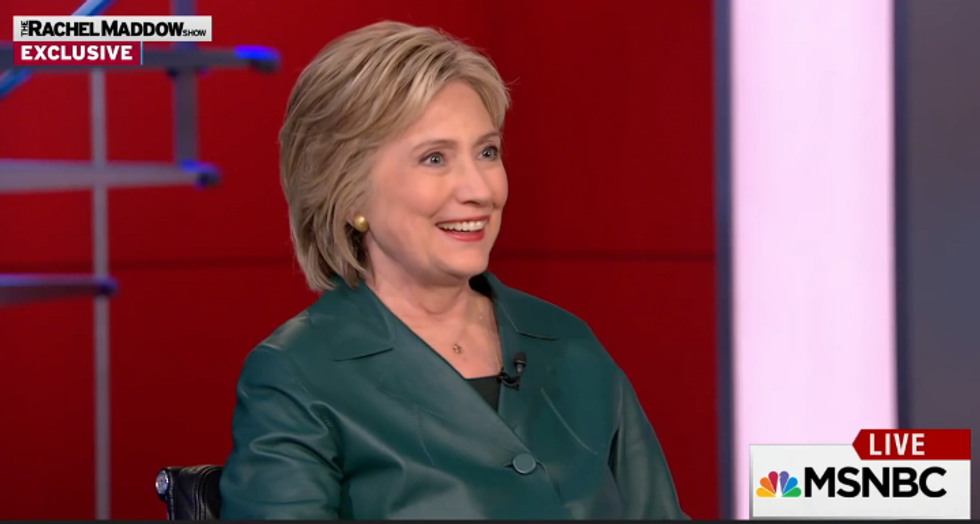 After crushing it in her marathon testimony before the Benghazi Inquisition (which unlike the Spanish one, didn't even offer her a comfy chair), Hillary Clinton talked for an hour with a far more intelligent questioner, MSNBC's Rachel Maddow. We could have lived without some of the teevee trappings -- especially the bits where the interview got chopped up just as Rachel asked a tough question, so it could be teased during the commercial breaks, but that's your basic cable news business, so it goes. Happily, we can toss 'em all into a Wonket post for you, dear readers. Message: we care.

In this first segment, Hillz gets the Joe Biden question in a perfect Maddow frame: Now that Joe Biden has said that he's not going to subject himself to another presidential run, are you a bit jealous of the guy?

Best moment out of that segment? Reacting to Republican Rep. Mo Brooks's threat to impeach her on her first day in office, Hillary asked, "Isn't that pathetic?" And then she laughed.

Next up: Hillary explains why Barack Obama has had to spend so much time fixing stuff that Bill Clinton put into place, like DOMA, Don't Ask, Don't Tell, and the explosion of incarceration following the 1994 Crime Bill. Maybe you'll like her answer, and maybe you will not, but her point is solid. DOMA and Don't Ask, Don't Tell were terrible, but in the political climate of the 1990s, the Republicans' alternatives were far, far worse:

Also, too, for the long term, what will Hillary do to rebuild the Democrat Party in the states and break the Republic Party's stranglehold on state legislatures -- which get to draw congressional districts, which is how any number of idiots get into Congress?

And now the postmortem: Hillary and Rachel talk about the Bataan Death March of her testimony before the House Select Committee on Benghazi, and how she got through it without rolling her eyes even once. Oh, and what did she do AFTER the Benghazi hearings? Was she home alone? The WHOLE NIGHT? No, they all went back to the House Of Hillz and ate Indian food and drank beer, like they were in an episode of "The West Wing" or something.

As to what we learned from the Benghazi hearings: Besides "not much" and "Hillary will be president," there is the real question of what happens when the USA helps throw out a dictator -- if we're going to help people get rid of a tyrant, what can we do to keep things from turning into chaos?

Next, Hillary gets what feels like the most constructed-for-TV question of the interview: What do you do if a Russian jet goes into a no-fly zone and refuses to turn around?

And she nailed it. Nicely done, Hillz. (We'd give you more context, but you're supposed to be watching the Maddow interview, you see.)

Next, Hillary takes on the weirdass Republican desire to dismantle the Veterans Administration and let the Private Market fix everything. Yeesh, those guys.

Funny, how the GOP insists government can't work, then cuts budgets so agencies can't do their jobs, and then exclaims that they've proven that government simply doesn't work.

In the final segment, Rachel gets a bit uncomfortable with her own question, but it's a good'n: Are the Clintons too insular, relying on a tight group of old friends who they know they can trust not to be duplicitous bastards? (We're paraphrasing a bit there.) Hillary replies, as one does, by quoting a Girl Scouts song. Be sure to enjoy the "Blumenthal" montage! Also, a sweet closing question about Hillary and her mom.

And there's your When Rachel Met Hillary interview, which was at least 57 percent more informative than Thursday's endurance test, and without a single stupid question about why Hillary never invited Chris Stevens over to her house for s'mores and a dance party.

We are also contractually obliged to pitch our nifty Hillary shirts, which are of such fine quality that we'd urge you to buy one even if we hadn't gotten a reminder from Kaili, who is a terrific editor even if she makes us watch Fox News sometimes.

You know, we'll make you all a Wonkette Hearts Rachel Maddow shirt, too, the instant she so much as hints she might wear it on air, even during one of those between-segment teasers. We know you're reading, Rachel. Or at least the interns are. CALL US.

UPDATE: To help our readers who live in Canadaland and other places where MSNBC's embedded vids keep loading...loading...loading, here is a link to the transcript of the interview. Sorry the durn videos didn't work so good for you!