We All Live In Autonomous Exploration Submarines: Your Weekly Sci-Blog 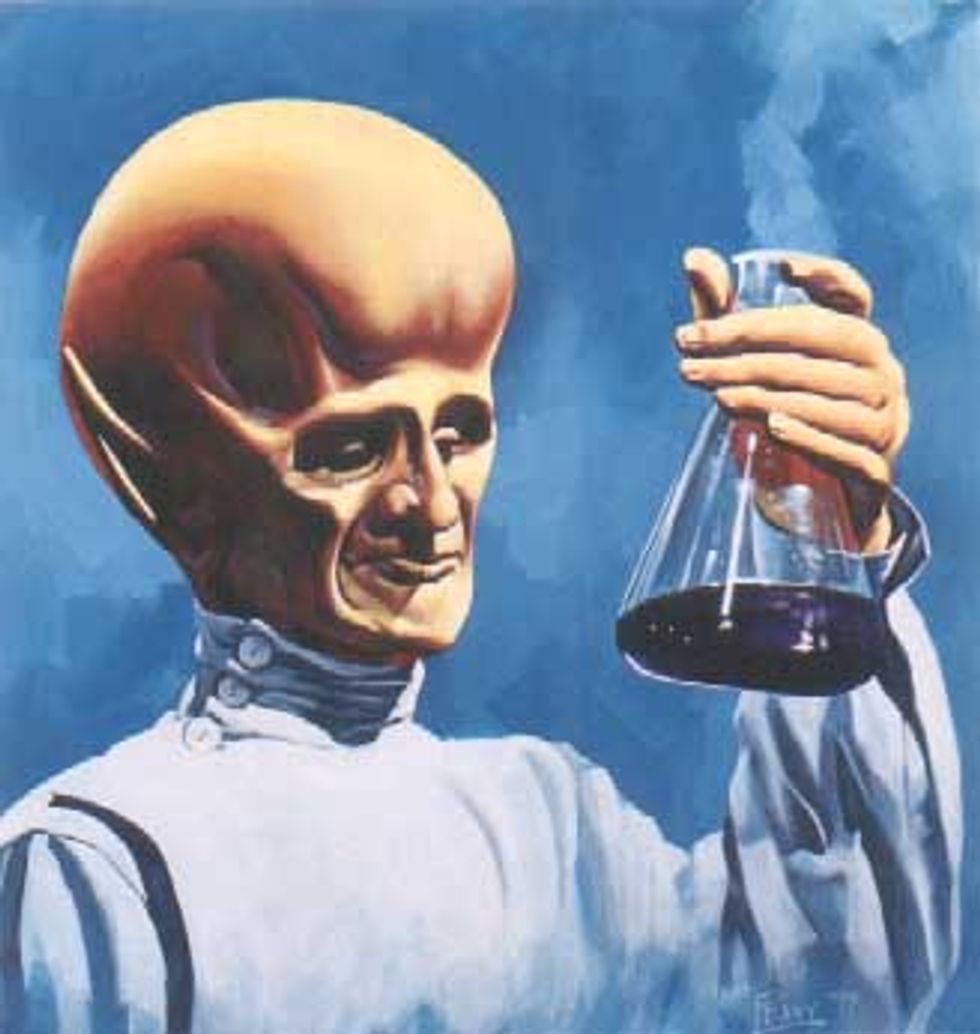 Hello Wonkeratti! It's time once again to expand your brains with Science, congest them with the lifeblood of learning and, finally, make them Turgid with Knowledge. Yes, it's time once again to disrupt the normal flow of Wonkette's daily Festival of Perfect Snark and Rudeness with these disturbing and bizarre Sci-Blog links. There seems to be an audience here for this sort of thing, though and we love you for it. The lengths that The Administration will go to please you Nerds never ceases to amaze me.

It's not every day that the Human Race discovers an ocean. In 1513, Balboa took credit for "Discovering" what the indigenous isthmus tribes people told him was The South Sea (Magellan gave it the darkly amusing name "Mar Pacifico" in 1521, because he happened to catch it on a good day).  These days, with orbital satellite mapping, we know the Earth's ocean surface down to the square meter, can track all the currents and storm systems and determine the height of waves with radar.

The last time we know for sure that an Ocean was discovered was actually in 2011 and it is in a truly remarkable place: under the ice of Europa, the sixth most distant moon of Jupiter.

The concept of liquid subsurface water in the Gas Giant Satellites was first theorized by John S. Lewis in 1971, in his paper Satellites of the Outer Planets: Their Physical and Chemical Nature. In 1979, the NASA Voyager 2 probe provided photographic clues of the moon's ice sheet. In 2002, the Galileo Europa Mission probe looped through the Jovian system for over a year, sending vast amounts of photos and data Earthward. Scientists analyzing the probes data for years finally found definitive proof of a subsurface ocean in 2011. Additional data gathered through ground based instruments tells us that the ocean exists 100 kilometers deep in Europa's Ice and covers the entire globe. We thought that we could have no direct knowledge of the composition of this new ocean beneath the ice. It could be a warm, salty haven for possible life or a poisonous liquid desert.  Aside from future plans for probes that would drill through the icecap to release an autonomous exploration submarine, we had no way to acquire such direct knowledge. Until now.

Now,  A new study by Prof Mike Brown from the California Institute of Technology and Dr Kevin Hand from the Jet Propulsion Laboratory suggests that salty water from the liquid ocean beneath Europa’s frozen exterior actually makes its way to the surface. Using Spectroscopes at the W. M. Keck Observatory, they found evidence of a magnesium sulfate salt on Europa's surface that could only originate from the ocean below. This means that Europa's ocean has a similar type of salt mix as Earth's. It also means that, with the presence of heat energy, liquid water, salts and nutrients, what we have described now is an environment very much like the Earth's deepsea hydrothermal vent communities that are fairly crowded with living things.

Will we find life on Europa? Suddenly, it's looking much more possible.

Research scientists and undergraduate students in a summer program have found precursors to organic molecules in an interstellar cloud gas and dust some 25,000 light-years from Earth, near the center of our Milky Way Galaxy. They used new equipment and techniques  at the National Science Foundation's Green Bank Radio Telescope (GBT) in West Virginia. We have come a long way from Galileo's hand ground refraction lenses in brass tubes, haven't we?

The telescope is part of the National Radio Astronomy Observatory network of telescope installations, (operators of the Karl G. Jansky Very Large Array, which is a national treasure in itself ) that in sum have an awesome record of world class discoveries. Discoveries that have pushed the boundaries of human knowledge out to the edge of the observable Universe and almost back to the beginning of Time itself. Discoveries that will continue until Congress decides that funding Scientific inquiry is something the United States just don't care about anymore.

Sometimes, The Future works out  exactly like your favorite Science Fiction novelists say it will. When I was a kid, I imagined the future looking a lot like Arthur C. Clarke wrote it, with giant orbiting wheels, business trips to Moonbase and grand human explorations to the Outer Planets. Of course, none of that has happened but now we do have flying robotic assassin Hounds that could have been lifted straight out of Ray Bradbury's Fahrenheit 451, a PhilDickian cybernetic web of government and corporate surveillance which so permeates our civilization that Wal-Mart knows your daughter is pregnant a month before you do and an Industrial Accident that may have killed a Sea which might have been written up by John Brunner.

No one can say for sure at this point whether BP's 2010 Deepwater Horizon Oil Spill will be a catastrophe the Gulf's ecosystems can recover from, or the final straw that broke the back of a Sea under stress. Some of the ecosystem studies done on similar oil spills are moderately encouraging, some distinctly less so. The effects of raw crude oil - and the toxic dispersant Corexit - on the Gulf's Pelagic and Benthic zones are much less well known but the available data is not at all good. I don't believe that I'm the only one who cried when the first wave of crude hit the marshes while the submerged wellhead was still billowing oil, feeling that the world had changed irrecoverably yet again.

The liability trial of BP, Transocean, Halliburton and others under the Clean Water Act started on Monday February 25th in the U. S. District Court in New Orleans. So far, we've been treated to tales of economically-driven Corporate risk taking and BP's outright fraud in reporting the ongoing spill volume to Federal authorities.

Behold the Efficiencies of the Free Marketplace.  Talk about Pollution.

Here is the tale of two teams of Physicists locked in a mad race to be the first to discover what has been referred to as The God Particle, The Goddamn particle and, finally, as the Higgs Boson. It's enough to give you the Higgs Boson Blues.

When film director and explorer James Cameron did his amazing 36,000 feet dive into the Mariana Trench this past summer, he really didn't say too much about the living things he found down there.  Now, after analyzing 25 hours of video footage,Natalya Gallo, a Graduate student tasked with reviewing the 25 hours of video that Cameron shot while submerged has presented some very interesting preliminary findings.

Hey Everyone! Are you bored with your old, shopworn Neuroses and Phobias? Why not try this Brand New One on for size?

Oh, to be in an Octopuses Garden.

Lastly, there's been a lot of Hue & Cry on the Internets about proper payment (if at all) of Bloggers. It's common knowledge now that I originally wanted payment for writing this Wonktette Sci-Blog to be tendered in nice young Intern Brains. Imagine my dismay when Rebecca informed me that Wonkette has no Interns and, even if it did, they would actually need their Brains. I had to settle for Cash. A cruel blow but we must press on, regardless.

I know that some of you have been concerned about my exposure to Prions,  and Prion-related diseases caused by brain consumption. Thank you for your concern, but I never said that I would Eat them - there are far more Interesting and Useful things to do with nice young Brains - such as living computers and organic parallel processors. Of course, suddenly having no access to nice young Intern Brains has put all my plans on hold - for now.

Now, I know that all of you Wonkeratti reading this Sci-Blog are bona-fide Nerds and fully using all of your Brains. But you must admit that there is someone you know out there  who just isn't using their Brain at all. Perhaps they're just sitting around filling it up with empty Honey Boo Boo episodes, YouTube nut shot videos or Hannity.

Brains.  A terrible thing to waste, aren't they? Why not send them to me? I will pay Cash Money. Please contact me so that I can tell you the proper extraction and preservation techniques and the address to send the Brain Cylinder. I will see to it that the proper , er, Rituals... ah, Paperwork can be filed. Yesss...

Are those idle, underused Brains around bothering you?  Send them to me. I will put them to work. For Science!

Until Next Time Gentle Readers, Good By. Don't forget about the Brains.