We Are Now, As Ever, At War With Eastasia. Happy Memorial Day From Yr Wonkette. 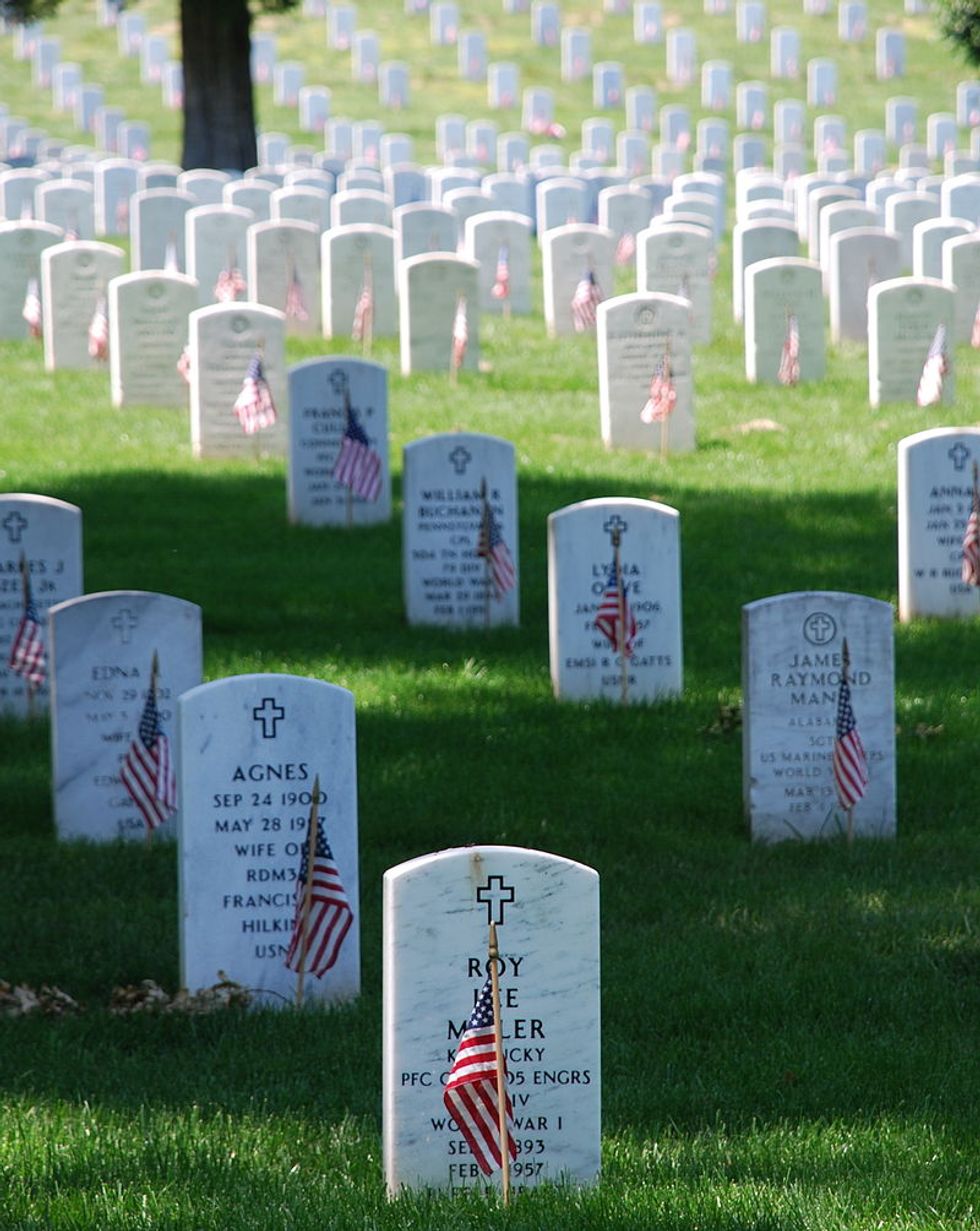 We originally ran this post for Memorial Day 2015. It's a lovely read, so we decided it should be reposted this year.

The Washington Post has pulled together a sobering chart that allows readers to determine what percentage of their lives the United States has been at war. It's worth a look — I was born in 1983, so as long as the Global War on Terror continues for a couple more years, I'll get past the 50% mark before I turn 40.

On September 11, 2001, I was an 18-year-old with no disqualifying injuries and a vague appreciation for the kind of manpower necessary to conduct land wars in Asia. In Minnesota, where I grew up, the easiest way to escape the draft was via canoe, through Lake of the Woods and on to Ontario — or, at least, that's what my dad's plan had been if his number had been called in Vietnam (as it turned out, he was too young and had a good number). Watching the devastation in New York, Washington, and Pennsylvania, I thought there had to be a draft coming. My country would never be so irresponsible as to attempt expeditionary land war in Asia with an all-volunteer force.

Of course, we didn't begin a draft, and we did not declare war, keeping alive a streak that started in 1941 and survived Korea, Vietnam, and two encounters with Saddam Hussein. I went off to college, where I spent most of my time writing (bad) comedy and arguing about the wars in which I would not participate. Given what we know about who serves in America's all-volunteer military, my experience was more typical than not.

Some of my classmates, however, did go into the military. One went to West Point, where he studied medicine. A friend who was not the best student entered the Marine Corps. To this day, he claims that the Corps gave him the structure and the discipline he needed to turn his life around. The bonds he formed with his brothers, he says, are unbreakable.

When my Marine friend earned a Purple Heart in an IED attack in Iraq, the war hit home for me. He still refers to it as the worst day of his life, not because he and several of his fellow Marines walked away injured, but because one of their buddies didn't walk away at all.

My grandfathers both served in the Navy in World War II. One of them made a career of it, re-enlisting after the war to serve in Korea, where he would proudly fling naval ordnance at the people he referred to simply as "chi-coms."

My other grandfather did not re-enlist after 1945. He had volunteered for service at 16, lying about his age in order to join the war effort. He never spoke of World War II, but family lore told of a time when Grandpa Virgil was waiting in a chow line somewhere in the South Pacific, and a Japanese soldier — left behind by a navy that could not evacuate him; gaunt, starving, and desperate — moved into the line and attempted to silently cadge a bit of food. American soldiers quickly began whispering among themselves, then pointing at the intruder. Then someone walked up to the Japanese soldier and shot him in the head. Food service continued apace.

Like I said, Grandpa Virgil didn't talk much about the war.

Soldiers have died needlessly in wars since time immemorial. This will never change; every conflict, no matter how high-minded, noble, or necessary, will involve the needless loss of life. But as a nation, we owe it to our all-volunteer military—to the people who actually do sign up for service—to make sure that if we are going to put them in harm's way, there had better be a damned good reason to do it.

At a cookout yesterday, I got to listen to several current and former Navy personnel discussing their experiences in uniform. It was mundane, workaday stuff, and it was hilarious: pooping onboard a warship is, apparently, an extraordinarily delicate operation. But these Navy personnel also drilled home the bureaucratic immensity of America's military, and the jealousy of watching contractors do the same job as them for much more money.

None of them were resentful of their service, as were so many veterans of World War I. They know they cannot expect Brokovian tributes to their work in 50 years time, as the World War II vets could. And like most members of this generation of the American military, they will smile politely when you say, "Thank you for your service," and then they will remind themselves that you mean well, even as your declaration rings hollow.

I am sick of the idea that a republic can support a global military presence without asking 99% of the members of that republic to lift so much as a finger.

If you see a veteran today, buy them a drink, or ask them what they'd like on their hot dog. Do something to express your gratitude, but know that the best way to honor the men and women of America's military is to not treat their lives as expendable.

Happy Memorial Day, everyone. And if you're looking for actual, meaningful words about the reality of war, I encourage you to read Mark Twain's War Prayer and Wilfred Owen's Dulce et decorum est.