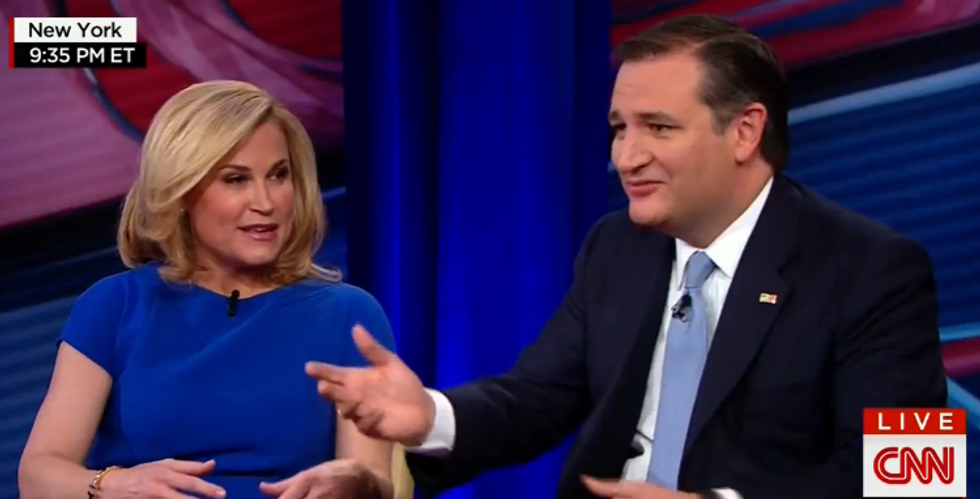 [wonkbar]<a href="http://wonkette.com/600012/is-ted-cruz-adulterous-foreign-born-whore-maybe"></a>[/wonkbar]We have felt sorry for Heidi Cruz quite a bit lately. This is the lady who mayhaps have allegedly been cheated on a million times by her husband, Ted Cruz. Donald Trump retweeted a real yucky picture of her to all his paste-eating followers, with the clear implication that she is a total uggo. Trump threatened to "spill the beans" on all her big secrets. Oh, and she actually thinks her husband has the face of God, which means she is either blind or she was kidnapped at a young age and brainwashed.

But now we're learning a story that makes us feel even sorrier for her. Did you know that when Ted Cruz married Heidi, he took her on a honeymoon, and immediately came home and bought ONE HUNDRED CANS of soup?

Heidi Cruz: When we got back from our honeymoon, he bought 100 cans of soup https://t.co/nhK4sm6wYa#CruzFamilyhttps://t.co/eNzJE5rhrX

When I married Ted, we got back from our honeymoon, and he went off to the store and came home by himself. And I was completely shocked to see that he arrived back at our apartment with literally 100 cans of Campbell’s Chunky soup. I never bought 100 of anything.

Ted interjects, to clarify that he didn't get just one flavor of soup. "Different kinds," he says. "You gotta have some chicken, some beef ... "

This was shocking to me, so we had a tough conversation about it. I said, “You don’t buy 100 of anything, much less canned soup. We can’t do this. I’ll be making things.” He said, “No, I know you. you won’t be making things.”

So the next morning, it was a weekend morning, I loaded up our car before he woke up and returned every single can. And when I got home, I called my mother just to make sure I’d done the right thing as a newlywed. And she emphatically disagreed with me. And so when Ted opened the pantry, I had to quickly tell him that I would go back and buy those cans again.

We need to know things:

We think those are our main questions, at this point. Feel free to come up with more in the comments, which are not allowed.