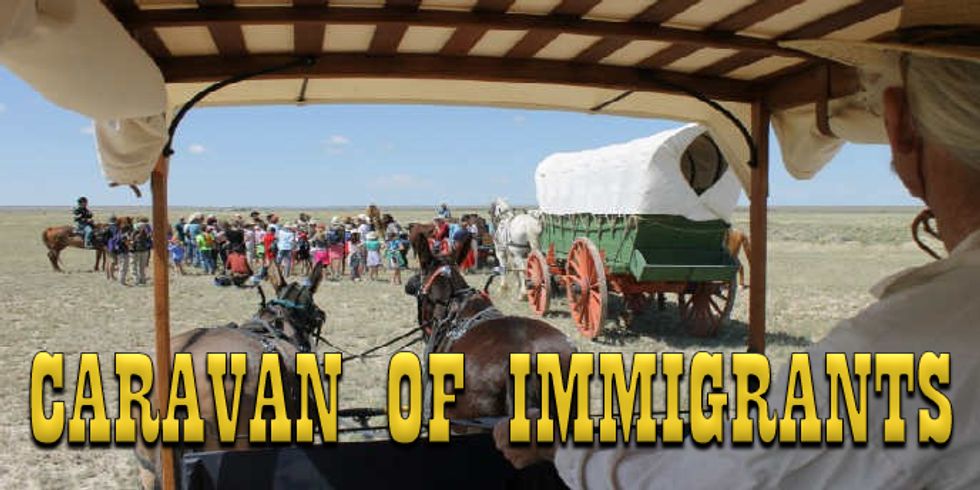 Morning Wonketariat! Are you in WICHITA, KANSAS? Then come join us at Anchor, 1109 E. Douglas, from 5 to 7 p.m. TONIGHT. (Denver, you're on for Wednesday!) In the meantime, here's some of the things we may be talking about today.

That random beer Erik Prince had in the Seychelles with a Russian oligarch is getting new scrutiny after the Financial Times uncovered links between the oligarch and Putin's family. [Archive]

Laura Ingraham will be taking a vacation after insulting Parkland shooting survivor David Hogg. Over the weekend, Hogg stated, “No matter who somebody is, no matter how big or powerful they may seem, a bully is a bully, and it’s important that you stand up to them.”

Lou Dobbs has been sitting in on policy meetings at the White House via speakerphone, with senior aides LEAKING that Trump really does need 24/7 vindication from cable news agitprop.

Trump took Sean Hannity on a dinner date to Mar-a-Lago this weekend. We're pretty sure Hannity would suck his dick without the dinner, but who are we to judge?

Yesterday Fox & Friends ran a story about "CARAVANS" of Mexicans coming to the US, and shortly thereafter Trump tweeted some ill-informed crap about killing DACA (again), scuttling NAFTA, and using "the nuclear option." He continued tweeting early this morning, blaming Democrats for his immigration screw-ups, and whining about his wall.

The Kushner family actually thought their proximity to Donald Trump might result in a "YUGE" payday and pardon for Jared's ex-con father, but instead they've become pariahs of the real estate industry. :(

Senators are openly bitching about Mitch McConnell's reign as Senate Majority Leader, using the lack of debate on the Senate floor as proof that McConnell's only interested in lowering taxes for the super-rich and killing healthcare.

Former VA Secretary David Shulkin was all over the Sunday shows telling everyone how he was "You're Fired." If true, that could trigger a slew of regulations about who heads the VA.

Scott Pruitt's family got a sweet deal on a DC condo owned by an energy lobbyist. There's also a little detail about the EPA paying almost $2,500 to repair a door that was kicked down in March of 2017 by Pruitt's security detail while he was napping. Pruitt took his security guys to the Rose Bowl, so there's no hard feelings.

The former commander of US military forces in the Pacific, Adm. Samuel J. Locklear III, was up for a job as chairman of the Joint Chiefs until "Fat Leonard" gave the Feds some pictures of a 2003 dinner in Singapore, and claimed he gifted a prostitute to the admiral.

Trump's White House interns have one thing in common, and you won't be surprised when you find out what it is.

Wisconsin goes to the polls to elect a new state Supreme Court Justice next week, and the election is already shaping up to be a real slobberknocker.

Protests against the police killing of Stephon Clark boiled over Saturday after a sheriff's cruiser hit a 61-year-old woman, and then drove away.

Brussels is trolling Trump by not allowing the US to rebuild an embassy because of the building's cultural significance. The building previously housed an insurance company.

China is levying tariffs on billions of dollars worth of US goods in response to Trump's trade war. Economists are warning that the tariffs on 128 products, which include pork, fruit, and nuts, could seriously screw up international trade.

North Korean dictator Kim Jong Un hosted a K-Pop band and was "deeply moved," according to state-run media. The musicians told reporters they were surprised when the audience began to vigorously clap in tandem with the dictator.

Mark Zuckerberg crawled out of his hoodie and talked to Ezra Klein about all the tone-deaf things he probably won't do at Facebook.

And here's your morning Nice Time! A BABY BUTTERFLY! They're so wiggly!

We're 100% ad-free and reader-supported, but we need your help to get the caravan to the coffee pot.