It's Palm Sunday, and you know what that means! Time to read one of Kurt Vonnegut's OK but not essential collections! Also, it means it's time to take a little time from the banal evils of the week and read some nice stuff, because dang, you look tense. You should relax some. Here, put your feet up.

Let's Pester A Historian, Shall We? (Be Nice, You)

We're actually taking a week off from Yr Wonkette Book Club; we're halfway through Winter War: Hoover, Roosevelt, and the First Clash Over the New Deal, by Erich Rauchway, a New Deal scholar and history prof at UC Davis. It's a darn good book about Herbert Hoover's attempts to undermine the incoming president and the New Deal, and how that clash helped shape the outlooks of Democratic and Republican politics for much of the 20th Century. And, well, RIGHT NOW:

Also, Herbert Hoover was SUCH a butt!

As an extra-special bonus this month, Dr. Rauchway has offered to participate in our little ol' Book Club. Go ahead and follow him on the Twitters, and then ask him any questions you have about Winter War, the New Deal, FDR 'n' Hoover, and related topics. Please be sure to include the hashtag #WinterWarWonkette so's he finds your question -- if you just toss a brilliant question out there with no tag, how the heck would he even see it? And if you don't use the Twitters, email your question to me at doktorzoom at-sign wonkette dot com, and I will pass them on for you! We'll compile the bestest Q&A dialogues for a midweek Wonkette story!

Also, Dr. Rauchway weighed in on Friday's most important cultural event, the teaser trailer for the ninth Star Wars movie:

The man knows how to nerd. No, do not pester him with your fan theories on Jar Jar Binks. Like, not even if you think he was loosely based on Hoover's secretary of Labor, William N. Doak. Haha, Doak.

We'll finish Winter War for next Sunday, so if you haven't obtained a copy yet, hit the Amazon linky and Yr Wonkette gets a nice kickback!

If you aren't yet following Princeton historian Kevin Kruse, you're missing some of the best stuff happening on Twitter. He's an expert at debunking rightwing nonsense with wit and ample documentation. He's also one of three historians who weighed in this weekend on the vital question, "Does It Matter That the President Knows Nothing About History?" (Spoiler: fuck yes!) He'll also be one of several historians featured in this year's edition of Samantha Bee's "Not the White House Correspondents' Dinner," whee! And if you wanna talk academic cred, this week, he was awarded a Guggenheim Fellowship.

Needless to say, one side effect of Kruse's public service crops up surprisingly often: some dip who's been convinced of utter nonsense by Dinesh D'Souza or other hucksters will tell Kruse he knows nothing at all about REAL history, leading to this sort of exchange:

(The person who told Kruse she knows nothing? A Candace Owens fan with an AM radio show, who insists Kruse knows nothing about "data and accurate black history" because he only writes to please white people. No, she offers no actual data or history; she just knows.)

As tribute, a true hero of America sent Kruse some new business cards.

Time To Help Pay Gahan Wilson Back For All Those Laughs

This one, we're afraid, isn't exactly nice, although it's about somebody whose work probably made you laugh and perhaps cringe a little. Cartoonist Gahan Wilson, whose work appeared regularly in Playboy, The New Yorker, and the National Lampoon for decades, has advanced dementia, and his son in law is running a GoFundMe to raise money for his longterm memory care. Yr Wonkette is terrified of the copyright police, so we'll only link to some of his work that other people have put on the interwebs. But you probably recognize the signature, the style, and the wonderfully sick sense of humor.

The Arizona Republic published a very sweet piece on Wilson, who still draws, but isn't sure of who the people around him are and often doesn't recognize his own cartoons. His wife, Nancy Winters, died in March, and they had been doing OK together in an assisted living facility, but now Wilson needs more expensive care. And everybody whose sense of humor was warped by his should chip in and help with that, if you can afford that. Yes, GoFundMe and the kindness of strangers is no way to run a healthcare system, but it's what we're stuck with. For now.

Yo Yo Ma ROCKS!

You probably already knew that, particularly if you watched "The West Wing." But yesterday, the cellist played concerts in the cross-border twin cities of Laredo, Texas, and Nuevo Laredo, Mexico.

It was part of his Bach Project, which uses the composer's 300-year-old music to explore connections between cultures. [...]

"As you all know, as you did and do and will do, in culture, we build bridges, not walls," he said. After his performance, he gestured to the bridge to his right. "I've lived my life at the borders. Between cultures. Between disciplines. Between musics. Between generations."

A single concert was originally planned to take place on the bridge between the two cities, and officials in both cities were up for that, but they eventually decided it would cause too much disruption to close the bridge even temporarily. So instead it became two concerts, held in parks right next to the border on each side. Works for us!

This is just incredibly cute and neato: Japan's Bicchu Matsuyama Castle, built in 1240, was badly damaged by heavy rains in 2018. After that, tourists stopped visiting, and revenues fell sharply. Around the same time, a very friendly stray cat started hanging around the castle. The kittycat picked up the nickname "Sanjuro" (after a local samurai) and became a social media star. Tourism picked up, especially when the nonprofit that manages the castle named the handsome kitty the lord of the castle. 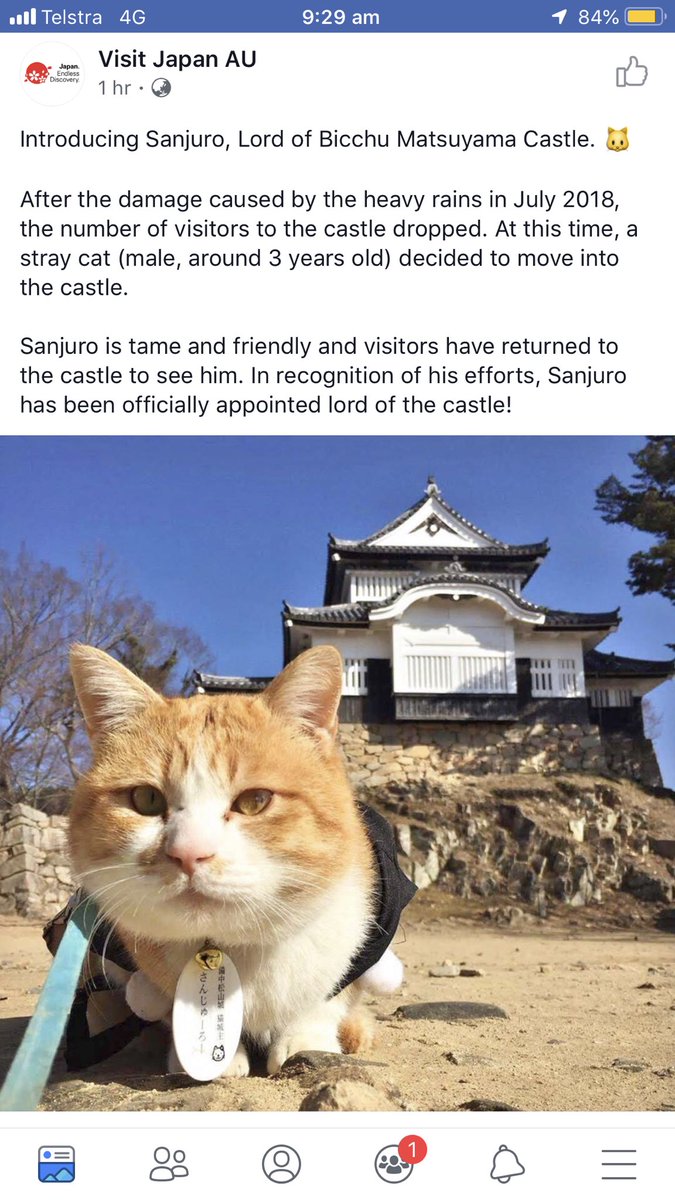 Looks like SOME countries know which orange celebrities deserve at least a ceremonial job. Also, we look forward to the inevitable anime in which Shinjuro is an anthropomorphic samurai kittycat.

Everybody was excited about the Black Hole photos released this week! So were we! We're also lazy, so here, have a video 'splainer!

First Image of a Black Hole!youtu.be

Also, some guy on Twitter found Granny Weatherwax's kitten, You, but said in the thread he wasn't looking for name suggestions. But c'mon, this is clearly You.

We are now dead of cute and ready to go to brunch, too. Have an excellent relaxing Sunday, pester Eric Rauchway with your #WinterWarWonkette questions, and we will all dive back into the daily horribleness tomorrow!

Yr Wonkette is supported by reader donations. You should send us money, you! Even if you are not a little white kitten!