We Have Colonized Reagan Island 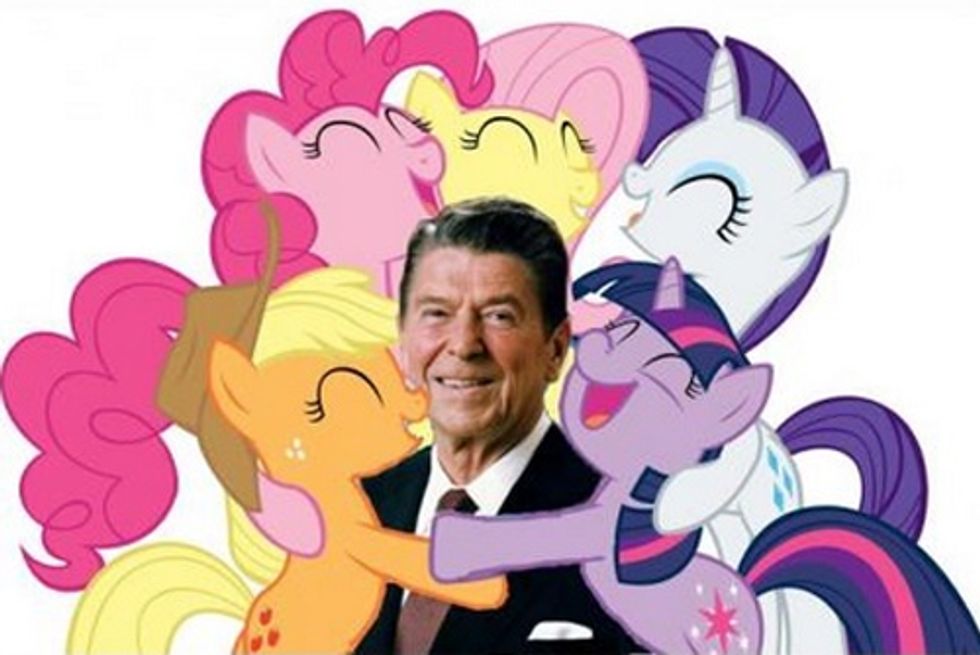 Rejoice, Wonketteers and like-minded culture warriors! Having already filled every corner of the media and internet with your liberal filth, you have invaded and despoiled the one modest online hideaway carved out for the denizens of Traditional America.

ReaganBook, rolled out less than a week ago, was heralded by Faith2Action President Janet Porter as "tearing down the walls of tyranny and censorship."

Facebook has been taking away the free speech of some of the more rabidly anti-gay and, in the illustrious tradition of Conservapedia and QubeTV, conservatives decided they should make their own social networking site that would be even better than Facebook, because none of you people would be there.

ReaganBook would never "collect, sell, exploit, or divulge" anyone's private information, especially to the jackbooted government thugs, so fear not: you can meet new people without Obama's goons kicking in your door just for being friends -- even sexy friends -- with dead totalitarian leaders.

There are probably a few patriots on ReaganBook, Facebook for Patriots, and you might find them after scrolling through the many truly grotesque pornographic images that populate the public news feed in the middle of the page as of this writing.  That is why we have waited until now to give you the link to this thing because, seriously, do not open this at work or around any children or delicate relatives who might get the vapors upon their first encounter with Goatse.

Of course, Yr Wonket would never advocate carpet-bombing ideological opponents with such offensive material. When we mobilize, we prefer to make war through bitingly satirical user names and high-minded intellectual commentary.

Sorry, conservatives! You were having a nice party, probably, by your standards, before Janet told everybody about it. It was small, which might have felt discouraging, but at least you were not outnumbered 20-to-1 by hostile invaders. Janet wanted to be popular, so she invited everyone to parachute down to your private Reagan Island and now you're drowning in unspeakable human depravity and weaponized liberal snark.

You and your coconut radio are no match for us, Mr. Freedom.  We have commandeered a fleet of DC Ducks tour boats and adapted them as amphibious assault vehicles. That's us on the horizon, blasting the Rent soundtrack and maxing out the reserve batteries to run our margarita blenders. We come from the east, like all liberal menaces threatening America from within.

Just give up and accept our offer of a refreshing frozen beverage, Bill. You are surrounded.

Thanks to Wonkette Operative "Shelby" for this action shot of our Shypixel, fearless leader of Shy's Brigade, deep in enemy territory!

What can Janet and her friends do to restore their idyllic island paradise? Should ReaganBook be hyper-exclusive, accessible only with invite codes passed in face-to-face meetings after the presence of Reagan-head tramp stamps are verified? Sure, that sounds tedious, but as it is she's presiding over a collection of sexually explicit gifs and snickering provocateurs.