We Went To A Robert Gibbs Party, And Then A Reason Party! 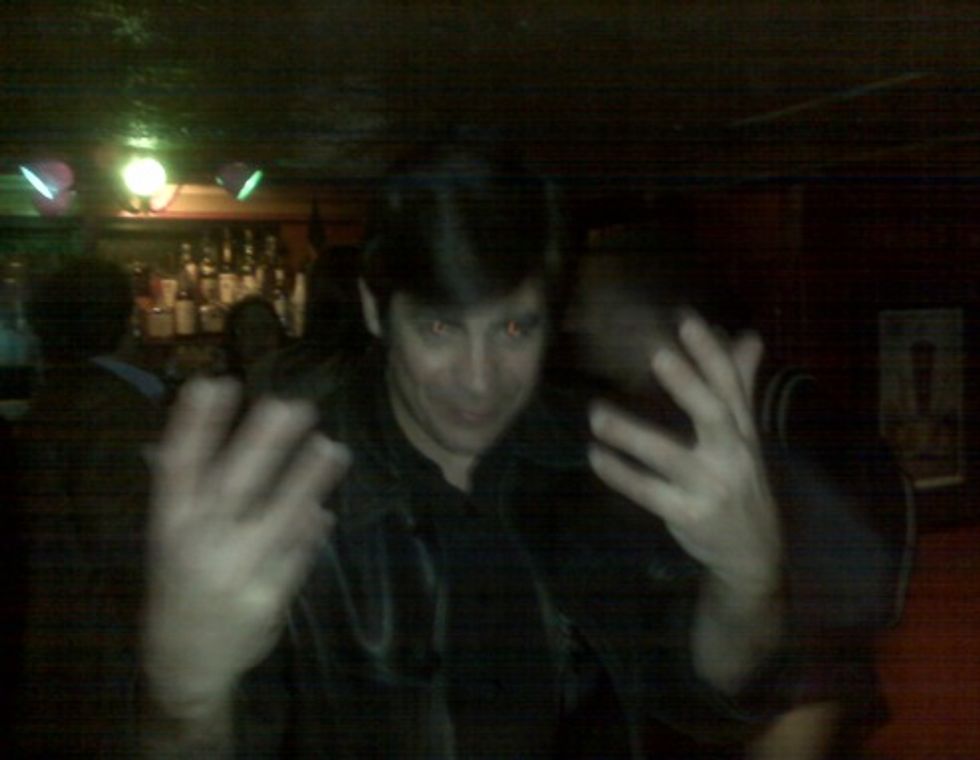 Your Wonkette despises leaving the house, ever, except for such things as food, but even that can frequently come in the form of home delivery these days, what with the Internet and all. But it is Holiday season, alas, and we feel obligated to cover DC's many terrible holiday parties! Last night, your Wonkette, along with visiting college friend operative "Stephen," went to two (2) parties that had absolutely nothing to do with The Holidays. The first was a "send-off to the White House" shindig at the Hawk and Dove for Obama's fierce new press secretary, Robert Gibbs! This was almost certainly a "party crash;" we had absolutely no business being there. The second was a 40th anniversary party or something for libertarian deathrag Reason, which was just a bunch of drunk Cato Institute staffers from Norway getting belligerent at a filthy bar in Dupont. Endless tales of treachery and violence follow.

First, apologies for the gritty camera work seen throughout. Your Wonkette forgot to charge its actual digital camera battery before leaving and was forced to use its BlackBerry camera. Later, it would take your Wonkette several hours to find a way, any way, to transfer these photos to a Mac. We lost a lot of good men obtaining these.

The party for Robert Gibbs, famous for being the Obama campaign's communications director and spokesman, was an unusual occurrence. Not because it was prominent political journalists partying with their future chief White House source -- that awful conflict of interest is what makes Washington so "great," after all! It was strange because we were under the assumption that all reporters HATED ROBERT GIBBS' FILTHY LYING GUTS. Anyway, it was open bar and we chugged a lot of gin in Solo cups, probably on the dime of "Obama for America." Hmm!

Among the attendees was a "who's who" of Conventional Wisdom: George Stephanopoulos, Karen Tumulty, Chris Cillizza, Marc Ambinder (maybe?). Some other people who were not recognizable from Internet stalking.

We talked with America's favorite Bob Saget doppelganger, Jake Tapper of ABC News, whose blog was a frequent source for mean-spirited and useless Wonkette posts during the campaign. We said to Tapper something stupid like, "We write about your stuff a lot, on Wonkette," and he responded in a STAGGERINGLY evil manner, "Oh, I KNOW." (You must understand that every conversation Wonkette has at an event includes a moment when we try to explain away the various times we've called that person a "cocksmoker" or a "dickfuck" or something terrible.) Tapper was a delightful fellow anyhow; we told him that we've called him lovely things in the past (it's true!) and blamed the mean stuff on you filthy commenters; we discussed the short-lived early '90s sitcom The Powers That Be; and then Jake Tapper was gone, forever.

We also met the jolly fellow who writes everything for Politico, Ben Smith! "We just linked to your Muslim thing before coming here!" we barked at him. "And now you're here," he responded. And then Ben Smith was gone, forever.

Lastly, we introduced ourselves to Gibbs, the honoree. Operative "Stephen" for some reason was asking him to guest star on his teevee show (don't ask). We asked if Gibbs was nervous about his upcoming role at the White House, and he responded, "a little." Scoop! We then made an awkward joke about Helen Thomas dying of death disease during a press conference, or something similarly awful. Weird. Gibbs refused to have his cellphone picture taken. ("You're saying that you want me. To be in a cellphone picture," he deadpanned. Robert Gibbs is a stitch.)

Before leaving the party, we were asked to write a nice message on a poster to be given to Robert Gibbs from all of his Journalistic friends. This was not a wise thing to ask Wonkette:

We then traveled to homosexual enclave Dupont Circle to the Reason party. Editor Matt Welch was delighted to see us:

Over the course of the night, Matt Welch would tell us to "fuck off" in thousands of creative variations we'd never imagined possible.

Nick Gillespie, who also is the editor of Reason somehow, greeted us in his iconoclastic way, which is to beg for dead zombie sex:

The most important person we met at this party was a certain longtime senior adviser of sorts from Ron Paul's Congressional office. We told him we were with Wonkette, and he responded, "I am not supposed to like you." We reminded him that in Libertarianism it doesn't matter what you're "supposed to do," and there was silence. A pleasant fellow though, and we had some delightful conversation, and he is our new friend (ha ha how do you like that, Paultards).

Now. Your Wonkette cannot find the words to describe not only how drunk everyone at this party was, but also how drunk they would become by 1 a.m.

The behavior of operative "Stephen" is a good measure. "Stephen" decided it would be a good idea to steal Matt Welch's glasses, from his face, and run around wearing them for 10 minutes. A fight nearly broke out when Stephen yelled at an Australian employee of the Cato Institute, "You are not fucking Australian you fuck" and suddenly we were surrounded by numerous goons from the Cato Institute. Your Wonkette engaged in heated diplomacy and the crisis was averted.

Later, as your Wonkette was sitting in a chair, spinning, one of the Cato goons came over, said some things (meh, who knows), we said some things back (probably "yo mama"), and next thing we knew he grabbed our arm to hold it down and was about to punch! Editor Matt Welch held him back and told everyone to fuck off motherfucker fucking fuck fuck, or something like that, the end.