We Were Proud To Share A Planet With Ursula K. Le Guin 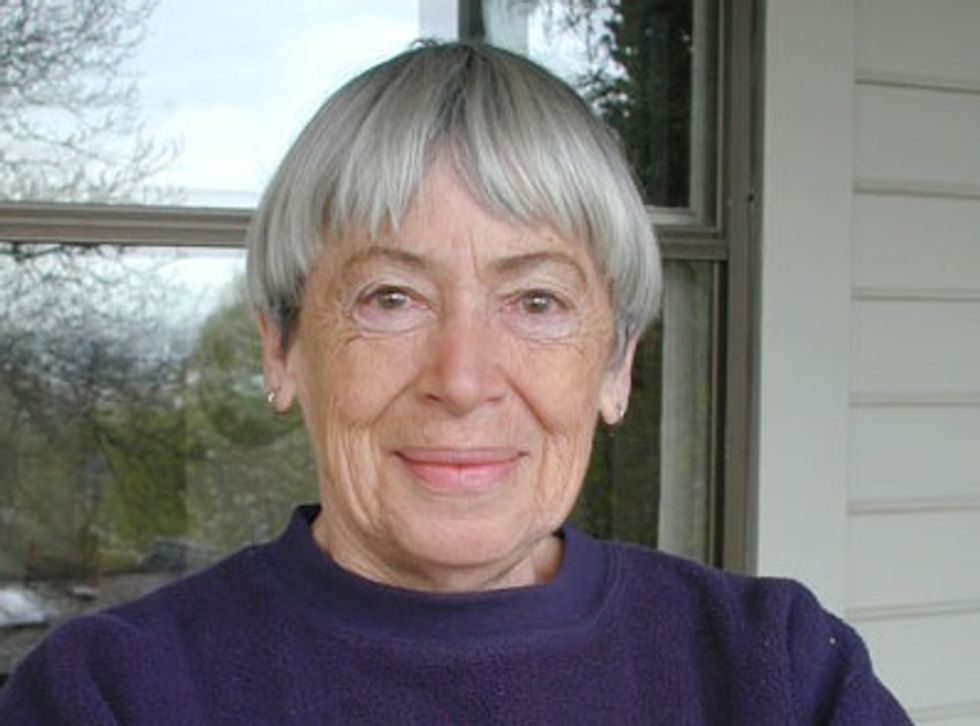 Ursula K. Le Guin, who revolutionized science fiction and fantasy by bringing a social scientist's perspective to genre fiction, died Monday in Portland, Oregon, her home for forever. We can't improve on the New York Times obit's summary of her art, so we won't try:

Ms. Le Guin embraced the standard themes of her chosen genres: sorcery and dragons, spaceships and planetary conflict. But even when her protagonists are male, they avoid the macho posturing of so many science fiction and fantasy heroes. The conflicts they face are typically rooted in a clash of cultures and resolved more by conciliation and self-sacrifice than by swordplay or space battles.

Ursula Le Guin wrote worlds where the speculative difference wasn't so much how people dealt with technology, but with people. In 1969's The Left Hand Of Darkness, the planet Gethen, or Winter, is icy, with a narrow habitable band at the equator, and the humans living there have evolved to be androgynous, taking on male or female sexual attributes randomly each month when they're in heat. For couples, whichever partner goes into season first triggers the other to take on the opposite sex (writing in 1967, androgyny was probably challenging enough without gay Gethenians freaking out readers). One of the protagonists is an Earthling whose unvarying maleness leads the natives to treat him as an unnatural pervert, and barely tolerable. And so Le Guin spins out a story about all sorts of dualities and oppositions, and the peace to be found in balance -- a reflection of her interest in Daoism.

Not incidentally, Le Guin casually mentions, well into the book, that Genly Ai, her Earthling emissary to Gethen, has dark brown skin, which she explained in a 2009 New Yorker interview was a deliberate bit of authorial activism on her part:

Genly’s skin color was not a prediction, it was a bit of deliberate activism. Most readers of science fiction (then and now) are white. Science-fictional characters, then, were white (and nothing said about it).

So, my evil activist plot: Let your hero have a dark skin, but don’t say anything about it, until the reader is used to identifying with that person, and then suddenly realizes, Hey, I’m not white!...But what do you know? -- I’m still human!

This sneaky approach has paid off recently for me personally, in some very touching letters from people of color who wanted me to know that my books (particularly the Earthsea series) were the very first s.f. or fantasy novels from which they did not feel deliberately and hatefully excluded: This World for Whites Only.

She added that -- in 1969 and in 2009 -- she believed humans are more likely to discard distinctions based on "race" than on gender. And she was surprised, 40 years on, that her own midcentury programming about gender roles had sneaked into her own writing: When Gethenians get pregnant, they remain female for nine months of gestation, and then through eight months of lactation, an unintended capitulation to mothering guides of the early '60s that discouraged breastfeeding and pushed infant formula and, if women breastfed at all, early weaning. In the same interview, she apologized:

Wow, did I only give them six to eight months to nurse? How stupid! A clear reflection of the strange and universal American ethnic practices concerning childbirth and early maternity [...] But I went and made the Gethenians act like good American girls of 1960?! I am so sorry!

She also reflects that she thought she was doing something radical, and feared the mostly male science fiction audience of the day wouldn't read it, but to her pleasant surprise, they did -- and many women readers wished she'd been a bit more radical, at that. You get the sense she did, too, even though she was happy with the book she wrote.

Le Guin's fictional worlds are easy to map onto our own, but don't lend themselves to easy answers. She'd prefer we gnaw on the questions, really. I keep coming back to her incredible 1973 short story "The Ones Who Walk Away From Omelas," from her collection The Wind's Twelve Quarters. Last year, when the news broke that refugees who'd been denied asylum in the US were fleeing to Canada, crossing the border in winter because they feared the New Cruelty would send them back to death in their home countries, I couldn't help but think of Le Guin's fable about a perfect little world, the city of Omelas (yep, "Salem, Oregon" backwards) whose perfection magically depends on the absolute suffering and debasement of one feeble-minded child locked, naked and sitting in its own filth, in a basement somewhere in the beautiful city. Within the inexorable logic of a fable (and maybe capitalism), prosperity and happiness for the masses depend on one person's abjection:

They all know it is there, all the people of Omelas. Some of them have come to see it, others are content merely to know it is there. They all know that it has to be there. Some of them understand why, and some do not, but they all understand that their happiness, the beauty of their city, the tenderness of their friendships, the health of their children, the wisdom of their scholars, the skill of their makers, even the abundance of their harvest and the kindly weathers of their skies, depend wholly on this child’s abominable misery.

That's the Deal. If anyone were to show the slightest kindness to the child, the city's happiness, peace, and prosperity would vanish. Most residents of the golden city accept the bargain -- it's awful, but it's how things are. But some can't accept that deal, and quietly leave, never to return. And here we are, in a far less utopian place, where our "president" insists we need to make many, many people more miserable to preserve our way of life. But since America isn't a fable, better to stay and fight instead of walking away.

Dang, here I am at almost a thousand words and I haven't even mentioned my favorite Le Guin novel -- maybe not her best, but my favorite -- The Lathe Of Heaven, a tale about an ordinary schlub, George Orr, whose dreams change reality. George's ability is harnessed -- to disastrous effect -- by a psychiatrist who thinks it might be nice to make the world a better place. But in inevitable Monkey's Paw fashion, the wishes go wrong: Sick of Portland's never-ending climate-changey rain (yes, in a 1971 novel), the shrink hypnotizes George and asks him to dream of a sunny day. George wakes to a Portland in its fourth decade of drought. And so on. PBS adapted it into a movie in 1980, and it was just about the only film adaptation of her work Le Guin liked (I haven't seen the 2002 adaptation that ran on cable, and having learned that, I may not bother).

To my great shame, I've never read two of Le Guin's most acclaimed novels, A Wizard of Earthsea or her "ambivalent utopia," The Disposessed -- the foreword of which says one of the opposing Best of All Worlds was founded by one of the people who walked away from Omelas. Time to get caught up, obviously. Just last night, thanks to one obit, I finally read one of her shortest works, "The Author of the Acacia Seeds," which imagines the translation of one angry ant's manifesto. Take ten minutes and be amazed.

If you want a really lovely look at Le Guin's life and work, go read this lyrical 2016 New Yorker profile by Julie Phillips, who has an excellent sense of her subject and the sensibility she brought to writing. It's a brilliant look at a very grounded, frighteningly intelligent writer who looked forward at the time to writing a new book about late old age:

It sure beats not making the journey. Ursula Le Guin was all about making journeys, and looking carefully at your surroundings, wondering how they came to be that way, and when they were not good or healthy, making a change. That final book, No Time to Spare, came out in December of last year, and yes, we're ordering it, too.

It was a privilege to live on the same planet as her -- and to visit the ones she created.

Yr Wonkette is supported by reader donations. Please click here to give us money -- or purchase some Le Guin books with the links above, and we'll get a kickback!