We Will Have Karen Handel To Kick Around Anymore! 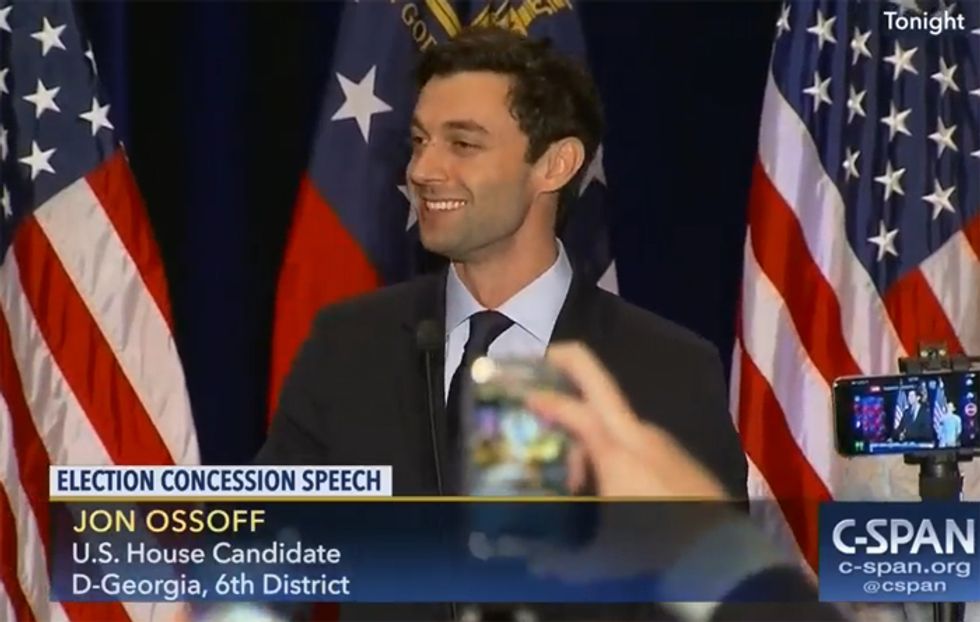 No two ways about it, Jon Ossoff's loss last night in the Georgia special election for Congress hurts. Of the four Congressional seats opened up by appointments to Donald Trump's cabinet, the Georgia 6th District seat previously held by Tom Price seemed the most likely chance for a Democratic pickup, because Donald Trump only won it by 1.5 percent last November. But when it came right down to it, this was a deep red district that's gone Republican since 1979, and which reelected Tom Price last fall by 23 points. So a very Republican district elected a Republican. By a very slim margin.

Yes, yes, we know, a close loss is still a loss. And no amount of better-than-expected actually results in another D vote in Congress. An Ossoff win would have been great as a validation of resistance to Trump, and it would have been a lot better for momentum-building toward 2018. From a purely practical standpoint, though, it would have meant a 247 to 188 Republican majority in the House, instead of the 248-187 split we'll now have with the election of Republicans last night in Georgia and South Carolina. Jon Ossoff is a good guy, but he couldn't have stopped the Republicans from brewing up horrible legislation and ramming it through. So there's that.

And let's not discount the better-than-expected stuff, either: In a general election, a lot of close losses like last night's would be disastrous. But Ossoff's 20-point swing against a very well-funded, well-known candidate, in a very Republican district, is not exactly Just A Participation Trophy. It's evidence that good Democratic candidates can be competitive in districts that seem like a Republican lock -- consider what might have happened in a district where the R won by 10 points instead of 20 last time. And instead of one district, 2018 has at least 64 probable swing districts, as identified by Swingleft.org.

Also worth mentioning: Karen Handel did everything she could to avoid saying Donald Trump's name during this election. When candidates in your own party treat you like Voldemort, that's not exactly great news for 2018, particularly given how badly Trump handles his wand.

And then there's South Carolina, and a race that was supposed to be such an easy win for the Republican that most outlets -- Yr Wonkette included, us-a culpa -- simply overlooked it. Surprise! In a special election for the seat that Mick Mulvaney won by 20 points in November, Democrat Archie Parnell -- a first-time candidate like Jon Ossoff -- managed to get incredibly close to beating Republican state Rep. Ralph Norman, losing by under 3,000 votes. Yes, a loss, but the point is, that one wasn't even supposed to be close, but even with almost no funding, Parnell made it competitive. Hard to say whether more love from national Democrats could have done the job -- it might have, but in these deep red states, "Hollywood money" can become a rightwing talking point, as it did against Ossoff.

Then there were the special elections for the other two vacancies created by Trump appointments: In Montana, violent manchild Greg Gianforte beat nice Democrat folk singer Rob Quist (another complete beginner) by 6 points. Ryan Zinke had won the seat in November by 16. Not as big a swing, but still a swing. And back in April, in Kansas, Republican Ron Estes won by just under 7 points, for the seat to replace Trump's as-yet-unindicted CIA director Mike Pompeo. Pompeo won re-election in November by over 30 points. Thirty goddamned points.

What this means, kids, is that Republicans will be vulnerable in 2018, especially if they manage to actually push through the horrors they want to unleash on us, like their secret plan to take healthcare away from tens of millions of Americans. And the landscape for 2018 is a lot friendlier to Dems than these four seats were: lots of seats out there that R's won last time by under 10 points, not the much larger Republican advantages the Dems faced in 2017's special elections.

So cheer the fuck up, will you? In Georgia's 6th, the Republicans had a huge registration advantage, millions and millions of dollars of super-PAC money, and they still had to fight to get enough turnout to take a seat that in most years, they could have won with a few bulk mailers and TV ads. As the founders of Indivisible pointed out in an email Tuesday night,

Tonight, a little-known 30-year-old political newbie came within a few points of winning Newt Gingrich’s old congressional district. A couple states away in South Carolina, another political neophyte shifted a district that leans Republican by 9 points away from Trump by 6 points. These are not losses. These are the first droplets of a wave. We’re not there yet, but we’re building toward something big. [...]

Keep in mind what a 5- or 6-point swing against Trump means for the country. It’s HUGE. If we see a nationwide swing of 6 points next year in the 2018 elections, 52 House Republicans will lose. With a wave of that size, Democrats retake the House, stripping Paul Ryan of of his speakership (and maybe even his +5 Republican seat). A wave of that size means we’ll finally have a legislative branch that actually acts as a check on this Administration.

We've got the energy, the momentum, and the smarts (just don't be all elitist about that, OK?). There are enough close seats out there that we can -- hell, SHOULD -- take the House back in 2018. It's time to get to work.

Oh, and Karen Handel? She's already proven herself a good target for comedy, what with her simple, down-home love of depriving parentless babies of gay families and not supporting a "liveable wage." We'd rather have Ossoff in Congress, but Handel will provide us plenty of material.

Yr Wonkette is supported by reader donations. Please click the "Donate" clicky below to send us money!

[WaPo / SwingLeft / Politico / Special thanks to Evan Hurst for letting me cannibalize ideas from his FacePlace!]