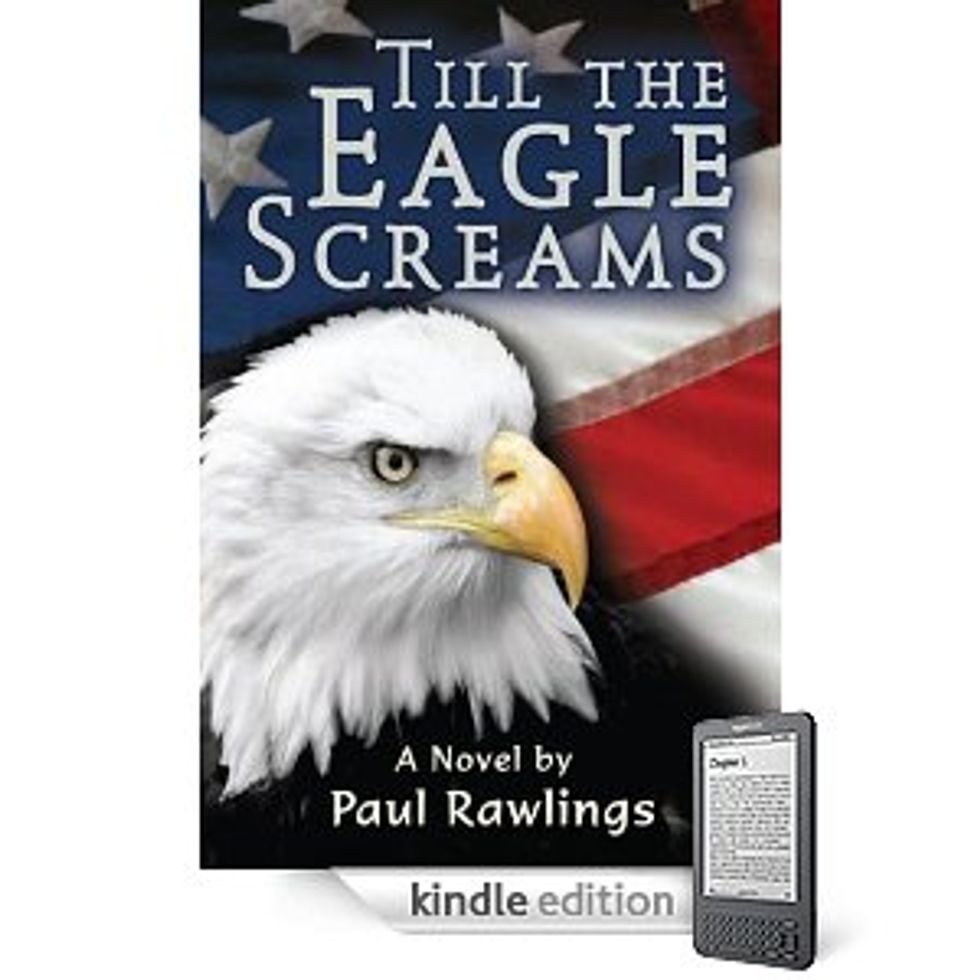 Down in the dumps about the election? Looking for an escape from our National Jobs & Politics Sadness via the wonder of books? Do you crave Teabagger erotica about a small-town Texan sheriff who leads a dramatic insurrection against the degenerate rulers of Amerika, leaving a trail of dead and maimed illegal immigrants in his wake, while having weepy sexytime with his wife? If you answered “Oh hell yes!” to all these questions, Till the Eagle Screams by Paul Rawlings will be your only pleasure in these dark times.

Your reviewer wishes he could tell you more about this “Paul Rawlings” person, but Rawlings doesn’t seem to have left much of a literary trail, as this book is self-published and Wonkette wouldn’t even have known about it without the tip of a curious/cruel reader.

What is this thing about?

Mike Bonner is sheriff of the small town of Starkville, Texas. Early in the story there are some curious events surrounding the injury/paralyzation of a high school football player (it’s not worth going into, believe me), which become national news, and eventually lead Sheriff Bonner into a national teevee interview.

Teevee is the main villain in this book, which is kind of understandable.

Anyway, Bonner (is his a name a tribute to America’s first orange Speaker of the House, John Boehner? Or is it just a reference to those awkward moments at the station when a game of grab-ass gets out of hand?) goes on national teevee and says, “In my view anyone who takes money from a special interest, call it what you will, then votes to benefit that special interest—they deserved to be dragged out and shot.”

And we’re off to the races. Bonner’s comments inspire a wave of violence, directed against all kinds of folks, most prominently illegal immigrants and Congressfolk (and Wall Street “filth,” which is again kind of understandable). The novel doesn’t approve of these massacres, and Sheriff Bonner goes out of his way to say “ain’t my fault,” but Rawlings writes his gore with relish. Naturally, the outcry against the government leads to a new anti-gubmint political party called the Citizens Party. They nominate (who else?) Sheriff Bonner as their leader.

Your reviewer won’t spoil the ending, but he will spoil the sexytime scenes. Turns out Sheriff Bonner is married to a lovely lady called Margie! At some point, Margie and Mike Bonner go to New York City so Mike can appear on a talk show hosted by glib, sleazy, politically correct teevee person Tommy Vine. They don’t quite know what to make of this “New York” thing, with its Times Square MTV and whatnot. After taping Mike’s interview with Vine, they take refuge in the physical act of love. Here’s a portrait of their marriage, rounded off with a Vonnegut-esque sentence:

The room was not chilled when they got back but they were. They clutched each other in bed tighter than they had in two years. They were in a foreign place. They had been to unusual places and were swamped with odd sense impressions. Somehow the oppressive dark thoughts that usually hovered over their intimacy did not descend. They hugged and soon united physically and were briefly enraptured. For him it was very soon over. He was very pleased and soon he was asleep. She was happy the barrier has been lifted. Then she began to feel guilty. And cheated. She still had a restless physical yearning and a conviction that such a hasty fling was inadequate for the momentousness of the event.

She exerted her strong will to keep from crying. If it woke him it would be complicated and might lead to disordered talk. If he lay there deeply breathing while she was in anguish, he was an unfeeling bastard.

And so it goes.

There’s a lot of great stuff in these paragraphs, but your reviewer wonders whether they should have been shortened to simply “For him it was soon over” followed by “She still had a restless physical yearning.” The Bonner sexual experience.

What else can you find in Till the Eagle Screams? High school football coaches, armed rebellion against the wicked government, gruesome murders of illegal immigrants (Sheriff Bonner actually isn’t too down on the Mexicans coming over, but he does like to enforce the Law, "being a sheriff and all"), and much more of the Bonner couple.

As Margie says to her brave lawman-hub:

You say things others don’t. Drag out crooked congressmen and shoot them. You’ve got more but that is enough. They want you for President. What is it Hamlet says? The world is out of joint. He knows somebody should set it right, even if it takes him five acts to get around to it...

How all occasions do inform against him! Sheriff Mike Bonner is the Hamlet of our time.

Point being: buy this book. Unite physically with Till the Eagle Screams and be briefly enraptured!

Till the Eagle Screams by Paul Rawlings, just cold self-published via Xlibris, 306 pages, $9.99

Very special thanks to Wonkette operative Jamie V. This awkward sex scene wouldn’t have reached us without you. Send further sad smut to greer.mansfield@gmail.com