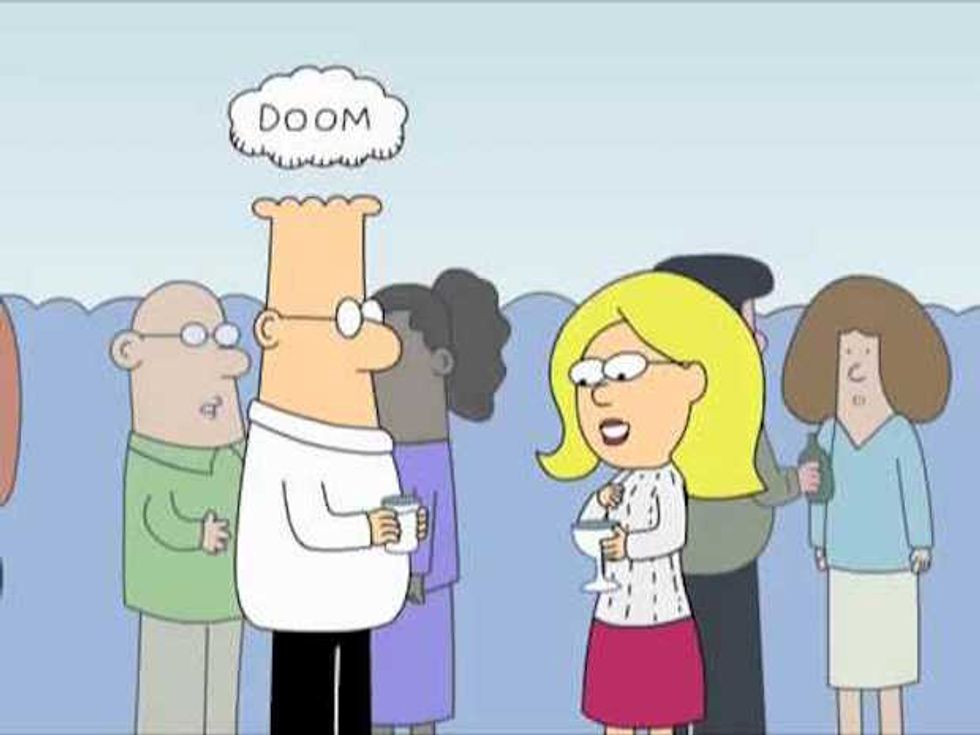 So should he grab her by the pussy or no?

Scott Adams, the weird dude who writes the Dilbert comics and is terrible, has some thoughts about the #TrumpTapes, and -- as you can probably guess -- they are very stupid! And, naturally, he is still very convinced that Donald Trump is going to win this election, even though we all just heard him talking to Billy Bush about grabbing random women "by the pussy."

His reasoning for this is partly that he is pretty darn sure that Trump has some kind of secret BOMBSHELL information about Hillary Clinton that he has patiently held onto only to release at the exact right time. Which does not so much sound like the Trump we all know and do not love.

1. If this were anyone else, the election would be over. But keep in mind that Trump doesn’t need to outrun the bear. He only needs to outrun his camping buddy. There is still plenty of time for him to dismantle Clinton. If you think things are interesting now, just wait. There is lots more entertainment coming.

2. This was not a Trump leak. No one would invite this sort of problem into a marriage.

3. I assume that publication of this recording was okayed by the Clinton campaign. And if not, the public will assume so anyway. That opens the door for Trump to attack in a proportionate way. No more mister-nice-guy. Gloves are off. Nothing is out of bounds. It is fair to assume that Bill and Hillary are about to experience the worst weeks of their lives.

Are we to assume that Trump has been holding back? Really? Really? Because he has some kind of heroic self-restraint? We're talking about a dude who -- at 3:30 in the morning -- goes on a Twitter rant about how a former Miss Universe is fat and also a slut -- and he's got dirt on Clinton that he's holding onto and has not gone after her on, because he's such a classy individual? His gloves have been off for a while -- they just have not been landing any punches.

To boot, going after a woman for getting cheated on by her husband is probably not a great way to appeal to women voters.

5. I assume that 75% of male heads of state, including our own past presidents, are total dogs in their private lives. Like it or not, Trump is normal in that world.

Well then, I think we know the solution -- VOTE FOR A WOMAN!

6. As fictional mob boss Tony Soprano once said in an argument with his wife, “You knew what you were getting when you married me!” Likewise, Trump’s third wife, Melania, knew what she was getting. It would be naive to assume Trump violated their understanding.

Cool, yeah, Trump is just like Tony Soprano. That is a good thing, a thing people want in a president.

I could give a flying shit if Melania and Trump have an "arrangement" -- I mean, quite frankly, I hope she's getting hers because I cannot even fathom her having to live a life where the only person she gets to fuck is gross Donald Trump. She better have a hot ass pool boy, at the very least. The problem with Trump's comments is that not that he maybe cheated on his wife, but that he talked about sexually assaulting women.

Adams then tries to suggest that Trump was merely telling the truth about his lived experiences...

7. Another rich, famous, tall, handsome married guy once told me that he can literally make-out and get handsy with any woman he wants, whether she is married or not, and she will be happy about it. I doubted his ridiculous claims until I witnessed it three separate times. So don’t assume the women were unwilling. (Has anyone come forward to complain about Trump?)

Does ... does Scott Adams think Donald Trump is handsome? HUH, I guess there is no accounting for taste. However, if you say you go around grabbing women "by the pussy" at random, without bothering to find out if that is something they are into (which it almost definitely is not), you're clearly saying you don't care if they are willing or not.

THIS IS THE BEST PART THOUGH.

8. If the LGBTQ community wants to be a bit more inclusive, I don’t see why “polyamorous alpha male serial kisser” can’t be on the list. If you want to label Trump’s sexual behavior “abnormal” you’re on shaky ground.

Does Donald Trump identify as a “polyamorous alpha male serial kisser”? Is that even a thing? I'm pretty sure that's not a thing. Also, exactly no one is accepting of any sexual identity that involves doing shit without obtaining consent. We don't accept child molesters, and we don't accept men grabbing a woman's pussy without her permission. Crazy, I know. PS! Unless you actually have a polyamorous relationship, and that is established, you are cheating. You can't have a polyamorous relationship without your partner's consent.

Also, comparing a person being gay or bi or trans or queer -- or even having a sexual fetish of some kind -- to enjoying "grabbing pussies" and kissing women without their consent is some fucking bullshit.

Adams says he still thinks Trump has a 98% chance of winning, but is now changing his endorsement to Gary Johnson "just to get out of the blast zone." You know, because no one at all will figure out that he is being disingenuous even though he's literally saying he's being disingenuous. He claims that as a result of Trump's comments "[t]he shy Trump supporter demographic just tripled," I guess because he thinks there are lots of people out there who will hear his comments and go "YEAH, I want that guy to be president! The one who grabs pussies!"? Or that he thought more Trump supporters would go "back in the closet" but stay at the same numbers? One of the two.

At this moment, FiveThirtyEight's polls plus forecast gives Trump a 22.1% chance of winning, as compared to Adam's 98% chance. That is a pretty big difference! Who should we trust? The guy who predicts almost every election correctly, or the guy who writes Dilbert comics? I guess we shall see.