Weird How These Anti-LGBTQ Lawmaker Guys Can't Keep Their Hands Off The Teenage Boys! 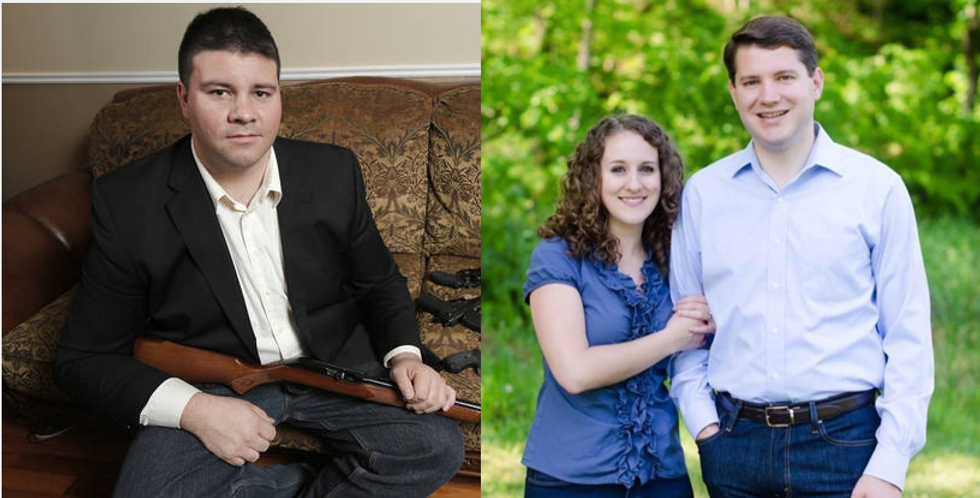 These days, when someone tells you they are a family values oriented Republican, your best bet is to immediately wonder "What the hell are you hiding?" In the case of two Republican lawmakers this week, the answer to that question is "child sex trafficking" and "sexual assault." Surprise?

First up, we have Ralph Shortey, a former Oklahoma GOP state representative most famous for having once sought to ban fetuses as a food ingredient, likely due to cookbooks like "The Joy of Cooking With Fetal Remains" and "Mastering The Art of Fetal Cooking" having been so popular in 2012. Truly, it was the avocado toast of the day.

Shortey plead guilty this week to child sex-trafficking charges, after having attempted to pay a 17-year-old boy for sexual "stuff" last March. If he hadn't plead guilty, Shortey also would have been facing three child pornography counts as well. Because boy, does he ever love those family values.

Curiously enough, Shortey is known to be a very big fan of Alex Jones, who spends quite a good amount of time insisting that everyone on the left is involved in elicit Pizzagate child sex rings. Perhaps the phone calls were coming from inside the house the whole time.

Next up, we have Wes Goodman. Ohio state legislator Wes Goodman was a real rising star in the GOP, ready to take on important issues like trying to make the gays unmarried again, until he had to resign his post this week. Why? Because he was caught in his office making sweet love to a man. AWKWARD!

This comes as a surprise to many constituents, because Goodman has consistently spoken about "natural marriage" being between a man and a woman. His campaign website, which is now offline, outlined his views on family: "Healthy, vibrant, thriving, values-driven families are the source of Ohio's proud history and the key to Ohio's future greatness. The ideals of a loving father and mother, a committed natural marriage, and a caring community are well worth pursuing and protecting."

Goodman’s twitter bio describes him as: “Christian. American. Conservative. Republican. Husband to @Beth1027.” His tweets are protected and his account is private. His Facebook page has been taken offline.

This incident, however, was not nearly as damning as what it turns out Goodman did two years ago when he sexually assaulted an 18-year-old boy in a hotel at his own fundraising event. An event hosted by none other than Tony Perkins of the Family Research Council.

Hours later, upstairs in a hotel guest room, an 18-year-old college student who had come to the event with his parents said the candidate unzipped his pants and fondled him in the middle of the night. The frightened teenager fled the room and told his mother and stepfather, who demanded action from the head of the organization hosting the conference.

“If we endorse these types of individuals, then it would seem our whole weekend together was nothing more than a charade,” the stepfather wrote to Tony Perkins, president of the Council for National Policy.

“Trust me . . . this will not be ignored nor swept aside,” replied Perkins, who also heads the Family Research Council, a prominent evangelical activist group. “It will be dealt with swiftly, but with prudence.”

Several emails and documents pertaining to this incident were obtained by the Washington Post, including some that referred to unspecified "similar incidents" of this kind.

Rather than coming forward about Goodman's "issues," Perkins decided to withdraw CNP's support and encouraged him to seek more "counseling" before continuing with his political career.

Given that this is Tony Perkins we are talking about, it is quite likely that the "therapy" mentioned in the letter is gay conversion therapy, which Perkins is known to advocate. Had Goodman seen another kind of therapist, it is unlikely that "therapy going well" would mean that he would remain a closeted anti-gay lawmaker. Unless that therapist was terrible.

It is not possible, of course, to engage in child sex trafficking, child pornography or sexual assault without being a hypocrite of some kind. Especially as a politician. But there is just something especially enraging about people who commit these kinds of assaults and violations while dedicating their lives to making things harder for law-abiding LGBTQ citizens in this country.

And, on that perky note, this is now your OPEN THREAD!

(Also give us some money please!)