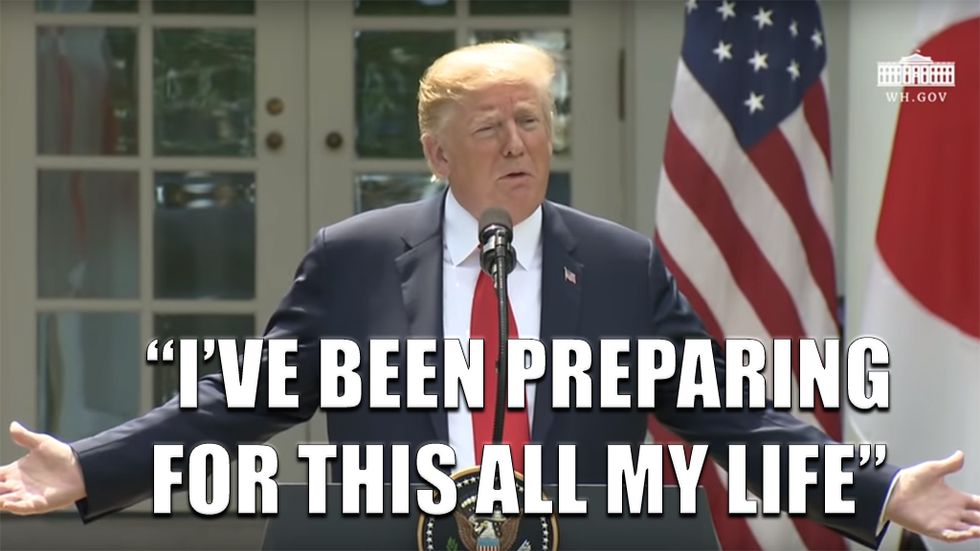 Morning Wonketariat! Here's some of the things wemay be talking about today, but first, FLUFFY PUPPIES!

Natasha Bertrand has another page-turner this morning on Curt Weldon, a disgraced former Republican congressman with connections to two Russian companies and the Trump campaign, potentially adding missing piece in the puzzle of that Trump Tower meeting.

Two journalists who took millions in Not American blood money from Paul Manafort reportedly called up Robert Mueller when Manafort started hitting them up on an encrypted messaging app, suggesting that Manafort is tightening his own noose.

A former Senate Intel staffer has been indicted by the DOJ for lying to the FBI about leaking classified info to three reporters. As part of the investigation, feds seized years of phone and email records from New York Times reporter Ali Watkins, who had dated the guy in the past, and First Amendment folks are PISSED.

Axios has another story about how Trump spends executive time with "The Book" -- not the Bible, which he still ignores, but his briefing book. Staffers reportedly need to include lots of happy-time news stories and Fox chyrons about winning.

Lawyers for Democratic lawmakers have taken the Trump administration to court over apparent contributions by foreign governments. NO COLLUSION NO COLLUSION!

Since at least 2016 Jeanine Pirro has been flirting with Trump over a top position in the DOJ, and has recently been gunning to replace Jeff Sessions, but several White House aides says she's just another starfucking, loudmouthed TV lawyer. So, that's a maybe on a job?

Jonathan Chait put together three of yesterday's biggest news stories and came to a startling revelation: Donald Trump is a lazy sumbitch!

Scott Pruitt made his 24/7 security detail run his errands, like picking up his dry cleaning and buying him hand lotion, protein bars, and Greek Yogurt. Ewwwwww. Protein bars. Nasty.

Senators Cory Gardner and Elizabeth Warren have introduced a bill that would let states do whatever they want with marijuana by amending the Controlled Substances Act. Far-fucking-out!

Senators Mark Warner and Richard Burr are bitching at Google and Twitter over their shady data-sharing agreements with Chinese telecoms.

An unlikely group of Senators has joined forces to add an amendment to the NDAA to block Trump's attempt to lift sanctions and bail out shady Chinese tech company, ZTE.

Military brass wants at least $69 million to make Gitmo more hospitable for the aging detainees. Among their requests is a communal space, wheelchair accessible areas, and hospice care center so detainees can more humanely wither away in extrajudicial limbo.

The House Appropriations Committee passed its first draft of the annual defense budget. Provisions includes another raise for military personnel, more manned and unmanned aircraft, and a guarantee that military families waiting for death benefits don't get screwed by future government shutdowns.

Former Fed chair Ben Bernanke is warning that the Trump tax cuts (for the super rich) and the dramatic increase in federal spending will "hit the economy in a big way this year and next year, and then in 2020 Wile E. Coyote is going to go off the cliff." Meep! Meep!

Drew Maloney, one of the key players in the Trump tax cuts (for the super rich), is getting ready to leave the Treasury Department for a cushy job at a private equity firm, and he stands to make a shitload of money now that he's helped pick apart banking regulations.

GUYS! Kellyanne Conway solved the opioid crisis with some PSAs about people brutally torturing themselves for vicodin! They were produced by those obnoxious anti-smoking people funded by big tobacco.

Yellowstone National Park Superintendent Daniel Wenk doesn't want to leave his job, but Ryan Zinke has told him to move to DC or fuck off so that Zinke can install one of his his cronies and start messing with local wildlife.

A closed door immigration meeting among House Republicans seemed to signal a potential agreement over DACA, but House Freedom crazies ran out and started screaming "terk ar jerbs!" in front of TV cameras. Paul Ryan continues to promise a vote, but moderate Republicans aren't buying it, and are threatening to work with Democrats now that they're three votes shy of a discharge petition.

The Trump administration won't defend the ACA against a constitutional challenge by red states that want to bring back pre-existing conditions as an excuse to jack up or deny coverage.

Healthcare has quickly become the go-to issue this election, with many Democrats forcing the debate on the campaign trail. Meanwhile, Republicans continue to dig in on their "repeal and replace" bullshit.

The DCCC is advising candidates not to say "single payer" over fears that Republican opponents could paint them as commie-loving socialists in swing districts. Fine, "Medicare for All," then.

The GOP is worried voters aren't buying their tax cuts (for the super rich), so Republican leaders are canceling most of the August recess to create a Plan B based around spending bills and court packing.

In talking with some major GOP donors, Mitt Romney noted he thinks Trump could easily be reelected in 2020 due to potentially strong economy, and the Democrats' likelihood of nominating "someone who is really out of the mainstream of American thought." #HesRunning.

The heartless booger eater we call Ted Cruz has started attacking the mother of his Democratic opponent, Beto O'Rourke, for a 2010 tax violation on her family furniture business. O'Rourke responded by noting his mom paid the fines and closed the store last year, adding, "The bottom line is that I’m very, very proud of my mom. I love her more than I can say, and I’m very grateful for everything that she does, including for her entire life running that store, which her mom started in 1951.” And unlike some people, none of his parents were involved in presidential assassinations, allegedly.

Even though there's a record number of women running for office, latent sexism still persists for women in positions of power. Now get your jaw off the floor.

Trump will head to Quebec for the G-7 meeting, but he's expected to try and cut out early before world leaders can corner him about his dumbass trade war.

Chinese state hackers have ratcheted up attempts to steal tech from US companies again, and they've been getting quite good at covering their tracks.

An alleged ISIS fighter with dual citizenship will be released in Syria with a cellphone and $4,210 in cash. An ACLU lawyer has objected to the release stating, "Instead of offering a safe release, they want to dump an American citizen onto the side of the road in a war-torn country without any assurances of protection and no identification." The ACLU says dropping him off in Syria is a death sentence for a man who the US can't even show poses a threat.

Some religious nuts made a movie that supposes Trump was appointed by "God." It's a fantasy.

Colin Kaepernick and his former sportsball teammate Eric Reid want Trump and Mike Pence to testify about screwing with NFL policies in a private arbitration case; they're willing to throw a Hail Mary and take the case to federal court.

ICYMI: WaPo has an absolutely fascinating investigation into places where homicides go unpunished, by putting together information from 50 US cities. They've created a massive database and are encouraging local police departments to contribute information about unsolved murders.

CNN reports that Emmy-winning TV host and chef Anthony Bourdain is dead of an apparent suicide. He was 61.

NASA has announced that the Mars Curiosity rover has found evidence of organic compounds on Mars, as well as seasonal methane releases. TLDR: Alien space farts.

And here's your morning Nice Time! Hosein Mohammadi runs the Sezar Sanctuary in Iran where he rescues abandoned dogs. Many of these guys are in rough shape when they find their way into his care, but he and his team do their best to nurse them back to health and bring a little hope in the world.

We're ad-free and reader supported, but we're working day and night to bring you all the newses and 'splainers you need to get through the day, so kick us some cash for some coffee.