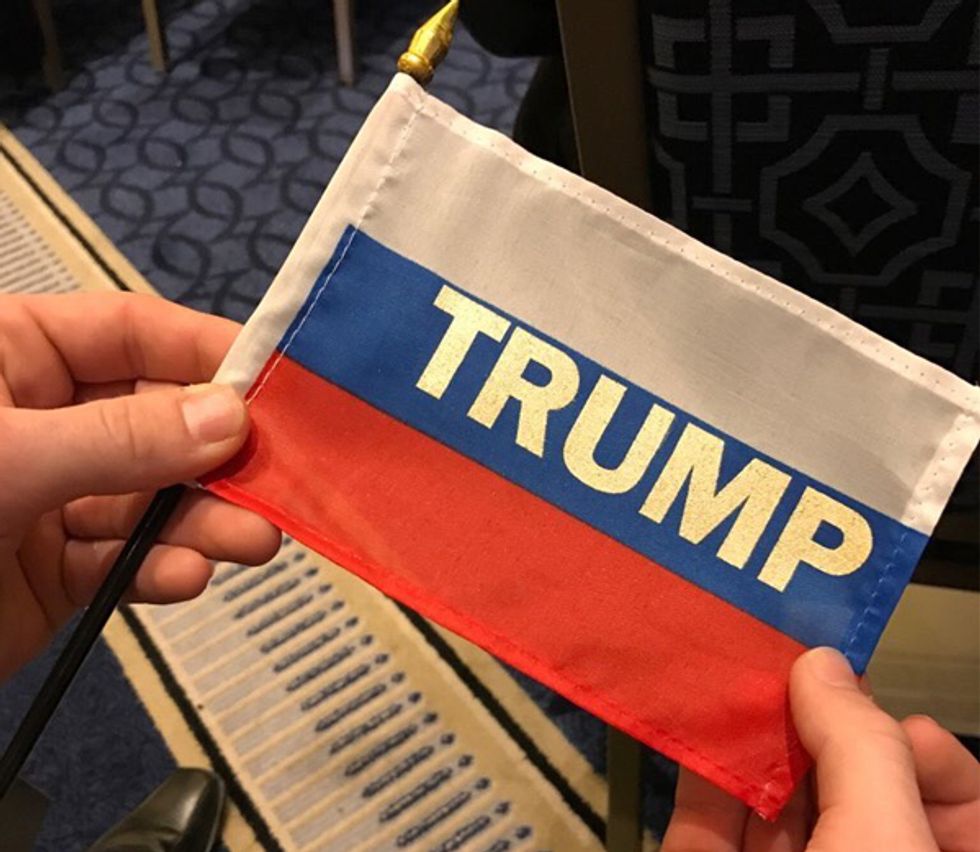 OK, so it was trolling. Of honestly stupid people.

Actually, we already know the answer to the question in our headline: It was epic trolling of the CPAC crowd that had come to hear Donald Trump's incoherent sputterings about fake news and how much he loves the First Amendment (yeah right). A gent with a noticeably fake Russian accent handed out a whole bunch of tiny Russian flags with "TRUMP" printed on the middle blue stripe [why should we even look at the pics? -- Ed.], and managed to distribute enough of them that they quickly started showing up in Twitter photos of the speech. Peter Hamby, head of news at Snapchat (yes, why shouldn't they have a head of news?) posted the shot up top of CPAC security confiscating the flags, but only after this pic of happy Trump fans waving the things:

The New York Post identifies the prankster as "liberal activist Ryan Clayton," assisted by a pal, Jason Charter. They said they distributed about a thousand of the little flags, bless 'em.

Esquire's Jack Holmes was lucky enough to be right there for Clayton's fake Russian accented spiel and subsequent ejection from the hall:

"Trump is a great leader, like Putin in Russia!" he shouted at the camera lens. "That's why Putin pick him to be our leader, too!" Once he was shooed away from his fourth or fifth camera, he took a break—and a phone call. He dropped the accent.

Why was he at CPAC?

"Because Trump great man, very strong, he build great wall, put people in cage, kill the journalists he don't like," he said, instantly re-upping the accent. "Be careful—make sure you say the nice things about the Trump, because in Russia, with Putin, we just kill journalists that say things that are bad about Putin. That way we have country all to ourselves. We don't need no journalists or fake news over there. That's why we come here." As we kept walking, he kept holding the flag high—and photobombing.

Looks like at least someone was paying attention, then. When a CPAC staffer in a red dress printed with elephants showed up to tell Clayton he had to leave, he stayed in character:

Ryan Clayton, @Project_Veritas nemesis gets kicked out of @realDonaldTrump speech at #CPAC for handing out Russian flags. pic.twitter.com/0rLgeqIC3A