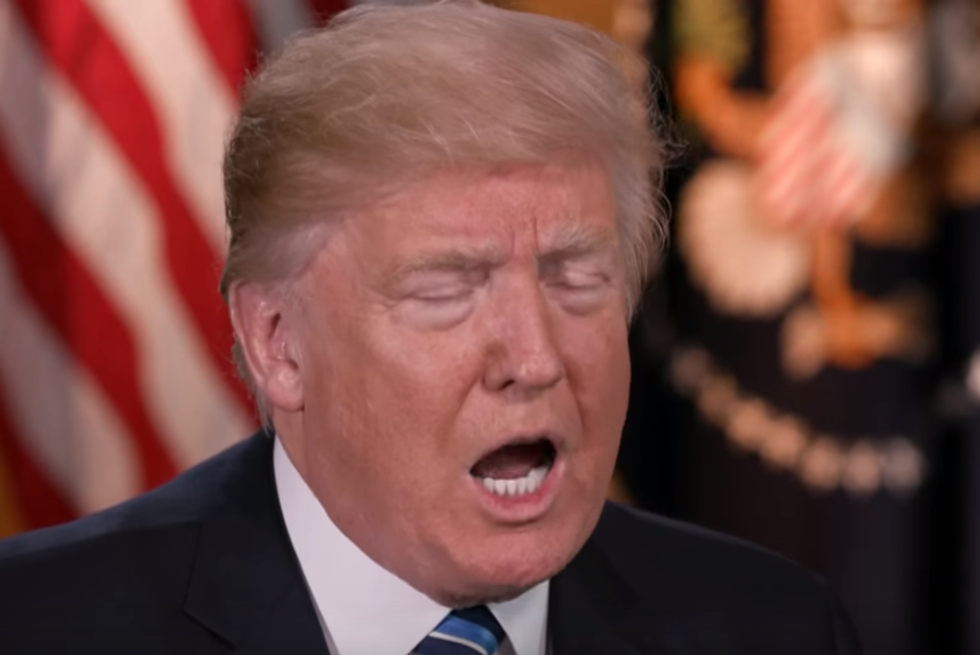 The leaker-in-chief, in the flesh.

How is everyone doing? Did you do Robyn's extensive self-care skincare regimen, and now you feel bright-eyed and bushy-tailed and ready to take on the day? Good, because everything is falling the fuck apart.

James Wolfe, the former Senate Intelligence Committee director of security -- a nonpartisan role, THANK GOD, because can you imagine if this was a Democratic staffer right now? -- has been indicted on three counts of lying to the FBI about his contacts with reporters, after a Justice Department investigation that involved seizing phone and email records of his former girlfriend, New York Times reporter Ali Watkins. Yes, that's right, the government was spying on a reporter. PRESS FREEDOM! GET SOME!

The Senate staffer, James A. Wolfe, was indicted on three counts of making false statements while he served as the committee’s director of security, a position in which he was entrusted with secret and top-secret information provided to the committee as part of its oversight of the intelligence community, the Justice Department said in a statement. Wolfe served in the job for nearly 30 years, from 1987 until last December.

The government alleges that Wolfe lied to FBI agents in December 2017 about “repeated contacts” with three reporters, including through the use of encrypted messaging applications. He is further  accused of lying about providing two reporters with “nonpublic information related to matters occurring before the [committee],” the statement read.

Note that it carefully does not say Wolfe leaked classified information. But we're sure it's all fine and DOJ had a really good reason to take the extremely drastic step of seizing a reporter's communications over whatever "nonpublic information" made its way into the news.

Reporters are pissed off:

This is outrageous, and makes all of us less free. “Justice Dept. Seizes Times Reporter’s Email and Phone Records in Leak Investigation” https://t.co/qPBUU7aI1E

WaPo reports that Ali Watkins was one of the reporters who published based on information from Wolfe. So ... yeah, this is fucked up. Watkins used to work at BuzzFeed and Politico, and both media organizations are highly disturbed by this. For example:

Ben Smith, the editor in chief of BuzzFeed News, said in a statement: “We’re deeply troubled by what looks like a case of law enforcement interfering with a reporter’s constitutional right to gather information about her own government.”

But don't worry, we're sure it's all FINE!

The Senate Intel Committee is presenting a united front, adopting a resolution Wednesday night allowing the committee to hand DOJ all kinds of secret information related to the investigation. Look at this inspiring bipartisanship!

Sens. Richard Burr (R.-N.C.) and Mark R. Warner (D-Va.), the chair and vice chair, said they’d learned of the investigation late last year and had “fully cooperated” with the authorities since then.

“While the charges do not appear to include anything related to the mishandling of classified information, the committee takes this matter extremely seriously,” they stated, adding that the leak probe “will in no way interfere” with the committee’s continuing investigation of Russian interference in the 2016 election and possible links between Russia and the Trump campaign.

Wait, Russia? What does this have to do with the Russia investigation? Oh, just a minor detail! The indictment focuses on a classified briefing the intel committee got on March 17, 2017, where they learned that world's stupidest Russian intelligence asset Carter Page was the world's stupidest Russian intelligence asset, and that Wolfe had a lot of contact with Watkins that day. A couple weeks later, she published a story at BuzzFeed about that time Page was recruited by Russian spies way back in 2013. (Wonkette wrote about it the very next day.) On that day, Watkins and Wolfe also had quite a lot of contact, according to the indictment.

Other reporters not identified in the indictment seemed to have also been pursuing stories involving Page, for instance one where Wolfe apparently told a reporter in October 2017 through an encrypted app that he had served Page with a subpoena for his testimony. Then Wolfe congratulated that reporter, again on the encrypted app, for breaking that news.

The New York Times also reports that the indictment alleges Wolfe "communicated with a ... reporter, using his Senate email account, from 2015 to 2017," which means this started during the Obama adminstration, which does not make it any less fucked up, because while the Obama Justice Department was great on a lot of things, supporting press freedom wasn't one of them. (Eric Holder was particularly bad in this regard.) And in Trump's America, where the president tweets constantly about LYING LEAKERS, shit is getting much, much worse:

What a lovely path our nation is on!

We know He Who Should Go Fuck Himself at 1600 Pennsylvania Avenue despises leaking (every president does, to a certain degree), but right now we need the press more than ever, and to preserve the press, reporters must be able to provide their sources with protection and confidentiality. As WaPo says in its very catchy slogan, "Democracy dies in darkness."

And again, we must reiterate that James Wolfe is not being prosecuted for leaking classified information:

Senate staffer is charged with lying, NOT disclosing classified data. There’s a lot of throat clearing about leaks of

“non-public” and “sensitive” information, which ain’t a crime. Non-public is most of what good reporters report. https://t.co/2K6vpFktgx

We hope we're wrong, but it sure seems like this prosecution is aimed directly at the free press. And because Wolfe lied to the FBI -- dumbass! -- the Trump DOJ is gettin' itself a scalp.

Bad shit comin', y'all. Get ready.