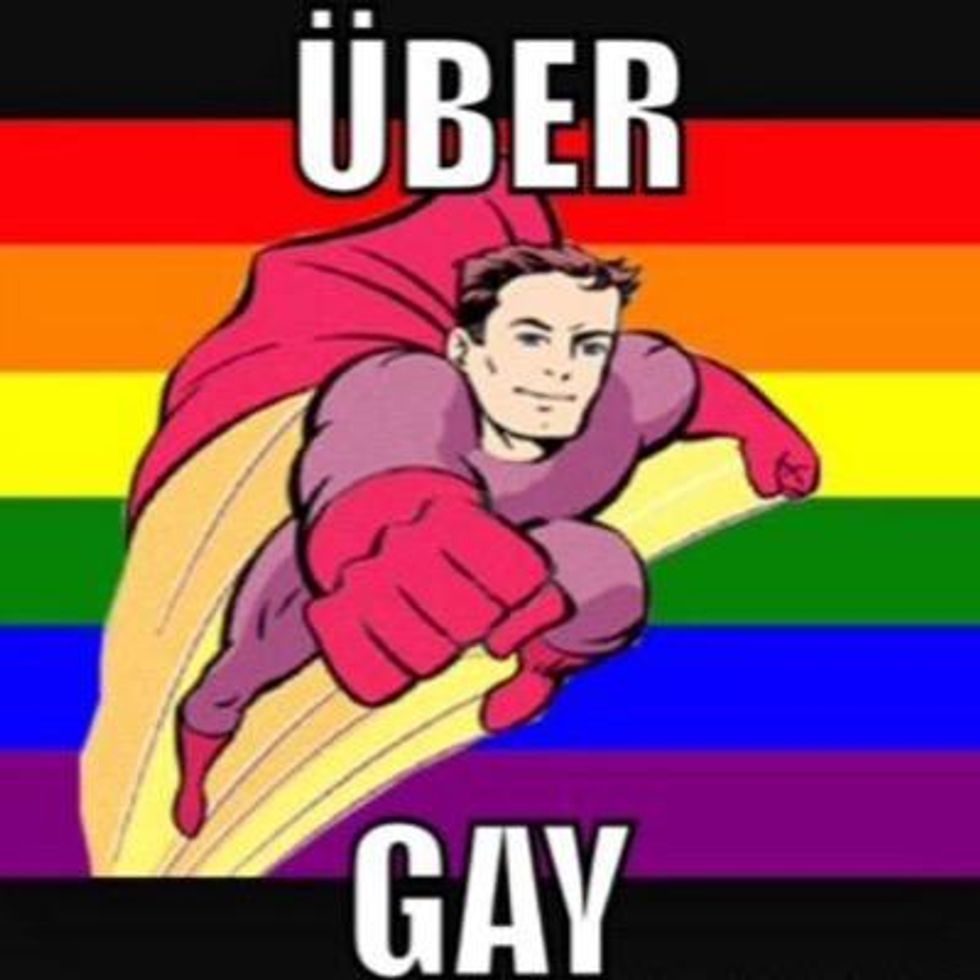 We image searched "Uber" and "gay" and this is what we found. Lazy? Ayup. (Image viathis Twitter user.)

Seems every time Uber shows up in a new place there's a fight. Usually it's over whether the company is pushing taxis out of business or adequately protecting its drivers or customers, yadda yadda. But West Virginia is special, because it wants to also make sure Uber's drivers are able to cart drunk-ass people across strip-mined mountaintops without getting any icky gayness on them:

An Uber driver should be able to deny service to LGBT people, argued a West Virginia lawmaker on Friday. And he won.

Records show 65 state house members voted against requiring an anti-discrimination policy for Uber that would’ve banned discrimination based on sexual orientation and gender identity. Just 27 members of the House voted for the amendment.

OK, West Virginia gays, before you get all worried you're going to be left alone on the side of the road, you should know Uber already has a nondiscrimination policy. But shhhh, don't tell the West Virginia House that!

STOP LAUGHING, this man is serious:

History and reason illustrate the insanity of according special civil right protection to a person's sexual preference. Once homosexual, bisexual and transgender behavior is elevated to a protected status, there is nothing to stop bigamy, pedophilia, or any other sexual practice from receiving the same protection. It should be remembered that when elevating any activity to special status, opposing activities and viewpoints lose protection. If sexual orientation laws become commonplace, then any person who speaks against sexual practice will be vilified. Their rights will be thwarted, and their freedom of religion, of conscience, will be crushed.

Then Fast cites this article, which says pedophiles are using the SAME TACTICS as the gays to get rights for their kid-diddling desires, and ... uh ... 64 of his fellow lawmakers were like, "OH GOD HE'S RIGHT!" In case you forgot, this amendment was about Uber.

[contextly_sidebar id="ZA42sJBPRIHAJvHqPdzsseRQX2V9dXwI"]From what we can tell, this whacknugget seems to think that if gaysexuals, bisexuals, and transgenics are allowed to press a button on their phones and hail a ride, "history and reason illustrate" that it won't be long until the Christians are forced to bake gay wedding cakes, right before they're fed to lions in concentration camps. And holy fuck, if the gays are IN THE PASSENGER SEAT OF THE UBER, what's to stop them from saying, "Oh hey, let's stop at this bakery, so I can buy a penis cake THAT WILL LEAD DIRECTLY TO YOUR PERSECUTION AND MURDER?"

By the way, The Advocate reports West Virginia is not the first state where this has happened. You get five guesses which state is West Virginia-grade stupid enough to pull this kind of shit, SPOILER ALERT it was Oklahoma.

[contextly_sidebar id="sdUPAhA3cA66s5WozOlVF3o2yTYUhlfp"]Of course, the West Virginia House isn't just worried about the threats of homosexuals riding in cars, so it's also passed one of those fancy Religious Freedom Restoration Acts that gives people a license to use their Sincerely Held Religious Beliefs to discriminate against people Jesus allegedly thinks are gross. Those laws are so popularthese days!

So hey, West Virginia gays, when you take Ubers, make sure you give all your drivers five star ratings to thank them for helping you throatcram Del. Tom Fast and all his compatriots with gayness, and be sure to get home safe too, OK?