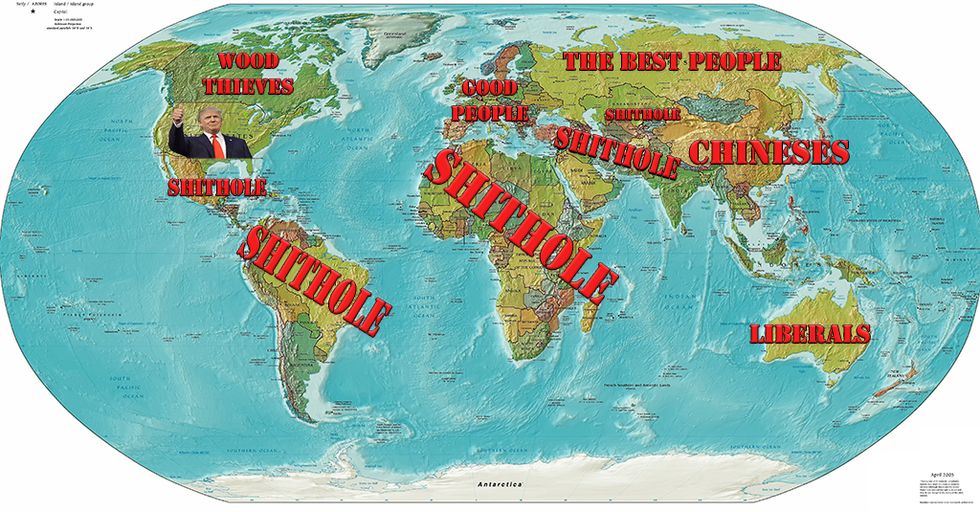 Morning Wonketariat! Here's some of the things (and shitholes) we may be talking about today.

Trump bombed a deal on DACA by reportedly calling El Salvador, Haiti and some African nations as "shithole countries." However, this morning, Trump tweeted a denial that he'd used the word "shithole." Maybe it's not one of the 100 words he knows.

CNN lost its shit in the wake of Trump calling Caucasianally Challenged Not America a "shithole," with Don Lemon throwing a Trump spox off the air, Van Jones and Jason Miller bickering about where shitholes are, and Anderson Cooper getting weepy while remembering his field trip to Haiti in 2010 after a catastrophic quake.

Over at Fox, the beautiful, blue-eyed and blonde talking heads were defending 'Murica from all the third world shitholes that keep giving us all their tired, sick and poors who don't even speak American.

Haitian-born Utah GOP Rep. Mia Love is demanding an apology from Trump, but then again, she's from a "shithole" where everyone has AIDS.

Adam Schiff is fed up and throwing down, highlighting all the ways Republicans keep fucking up the Trump-Russia investigation, and how Trump, his kids, and minions keep dodging and stonewalling the investigation.

Corey Lewandowski will skulk up to the Hill next week to chat with the House Intel Committee about Trump-Russia stuff just after Steve Bannon leaves the place reeking of cheap whiskey and farts.

Eric Trump's charity paid almost $150,000 to use Trump properties in 2016, even though he could've used them free of charge. How curious.

A sad and gin-soaked Dame Peggington Noonington is flummoxed over the media feedback loop that has allowed cartoon characters to run for the highest office in the land, and she damns them all for making politics a grand spectacle for fabulously wealthy elites like her. [Archive]

Shortly after Trump's shitposting on Twitter about Section 702 of FISA yesterday, Paul Ryan had to spend 30 minutes explaining the difference between domestic and foreign surveillance as congressional Republicans scrambled to figure out who said what on Fox and Friends during "executive time."

In yet another bizarre interview with the WSJ full of sentence fragments and half-baked thoughts, Trump stated that he has a "very good relationship" with Kim Jong-un. [Archive]

Trump is expected to reauthorize the Iranian nuclear deal, but he probably won't stop railing against it with bullshit and bluster.

While speaking alongside the Norwegian Prime Minister earlier this week, Trump bragged about selling a "F-52," a fancy fighter jet from the future that only exists in a video game.

A company with ties to Betsy DeVos will now be in charge of shaking down broke college students for every last penny in their pockets.

Missouri's scumbag Republican Gov. Eric Greitens is now under investigation for ALLEGEDLY trying to blackmail his then mistress.

A Florida gun manufacturer is brushing off criticism that its new ad implies shooting anti-fascist protesters by saying it didn't intend to make a political statement. Lol k.

People in Baltimore are pissed after a video was posted on social media showing hospital security guards unloading a woman at a bus stop in freezing weather wearing only a hospital gown, a practice known as "patient dumping."

The gay-hatin' former Ohio state Rep. Wesley Goodman who "You're Fired" himself after he was caught banging his secret boyfriend in his office (and whose behavior was earlier covered up by the Family Research Council) hasn't stopped sending young dudes drunken dick pics.

Trump says he canceled his visit to London because Obama was a cheapskate, however there's rumors that Trump actually canceled due to the small scale of the event, as well as a fear mass protests. Lucky for them, Madame Tussaud's unveiled its Trump statue in front of the new embassy this morning.

Here's an old story but an interesting one in light of our new tax cuts for the very rich. Norway proves an interesting case study for raising taxes on corporations and establishing socialist systems of government. For a dark, frozen country so close to the Arctic Circle, it's actually very successful and a pleasant place to live.

A Swiss group has launched a petition to bar Trump from attending the World Economic Forum in Davos by saying it's too "progressive" for someone like him. Honestly, they should just call it "classically liberal," it's what all the Max Boots are going with these days.

Late this morning a cybersecurity firm suggested that Russian government hackers have been preparing to infiltrate US Senate elections. It's a good thing we spent the last year setting up all those new security procedures for our elections...

Tronc is continuing to take a massive shit all over the LA Times, so the LAT Guild Organizing Committee released an email detailing why relocating the LA Times office in order to pamper executives and punish reporters is a dick move. Reporters will get "communal work tables." Execs will get a goddamn helipad.

Because we just want you to be happy, here's Pauly Shore's impression of Stephen Miller and Vic Berger's totally bonkers take on his interview with Jake Tapper last Sunday.

And here's your morning Nice Time! IT'S FIONA!

ONLY YOU CAN PREVENT ADS by giving us money, so do that. Please, k, thanks!