What Are You Going To Do, Republicans, Count The Tree Rings On Roy Moore's Dick? 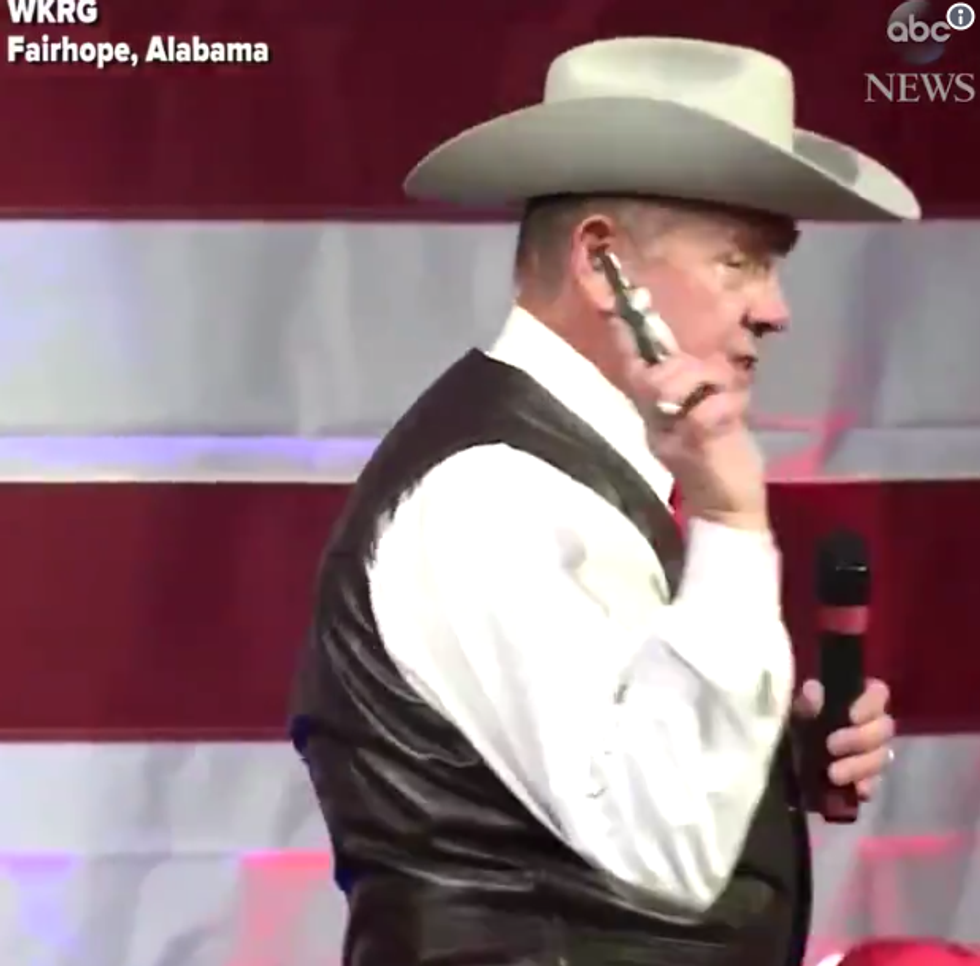 Roy Moore and his gun. (Not pictured: his other gun.)

The reactions to GOP Alabama Senate candidate Roy Moore's alleged kid-touching are coming in, oh boy! Joel Pollak, editor of Breitbart, which was been running defense on this since before the Washington Post even published its story, is apparently going with the "HE ONLY ALLEGEDLY MOLESTED ONE MEASLY KID" defense. These are the same people who pushed #Pizzagate, please remember. We guess it's not so bad when it's not Hillary Clinton in the fictional basement of a pizza parlor with make-believe victims. Wonkette disagrees, but that's because Wonkette has a moral compass.

Alabama state auditor Jim Ziegler is reminding us all that Mary was a young teenager when God fucked her and made Jesus. Somehow we just knew somebody would use Bible-fucking as an excuse.

Republicans in the Senate, on the other hand, are more united in their response, which is that they are shocked and awed and appalled and grossed out by the allegations, IF THEY ARE TRUE. The Washington Post has collected a ton of their reactions:

“If these allegations are true, he must step aside,” McConnell said in a formal statement on behalf of all Republican senators.

Literally all of them are saying "if true." Even Lisa Murkowski. The only GOP senator not to couch his or her remarks in "WHOA IF TRUE" language is John McCain:

“The allegations against Roy Moore are deeply disturbing and disqualifying,” McCain said. “He should immediately step aside and allow the people of Alabama to elect a candidate they can be proud of.”

Look, pretty much all the GOP senators hate Roy Moore. A few idiot Republicans like Ted Cruz and Mike Lee have endorsed him, but everybody else is like UGH and PEE-YEW! They are perfectly happy to keep Luther Strange on, but sadly for them, it's too late to get Moore's name removed from the ballot. As WaPo notes, he could always withdraw! Meanwhile, it sounds like senators are already talking to Luther Strange about running a last minute write-in campaign.

How do these Republicans intend to find out if it's true? Are they going to pants Roy Moore and count the tree rings on his dick, as we suggested in our HILARIOUS headline? "Oh look, that ring right there. You can tell by the markings that that ring signifies a boner attained by kid-diddling. You see how it's different from this ring over here, which is definitely from traditional married child-producing coitus? DO YOU SEE IT? CAN YOU READ THE RINGS ON ROY MOORE'S DICK?"

We are just asking. Because WaPo's report of the allegations is extremely detailed, well researched, and a lot of people are on the record. What else do they need?

WaPo has a fun little tidbit at the end of its piece about who GOP members of Congress are blaming this on:

“If it’s true, the Republican Party doesn’t have any place for pedophiles and he should step down immediately,” said Josh Holmes, a longtime McConnell confidant and his former chief of staff. “Steve Bannon is responsible,” he added about the McConnell foil and former White House chief strategist, for enabling candidates such as Moore who are out of the GOP mainstream.

That view was shared by Scott Reed, a political strategist for the U.S. Chamber of Commerce, who opposed Moore’s nomination. “Here we go — another Steve Bannon special,” Reed said.

"A Steve Bannon Special!" That is what Roy Moore's kid-touching scandal is being called on Capitol Hill. STEVE BANNON PRESENTS ... AN ALLEGED KID-TOUCHER!

Wouldn't be the first time Steve Bannon backed the campaign of a sexual predator. IF IT'S TRUE.

We knew the news was going to get weird(er) and gross(er) this week. We just knew it.