What Is 'America,' Anyway? 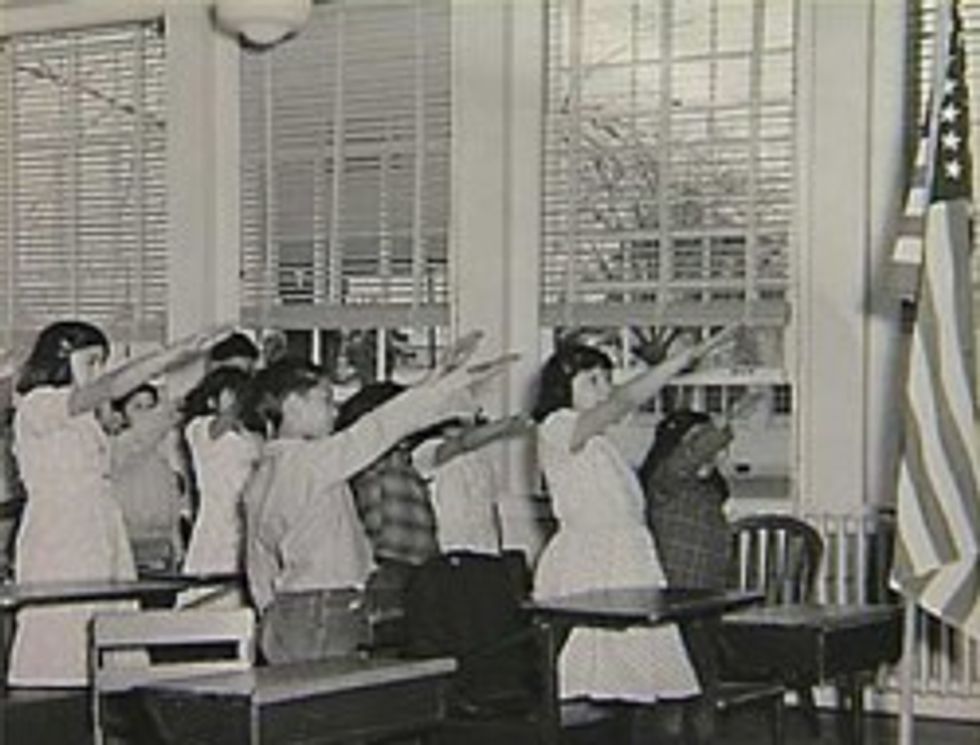 Why did America's young people "take it to the streets" on May 1st? Were they angry about all the illegal wars? Were they frustrated because undocumented immigrants pay more taxes than ourlargest corporations? Perhaps all the young, patriotic Americans protested in the streets because we have "less than five percent of the world's population, but almost a quarter of the world's prisoners"? Or because "the richest one percent of Americans now take home almost twenty-four percent of income," just like in a Banana Republic? Don't be silly! America's young people emerged from their condos to celebrate Death. Too bad Leni Riefenstahl wasn't there with her Flip Cam. Speaking of Nazis, do you know who else died on May First? Hitler! Unfortunately we weren't able to shoot Adolf Hitler in the head and then dump him in the ocean, for Justice -- but most of the high-ranking Nazi monsters were still tried and convicted in a court of law. We probably would have killed every member of the Nazi High Command immediately without a proper trial, if they had committed the unconscionable act of murdering 3,000 people.

Actually, a lot of Nazi war criminals were recruited by our nation's intelligence agencies, to help us build space rockets and torture communists. But that's a different story, for a different time.

Let's talk about those Dead Osama Photographs, and how Barack Obama doesn't want to "spike the football," because he's very humble about sending war helicopters into a sovereign nation, shooting an unarmed human in the face and then dumping the dead body into the ocean.

Some Americans are opposed to releasing these photographs, since making these photos publicly available is what Sarah Palin wants, on Twitter, or something.

There's actually only one good reason to release a photograph of Osama's mutilated corpse, but it's reason enough.

Every mother in Afghanistan should be able to sit down with her children, and point at that photo.

"Do you see this photograph, children? This is the mangled corpse of Osama bin Laden. The Americans invaded our country ten years ago because they said we were protecting him, that he was hiding here. They found Osama bin Laden in Pakistan. They shot him in the head. He was unarmed. The Americans are still unsatisfied, though. They want more. And that is why they are still occupying our country."

Every mother in Afghanistan should be able to point at that gruesome photograph, and say to her child, "The Americans still want more."

But we guess that is what's commonly referred to as "inciting jihad" or "putting the troops in harm's way." Strange times we're livin' in.

Reminds us of something Kurt Vonnegut once wrote, about America's insatiable appetite for revenge. He wrote, "The 'Get Tough America' policy, the spirit of revenge, the approbation of all destruction and killing, has earned us a name for obscene brutality." That's a quotation from a short piece called "Wailing Shall Be In The Streets." It's an essay about the Dresden firebombing, which turned 100,000 German civilians into charcoal. And that was during World War II -- the good war, the war where it was clear that we were Good and they were Evil.

Is anyone prepared to argue that it's still so clear today? Is anyone prepared to argue that The War On Terror is more noble than fighting a fascist regime that conquered entire continents, slaughtered 6,000,000 human beings and had tentative plans for world domination? If so, we would love to hear from you: riley@wonkette.com. Subject: "America #1."

(Here's just One Example: The United States is currently harboring Luis Posada Carriles, a terrorist and former CIA asset who blew up a Cuban airliner. What would happen if Cuba sent a few helicopters into U.S. airspace and "brought Carriles to justice"? We would probably carpet-bomb Cuba into the Stone Age. Then we would reoccupy Cuba. And then we would rebuild all the crooked casinos in Havana, for Freedom.)

And are we supposed to believe that 3,000 American lives are more important than the hundreds of thousands of innocents who have been killed or maimed as a result of our ongoing military adventures? And are we certain that 3,000 American lives are more valuable than the lives of the countless millions who now live in violent war zones, just so we could have the satisfaction of shooting an unarmed Muslim in the face? Because if that's what the American people really believe, well, there's a name for that sort of belief system.

And if you're still butthurt by the idea of releasing these photos, fine. Here's the alternative:

End the wars. All of them. Every American in Afghanistan needs to be shipped home. Today. Ditto in Iraq. Every American solider and sketchy mercenary must leave. Now. The robot-bombing of Pakistan, Yemen, and Libya must also end. Every CIA rape prison must be dismantled. Gitmo must be closed forever. Same with Bagram. We also need to stop murdering Gaddafi's infant grandchildren, if there's any left unmurdered.

If you disagree, what you're essentially saying is that 3,000 American lives are still "unavenged," even after we invaded two countries, continue to bomb a half-dozen more, and shot the mastermind behind the 9/11 attacks in the face. That's excluding (of course) all of the Extraordinary Rendition and torture that our government condones, every single day. Oh noes -- did we just criticize Barack Obama? We must be a Birther/Deather/Racist KKK James O'Keefe Breitbart YouTube Dance Remix!

If we don't stop with all of the mind-boggling bullshit -- if Endless War continues -- photographs of Osama bin Laden's gaping head wound should be released immediately, so that the world can fully appreciate just how bloodthirsty we've become.

It's probably too late to save our crumbling fake Democracy, but maybe not. What's to be done?

What is America, anyway?