What Is Mitt Romney Lying About Today? 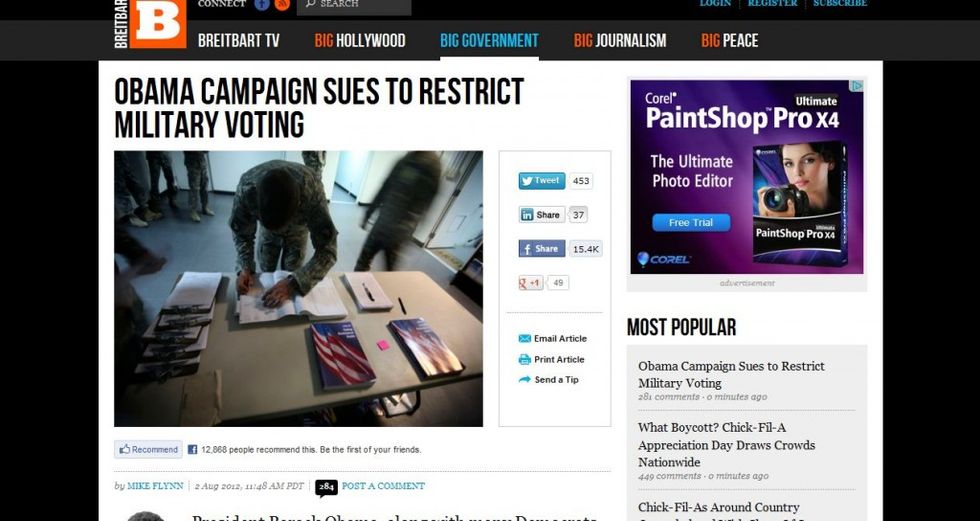 Did you know that Barack Obama hates the US military soooo much that he is trying to take away their voting rights? Mitt Romney said it, so it is a thing that could possibly have been true! (Haha, no it isn't.) Yes, according to Old Mr. "You'll Just Have to Trust Me," the Barack Obama campaign is suing the state of Ohio to take away early voting for members of the military. Now, it gets a little complicated here, see if you can follow along: until last year, all Ohio voters could vote early. Then the GOP passed a bill taking away early voting for everyone but members of the military. Now the Democrats are suing to get early voting reinstated for everyone. We know that was really, REALLY complex, but were you able to follow it? You were? You didn't read that and then have a stroke that made you differently abled, in your brain? Then you are a better man than Mitt Romney.

Here he is on Facebook, the preferred mode of talking at the more special members of one's base.

President Obama’s lawsuit claiming it is unconstitutional for Ohio to allow servicemen and women extended early voting privileges during the state’s early voting period is an outrage. The brave men and women of our military make tremendous sacrifices to protect and defend our freedoms, and we should do everything we can to protect their fundamental right to vote. I stand with the fifteen military groups that are defending the rights of military voters, and if I’m entrusted to be the commander-in-chief, I’ll work to protect the voting rights of our military, not undermine them.

But guess where Mitt Romney picked up this creative take on Ohio's early voting lawsuit? Would you believe ... Ghost Andrew Breitbart?

I think it's unconscionable that we as a nation wouldn't make it as easy as possible for members of the military to vote. They arguably have more right to vote than the rest of us, since it is their service and sacrifice that ensures we have the right to vote in the first place.

If anyone proposes legislation to combat voter fraud, Democrats will loudly scream that the proposal could "disenfranchise" some voter, somewhere. We must ensure, they argue, that voting is easy and accessible to every single voter. Every voter, that is, except the men and women of our military.

Well, that is about what we would expect from Ghost Andrew Breitbart. But Mr. Romney should watch out. He is starting to get a Reputation.