What Is The World Coming To When This Nice Klansman Can't Stay In His Neighborhood Watch Group? 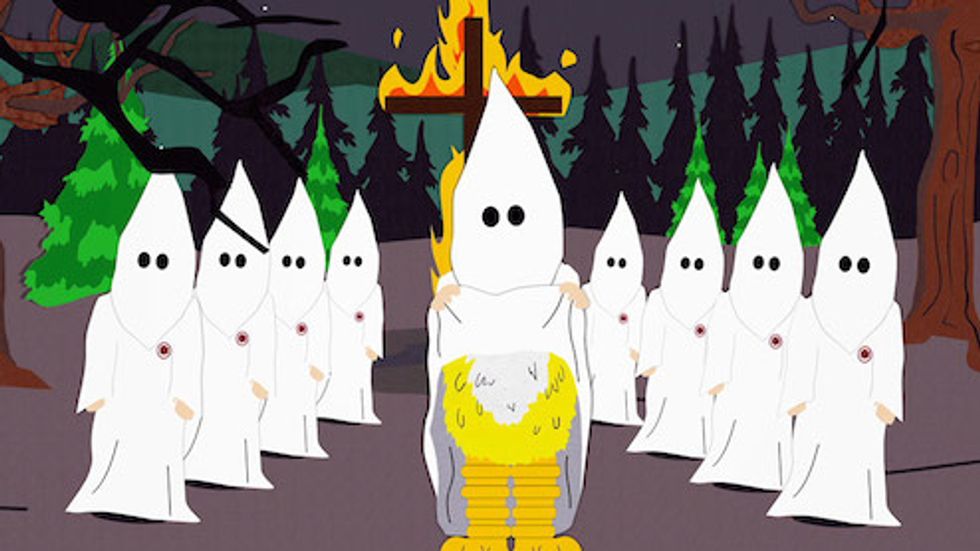 We used to think that neighborhood watch groups were nothing but those busybody ladies that twitch the curtain aside to snoop on neighbors and call the cops 25 times per night on the 4th of July to complain about fireworks. Then, of course, we met George Zimmerman and realized that neighborhood watch people can also be creepy racist vigilantes. Yay?

Continuing in that not-actually-grand tradition, we have Mr. William Walters, Grand Dragon of the East Coast Knights of the True Invisible Empire, which the rest of us know as the Ku Klux Klan. Mr. Walters is very sad because he was informed his services would no longer be required in his local neighborhood watch group, mainly because he had a pesky habit of using his participation in the group to try to recruit new Klansmen.

What is this world coming to when a good god-fearing white man can't use his neighborhood watch to reach out to fellow god-fearing completely fucking racist white men, anyway? That's just plain reverse racism!

He claims that he's being persecuted for his religious beliefs. "We are a conservative Christian group," he says. "My rights were infringed upon. I can't believe in what I want to? This has infringed on my First Amendment rights. It's reverse discrimination."

Sadly for Mr. Walters, the ACLU has declined to take on this landmark free speech case, which is probably some reverse racism as well, and is super unfair because, as Walters notes, the Klan really isn't a hate group any longer.

“I know we have a bad name, but it’s not that way no more,” he said. “When was the last time a black or Hispanic got hung on a tree?”

That is some undeniable logic right there. As long as Walters and his Kool Klan Friendz are not literally lynching people, they're just a an upstanding gathering of Christian gentlemen.

If he can't sue his way back into the good graces of the existing watch group, Walters is just going to form a new town watch that will be KKK members only. We're sure that will go swimmingly.