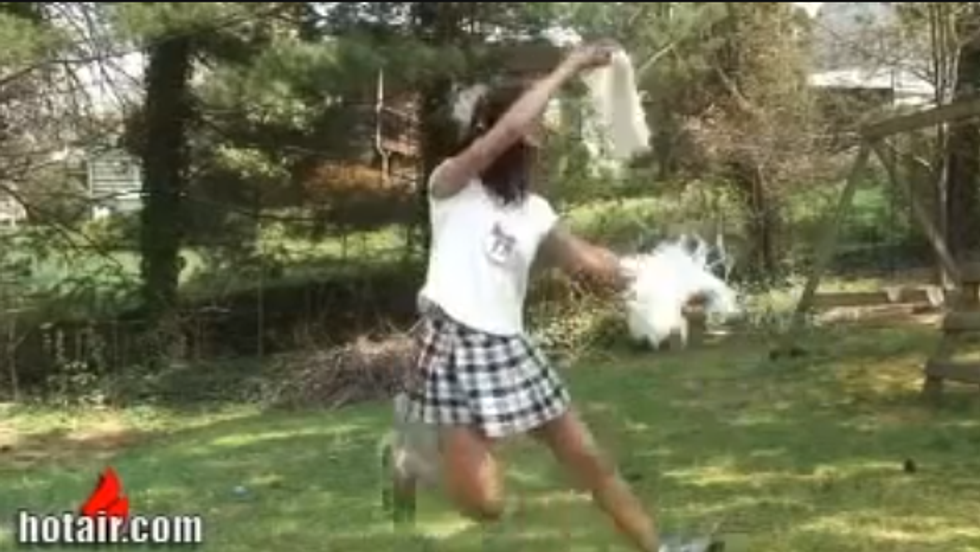 Hi, everyone! First of all, I want you to know I am not complaining about how the last 16 hours have been full of death threats to me and my dog, because I committed the cardinal sin of saying "fuck you" to Sarah Huckabee Sanders. (Or more specifically, "Go fuck yourself." Did you know that is a sexist thing to say? IT IS! At least according to the mouth breathers who inhabit the right wing internet, you know, the people who would still vote for Roy Moore if he raped a child in the middle of Fifth Avenue.)

The reason I'm not complaining is that one of the first things I learned in this business, as a male writer, is that we men escape most internet pile-ons by virtue of our penis. It is dumb as hell, and it's part of the sexist story of where we are right now, and it's true. Welcome to the world of writing Liberal Internets. Every woman we have worked for or with has endured multiple internet pile-ons, and in the past, we, a penis-haver, have mostly just sat there and said, "Jesus that is fucked up! Don't let the haters get to you!"

In the past 16 hours, we have the learned the following things, because Twitchy and Daily Caller readers have told them to us:

Now look, kids, don't worry about me. I have thicker skin than President Babyshits or his special snowflake followers, and I am booked with social engagements all the way through January, so there's no danger of me taking any of these gentle readers' advice. I HAVE SHIT TO DO, and I am more popular than those people are. (Fact.)

Another reason not to worry is that any Facebook, Twitter and email messages I deem to be actual threats will OF COURSE be reported, and if they sent it from their work emails, LOLOLOLOLOLOLOLOL, "Hi, human resources manager, I am very sorry to bother you right now, but I must bring this thing to your attention."

Now, I don't want to spend much time addressing these people's claims that I was "sexist" in my non-gendered critiques of Sarah Huckabee Sanders, because people who read Twitchy and The Daily Caller are intellectually dishonest and also just plain stupid. Most of them didn't even read the posts. Twitchy, which learned #journalism from Michelle Malkin (PICTURED ABOVE), didn't even include a link to the original post. Why would they do that, when it would disprove their thesis entirely? Nah, better to just lie and activate the flying monkeys, we guess.

I don't even think a lot of them were defending Sarah Huckabee Sanders personally. (They didn't care when I used the same headline for Donald Trump Jr., Ivanka Trump, Glenn Greenwald, John McCain, Kayleigh McEnany or Tucker Carlson.) I think they're wounded because I called her a REDNECK. You see, Yankees don't throw around the word "redneck" all that often. Southern rednecks call themselves that, of course, and they love their songs about how they're rednecks. But in the addled brain of a loser white Trump voter, "redneck" is like their N-word. And the person who says it in a derogatory way (in this case me, HI! IT WAS ME!) tends to be even worse than a Yankee. It usually comes from a city boy (or a city lady) who is also Southern. It stings.

That said, we used that word with intention and Sarah Huckabee Sanders deserved it. The big secret to our posts about her (only secret because Daily Caller and Twitchy fans can't read) is that they were about Sanders's disgusting trash behavior at work this week, defending her boss's fascism and racism like it's no big deal. She informed us "Pocahontas" isn't a racial slur, because her redneck ass thinks that's a good thing to say. She told us it doesn't matter whether Donald Trump is tweeting fake videos of Muslims murdering people in order to incite hatred and violence in the human beef tips who voted for him, because he's just trying to tell people about THE THREAT, which is apparently the existence of Muslims.

As to our headline for this post, yep, they drove me to drink. But again, don't worry. I drank with my lovely friends, including two women (which is funny because I have been informed I hate women) and one gay man (because duh, I am a big faggot). For those loving emailers and Facebook messagers who begged for me to lose my job, I regret to inform you that not only will that not be happening, I even SLEPT IN A COUPLE HOURS, because I got drunk with my friends, and my boss (Rebecca, who is also the boss of you) wasn't even mad.

I guess after you read the 12th or 18th message telling you to swallow a warm gun, you finally say, "OK bartender, give me one million drinks. Also a Fireball."

What is the point of this post? Mostly just saying hi (HI!). And also to thank the countless LOVELY PEOPLE who stuck up for yr loyal Wonkette. Hell, a lot of you even upped your donations! (We like that! It pays for us to keep this place running, and also for our bar tabs when America's Moral Voice won't stop emailing you and telling you to die because you are a faggot. Bless you! Keep giving!)

(Also, people hurled the N-word at me a lot? I don't know why, but I will note that for most wingnuts, daily life is an exercise in grappling with the question, "WHY CAN'T I SAY NIGGER? IT'S NOT FAIR!")

God bless all y'all. Even the Twitchy and Daily Caller readers. Unless you sent me a threat from your work email, in which case LOL.

Wonkette is ad-free and reader-supported, so good luck trying to "make us suffer," Twitchers, haha!