What Really Happened To Harry Reid? The Wingnut Theories Might Not Surprise You! 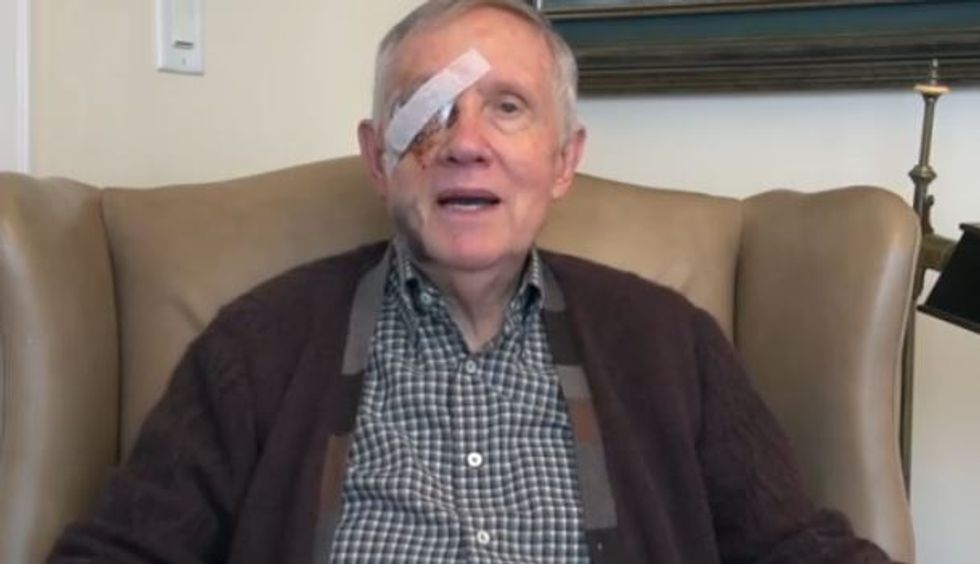 A friend of mine was in Las Vegas a week or two ago. He talked to a number of people there about Reid’s accident, and didn’t find anyone who believed the elastic exercise band story. The common assumption was that the incident resulted, in some fashion, from Reid’s relationship with organized crime. The principal rumor my friend heard was that Reid had promised to obtain some benefit for a group of mobsters. He met with them on New Year’s Day, and broke the bad news that he hadn’t been able to deliver what he promised. When the mobsters complained, Reid (according to the rumor) made a comment that they considered disrespectful, and one of them beat him up. - John Hinderaker, Powerline blog

The left hook came out of nowhere. Something exploded in my right eye with an audible pop. I saw stars. Not the cute little stickers my granddaughter has on the ceiling of her room. Actual stars, striations of light cutting across my vision.

Wham! Something thunked into my side. Another crackling, like Rice Krispies in milk, as a couple of my ribs shattered. I was going to have an outline of brass knuckles impressed in my skin when this was over. The coroner would recognize it. In Las Vegas, coroners saw that outline a lot. When they saw the body at all, that is.

“Harry. Harry, are you hearing me?” That voice, all sharp edges like tenpenny nails being uselessly pounded into gravel, came to me from what felt like far away. I thought about how nice it would be to not hear it ever again.

“Harry!” Louder. Insistent. I raised my eyes. Well, one eye, the left one. The right one seemed to have gone black, as if someone had switched off a lamp.

Knuckles the Muscles, Vinnie’s henchman. So-called because of the brass knuckles he always wielded against deadbeats, stoolies, hard-luck cases who thought they had nothing left to lose right up to the moment that first punch landed. He hauled me to my feet and cocked his fist. A moment later my head crashed into a nearby cabinet. I saw only the blackness of oblivion and dove for it, shameless and eager, like Chuck Schumer spying a TV camera.

“Oh hey, no you don’t!” Some force hauled me up out of the dark. Then the shock of cold water on my face as Knuckles plunged my head into the toilet. I spluttered and struggled and opened my one good eye.

“There you go!” Vinnie pulled a towel off the rack and tossed it to me. I raised my left arm to catch it and groaned. All the ribs on that side must have been splinters and stumps, a clear-cut forest after the timber industry got through with it. That was a good one. I’d have to tell it to that humorless prick Ron Wyden when I saw him again. If I saw him again.

Vinnie watched me dry my face with my right hand. “It’s good to see you again, Harry.”

“Wish I could say the same, Vinnie.”

“Yeah, you’re that.” There was blood on the towel. The brand-new bathroom towels Landra had specially ordered for the brand-new house. Sorry, honey. I didn’t think the mortgage would come due quite so soon …

“I hate being here, Harry.” Vinnie shot his cuffs. “It’s New Year’s Day, you don’t think I’d rather be with my family?”

Vinnie’s “family” were the escorts he employed to spend quality time with every lone conventioneer and businessman spending a few days in Vegas while his wife was home in Springfield or Des Moines running her Mary Kay seminars. I decided it was in my best interest to not mention this.

“But it can’t be helped,” Vinnie said regretfully. “Because you know what you promised me.”

“I tried, Vinnie. I really did. I have people on my staff who have worked on nothing but for the last couple of years. But getting the small-business Obamacare tax credits on the federal exchange for businesses that are, technically, illegitimate…”

“Illegitimate?” he roared. “Illegitimate? The payoffs from my ‘illegitimate’ businesses have paid for this nice new house of yours, you gabagool! The central air, the Italian marble in the foyer…that’s all thanks to my illegitimate businesses! Hit him again, Knuckles.”

“Wait, wait!” I yelled as Knuckles raised his fist, the brass wrapped around his fingers shining. “That’s not what I meant! I just meant…listen, Vinnie, listen. You run a cash business. Everything under the table. You have to admit, for tax purposes, it’s…unorthodox.” Actually, for IRS purposes it was illegal. But also a time-honored tradition here in Las Vegas. “If you were running a business with payroll taxes and reporting everything to the IRS, then they could categorize you as a small business under the ACA and grant you those tax credits for covering your employees. We tried to find a way around it, but…”

“You promised me, you schmuck. You promised me a solution.” He sighed and ran his hand over the greasy field atop his head. “You have any idea how much I lay out in medical costs for my girls every year? You ever try employing escorts? They get every disease there is. They need more antibiotics than…than…”

“A herd of dairy cows in Wisconsin?” I suggested helpfully. What the hell, Ron Johnson wasn’t around to get offended.

Vinnie laughed, loud. Even Knuckles, with a face like a frying pan, cracked a smile. I began to hope. If I could get them out of here soon and to a hospital, maybe doctors could still save my eye…

“A herd of dairy cows in Wisconsin. Good one! But yeah, you’re right. And sometimes they get a date who don’t treat them so nice, you know? Kinda like me and Knuckles are treating you right now. Then they need time off to heal, and a girl taking time off her feet ain’t making time off her feet, you got me? And there’s plastic surgeries, and there’s always a kid or three, and the kids need to see doctors, and I gotta pay for that so the girls’ll stay happy. You got any idea how much it costs to see a top-notch pediatrician these days?”

“Here’s the thing, Vinnie. If you would put together a business that ille…that’s not escorts, but is like a cover. That way you could incorporate, get legit insurance, keep it under fifty employees and qualify for the credits…”

“What, like an office or something? Then I gotta pay overhead, unemployment, disability…”

“Not if I’m claiming all the girls are contractors, you putz!” Vinnie leaned in close to me. I tried not to visibly recoil at the mixed odor of sweat and breakfast sausage. “The taxes I can get around. But my girls need the medical insurance. Now, here’s what you’re gonna do. You’re gonna go back to D.C. and announce your retirement.” He held up a hand to cut off my protests. “Retirement, Harry. It’s time this state had a senator who remembers who pays the bills around here. But you’re not gonna leave right away. Just at the end of your term. That gives you two years to find a solution to my problem. Two years to get me those tax credits on the exchange without turning me into Joe Q. Small Business Taxpayer. I look like a guy with a carpet-cleaning service and a mortgage and two kids and a scummy pool in the backyard?”

“No, Vinnie.” I tried not to glare at him, or at Knuckles. Would have liked to see you come after me when I was in my boxing prime, you goons.

“Correct.” He nodded at Knuckles. Next thing I knew I was on all fours on the floor, gasping for breath. Now my left side ached to match the right. I wondered if I had any ribs left.

“So you go back to D.C., and you spend two years working on nothing but my little problem,” Vinnie said as he and Knuckles moved toward the open bathroom door. “I’ll tell your security detail to drive you to the hospital. They'll tell everyone you had a little accident working out at home. You're a fitness freak even for an old guy. Oh yeah, you were probably wondering how we got past those guys, weren’t you?” He grinned. I had been so focused on getting out of this thing alive that I had forgotten about my security detail.

“Those are my boys out there, that’s how. See why I need those tax credits, Harry? Running a business like mine is expensive.” He laughed again. I could hear him all the way down the hall and out the front door, laughing uproariously, the sound bouncing off the Italian marble.

Retirement. Maybe that was a good thing after all. Maybe politics really was a young man’s game.