What Stupid Pointless Ebola Freakouts Are We Having Today? 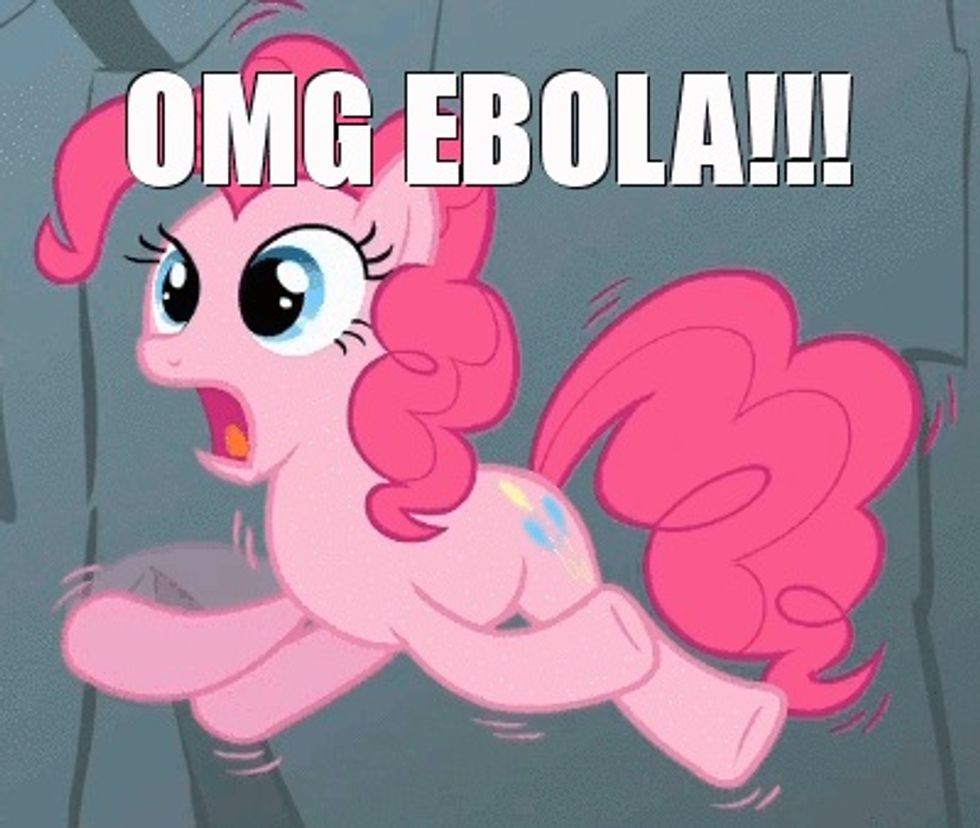 Now that the first group of people to be exposed to Thomas Eric Duncan -- including his fiancée and other members of his family in Dallas -- have made it through their 21-day quarantine period without developing the disease themselves, you might think that maybe people might be calming down just a little bit, maybe. But then, maybe you are not a panic-mongering moron, so you may not be typical, you un-American weirdo. Maybe you're not rushing out to buy flimsy "protective" gear or Vitamin C (or "colloidal silver" to turn your skin blue), but plenty of people are -- or at the very least, scammers hope so. And it's never a bad time to have a good old-fashioned panic over every last rumor and sneeze, like the nice people in Mississippi who pulled their children out of the local middle school when they learned that the principal had recently visited Zambia, which doesn't even have any Ebola diagnoses, but is very definitely in Africa. Or the timid souls of Strong, Maine, who insisted on turning their town's name into a possible Twilight Zone locale when they convinced the school board to place an elementary-school teacher on a 21-day leave because he'd been to an educational conference in Dallas. Those monsters should be coming down Maple Street any minute now.

And then there's Pennsylvania congresscritter Mike Kelly, who shared his medical expertise with Newsmax on Friday, explaining that the government had better stop trying to confuse people with mere facts when there's a good panic to be had:

By golly, if any such virus actually existed outside Hollywood, then maybe we'd have something to worry about. Ebola causes organ failure, but no, victims don't turn into exploding Hefty garbage bags of Ebola goo. You could look it up. Then again, as Texas Rep. Blake Farenthold warned a week or so back, just to be on the safe side, maybe we should assume that Hollywood knows way more about how Ebola works than the CDC does:

Every outbreak novel or zombie movie you see starts with somebody from the government sitting in front of a panel like this saying there's nothing to worry about.

Honestly, if you can't trust 28 Days Later for medical advice, who can you trust?

Duh -- you can trust the Stupidest Men On the Internet, who have mostly been alternating between just three topics for the last week or so: stories about violent black mobs in St. Louis and Ferguson, stories about ISIS atrocities, and stories about how Obama is lying when he says that three cases of Ebola don't constitute an "outbreak" or "epidemic." Today, Stupidest Man on the Internet Jim Hoft lets us know we should be shocked and terrified because "Obama Ebola Czar Has NO PLANS to Travel to Dallas – US Ebola Epicenter" -- obviously, the fact that he's sending an aide to Dallas means that the Ebola Czar is just sleeping on the job!!!!! Last week Hoft freaked out because a Nigerian man had a heart attack and died on a U.S.-bound airliner. BUT HE VOMITED before he died, so scary! Never mind that Nigeria has controlled its Ebola outbreak -- it was just declared Ebola free today, in fact -- or that even Hoft acknowledges in his lede that the passenger had a heart attack. The piece absolutely has to end, in boldface, "Still Barack Obama won’t ban flights from Ebola stricken countries from West Africa." Why isn't that man protecting us from the heart attack epidemic, huh?

Sunday, Stupidest Guest Blogger On the Internet Kristinn Taylor revealed that even though "over one hundred Americans are either in voluntary quarantines, face travel bans or are being monitored over contact with the three Dallas Ebola patients," Obama insists on saying there's no epidemic, just because only three people actually have the disease. Doesn't that lazy Obama understand that an epidemic is defined by how many people are being monitored, not how many people actually are sick? Besides, the best definition is the number of people who are scared shitless.

Even worse, the U.S. Military, which is foolishly trying to fight Ebola instead of just letting everyone in three countries die, clearly is not as smart as some blogger in St. Louis, Missouri. Just look at this shocking news!

Why, that's just a DEATH WARRANT for our brave soldiers, who apparently need to be in full hazmat suits while building hospitals in Liberia. Hoft is utterly astonished that Barack Obama would personally withhold protective suits from troops doing construction. Just listen to the devil-may-care lack of concern for Our Troops from their commanding general, David Rodriguez, at a Pentagon briefing:

“They don’t need the whole suit – as such – because they’re not going to be in contact with any of the people,” the commander of U.S. troops in Africa said.

Soldiers from the 101st Airborne will primarily be building hospitals, ultimately leading what could be a contingent of 4,000 American service members. They’ll be housed either in tent cities at military airfields or in Liberian Ministry of Defense facilities, Rodriguez said.

Soldiers’ health will be monitored through surveys and taking their temperature on their way in and out of camps. If a service member does get sick, Rodriguez said they will be flown home immediately for treatment.

Madness! Doesn't Obama know that you can get Ebola from hammers and 2X4s? This is a well-documented fact!!!!! And then your organs will liquefy and you'll become a zombie, after which you'll start voting multiple times in Chicago!

In a gratifying turn of events, it appears that about 80% of the comments on that article are dedicated to an argument over whether pumping yourself full of colloidal silver will prevent Ebola. Oh, sure, the FDA and AMA both say colloidal silver is quackery, but they're in league with Big Government and Big Pharma, so go ahead and take the shit -- just don't be too surprised to find that you're now a blue voter in a red state.