When Will You Ladies Stop Humiliating The Weird Dilbert Guy With Your Gifts Of V-Neck Sweaters? 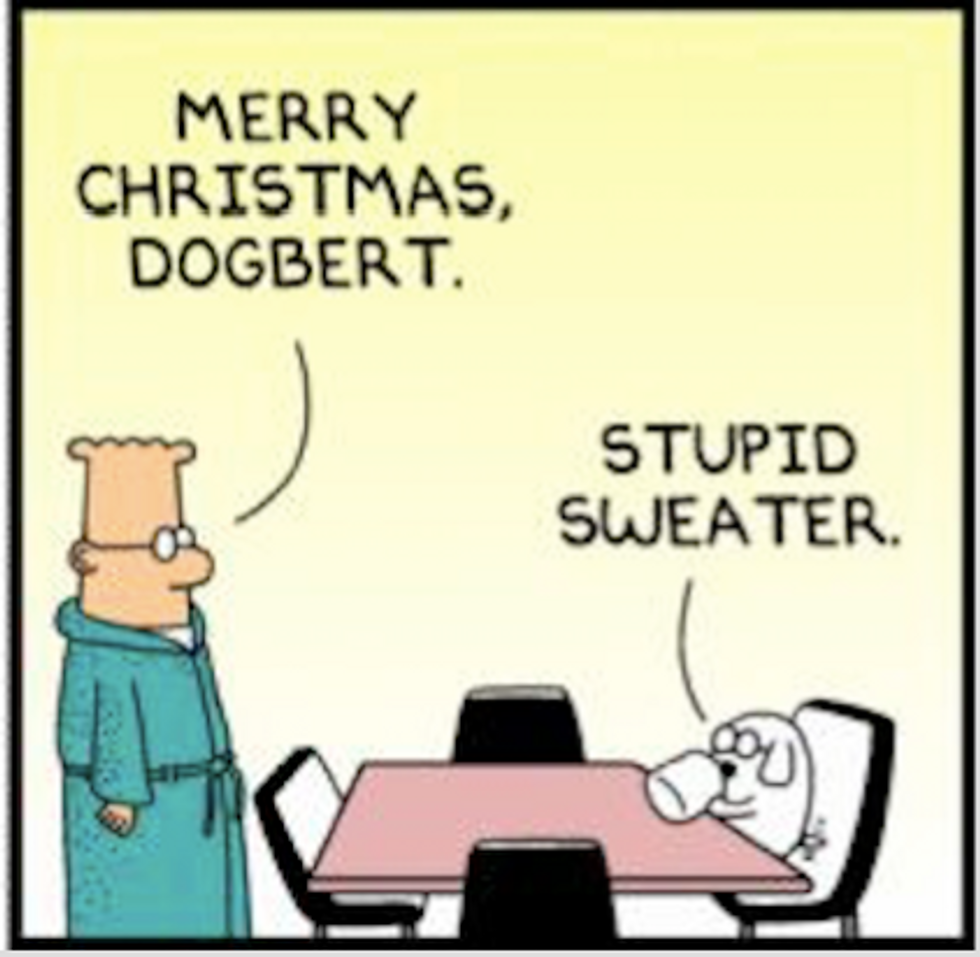 Only a dog deserves to be humiliated like this.

Scott "Pitiful Pearl" Adams is at it again, with a cool new blog post explaining how Trump -- whom he does not endorse because he thinks liberals will straight up murder him if he doesn't "endorse" Hillary Clinton -- will totally win this election. Why? Because women humiliate men by buying them V-neck sweaters and making them go to the store, and they are going to strike back against us in the voting booth. Or something!

This all came to him while watching this commercial for Cascade dish detergent, in which a man wearing a V-neck sweater is cruelly shamed by his wife for buying crappy dish detergent, and sent back to the store to get the good shit (Cascade, obviously).

Check out this commercial for dishwasher detergent. And take careful note of the American man’s v-neck sweater. That’s the uniform of a man who is owned by a woman.

You’re laughing because you know it’s true. How many of the married men reading this blog have received those same sweaters as “gifts” from women? Personally, I’ve received about 25 over the years. None from men. I received three of those sweaters so far this year. I throw them away. Nice try.

OK, first of all -- it's not like women are super fond of those "Oh, dumb man can't fucking buy the right dishwasher detergent" commercials either. Not just because of gender stereotypes even, but because "playing dumb" and acting like you don't know how laundry works or where the olive oil is has actually been a convenient way for men to get out of doing stuff around the house since pretty much forever, and it is annoying.

Second, I am pretty sure lots of dudes buy V-neck sweaters on their own. Personally, I have never purchased a V-neck sweater for any guy, that I can recall. Maybe my dad? I think the only time I was ever particularly insistent on a shopping trip was when my best dude friend in college would not stop wearing shants. AND HE THANKED ME LATER. Still thanks me to this day!

However, if you or I were dating Scott Adams, I am sure we would agree that the innocuous V-neck sweater the guy in the commercial is wearing is infinitely preferable to THIS:

Yeah, probably if you wear a lot of blousy denim button-ups, women you date are gonna get you some clothes that are not total ladybonerkillers for your birthday. The idea of having sex with Scott Adams is off-putting enough, you don't have to add bad fashion into the mix. Seriously.

Now, according to Adams, Donald Trump is going to be president of the United States because too many men have been humiliated by V-neck sweaters and dishwasher detergent commercials -- and though they are too browbeaten by their harpy wives to admit how sexcited they are for Donald Trump to be their supreme leader, they will surprise us all by going and voting for him in SECRET. Because having an blowhardy reality star for a president will be humiliating for no one!

The dishwasher soap commercial should give you a hint of how big that turnout might be. You might not notice the size of the coming tsunami because American men generally don’t voice their humiliation in public. That would just make it worse.

But in the privacy of the polling booth, the men who don’t talk are free to act.

I predict you will see the largest male turnout of any presidential election in American history.

Wow, really? In all of history? Like, even from back when they were the only ones who could vote? My, that sure is impressive! And all because we bought them sweaters and there are annoying commercials on TV! Who would have known? Women must be a lot tougher than men, as we have watched terrible and sexist commercials for decades without being driven to vote for a fascist.

In my opinion, Hillary Clinton has already done a great service to the country because – win or lose – she already effectively broke the glass ceiling on the most visible and important job in the nation. If she falls short of the presidency, few people will think it was because of gender discrimination against women. Clinton has been a strong role model for women and deserves massive credit for that.

STOP TELLING ME IN YOUR MIND THAT WOMEN HAVE IT WORSE IN THIS COUNTRY THAN MEN!

I’m sure women do have it worse than men in this country in lots of ways. But it isn’t a competition. My point is that the psychological state of American men in 2016 is one of persistent humiliation for simply being male. That sense of humiliation might be more imagined than real – which is not an important distinction – because either way it affects how people act.

PERSISTENT HUMILIATION OMG. I don't even know what to say to that. I mean, I guess it's understandable. Women only have to deal with minor humiliations, like constantly being told by men what we should do with our bodies in every conceivable way possible, being paid less, and seeing rapists let off the hook with six month jail sentences because a judge was concerned about damaging their bright future. Certainly, this cannot compare to the utter degradation of the soul that happens when a person buys you a sweater.

Thankfully, Donald Trump will Make America Great Again, and we'll go back to having commercials like this, which hopefully will keep the mens from having to take revenge on us in the voting booth again.