Where Is Chuck Grassley Going Insane Today? Oh, On 'The Corner' 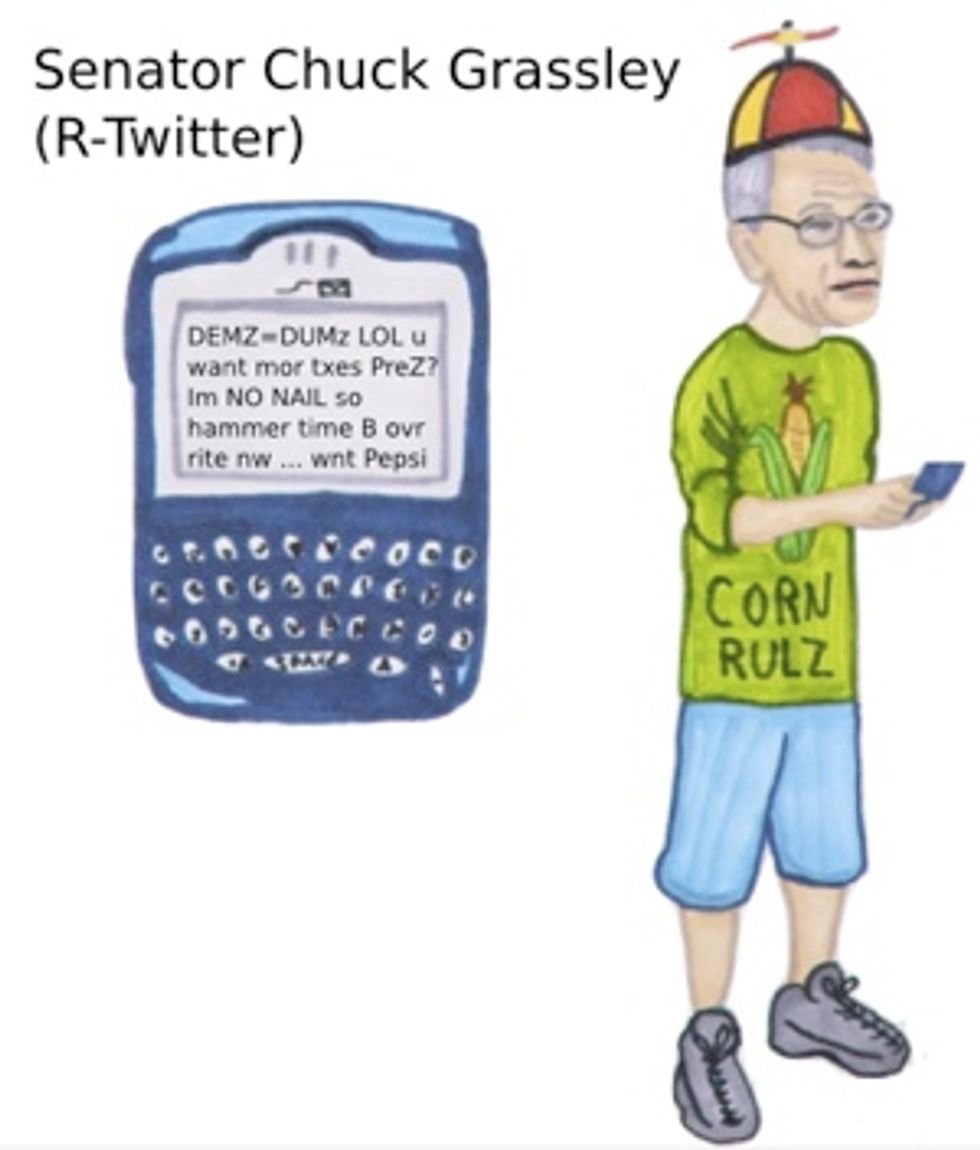 Confused old person Sen. Chuck Grassley, who is two or three moreannoyingmediaturns away from finally getting booted from health care negotiations, has found another outlet receptive to his newfound bad-faith curmudgeonly psychobabble: National Review's The Corner, the #1 blog on the Internet. In an interview with the site's Robert Costa, "Grassley says 'the jury is out' on whether he might leave the negotiating table. 'I'll make a decision on walking away if it becomes clear that I can’t get a good agreement.'" Harumph! So let us ask, for the 850,000th time in six months, what in hell would be a "good agreement" for you, Chuck Grassley?

So what are the make-or-break issues for Grassley moving forward? Grassley says there are four: no public option, no rationing, no government bureaucrats getting between doctors and patients, and tort reform.

GAHHH. This is Grassley's incredibly irritating problem: it doesn't make for a jovial and productive negotiating atmosphere when 50% of your "make-or-break issues" are the most repeated bad-faith slogans of the "kill any sort of reform for political reasons" camp. Not even slogans, actually, just random fictional nonsense that's nowhere in the bill, and therefore cannot be negotiated. He might as well have said, "no public option, no humans with wings and laser-gun eyeballs, no Bolivian fire-breathing dragons with mass greater than 150 tons allowed north of the 42nd parallel, and tort reform."

As far as the two "real" things: enough has been said about the public option. But with tort reform, yeah, why won't Obama throw Republicans a bone on tort reform to bring them onboard? Surely they'd be willing to trade back some support if he did that.

Oh? What is that, Karen Tumulty of TIME in an article from May?

When Barack Obama informed congressional Republicans last month that he would support a controversial parliamentary move to protect health-care reform from a filibuster in the Senate, they were furious. That meant the bill could pass with a simple majority of 51 votes, eliminating the need for any GOP support. Where, they demanded, was the bipartisanship the President had promised? So, right there in the Cabinet Room, the President put a proposal on the table, according to two people who were present. Obama said he was willing to curb malpractice awards, a move long sought by Republicans that is certain to bring strong opposition from the trial lawyers who fund the Democratic Party.

What, he wanted to know, did the Republicans have to offer in return?

Nothing, it turned out. Republicans were unprepared to make any concessions, if they had any to make.

Conservatives, Grassley said, shouldn’t worry about their values being forgotten even if he is “sitting at the table” with Democrats. “I’m in the room, I know what’s going on — don’t they want to know what’s going on? Since January, from 4:30 p.m. to 5:30 p.m., any Republican in the Senate that wanted to meet with me — or Senators Enzi or Snowe — to discuss health-care could do so. We’re in a task force on health care to report and to listen. Our group’s work with Senator Baucus and the Democrats enables Republicans to know exactly what’s going on with health-care discussions across the aisle.”

Then, with the knowledge, we proceed to make MISCHIEF!

Grassley on Obamacare: ‘The Straw that Broke the Camel’s Back’ [The Corner]