Which Members of Congress Are We Yelling At Today? ALL OF THEM, KATIE 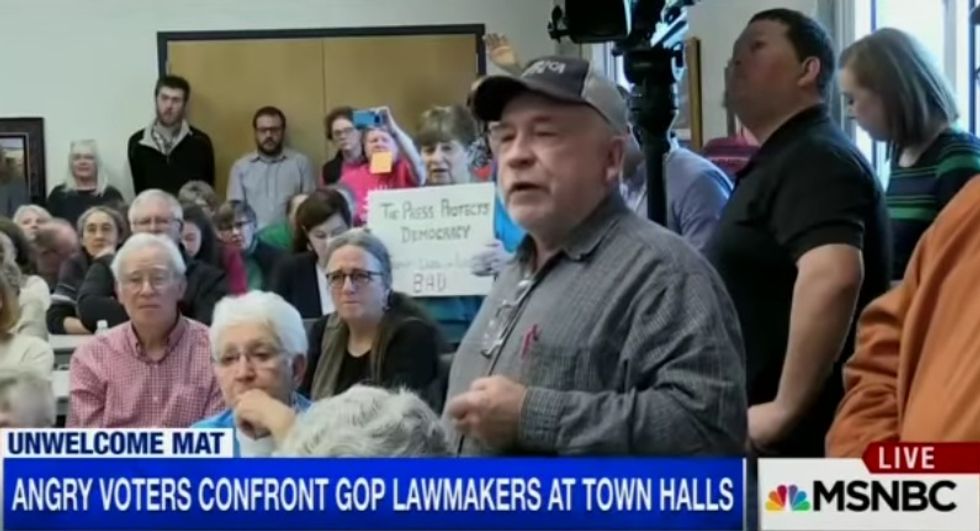 Anyone yelling at Chuck Grassley is OK in our book

It's Congress's President's Day week off, and progressive folks are swarming to their congresscritters' town halls -- whether the congressfolk show up or not -- to let their public servants know we're not about to give up the Affordable Care Act without a fight, that we like immigration and refugees just fine, and to remind Republicans that Donald Trump did not win a majority of Americans' votes. This must be costing George Soros a bundle! All across the country, Republicans who have bothered to hold town halls are getting an earful, and those who have tried to avoid meeting with constituents are hearing from them anyway and getting called out for being too chicken to meet the public. Let's see who's getting yelled at and how!

Her district may have voted for Donald Trump, but her town hall in Fairview drew a decidedly unsympathetic crowd:

Ms. Blackburn, an eight-term Republican, was sharply questioned about a wide range of issues that have unsettled Mr. Trump’s first month in office, including health care, the environment, education and the president’s links to Russia.

At many moments, her replies elicited boos or shouts to “tell the truth.”

“We’re not stupid; you have to do better,” Renee Armand said at one point, interrupting Ms. Blackburn as she was defending the new education secretary, Betsy DeVos, for bringing “a true love of education reform.”

OK, we can see why that didn't go so well for her, then. Still, when she spoke to protesters outside the town hall, she was careful to say the right things for a politician who's just gotten a seriously unfriendly reception.

I have always said, you may not agree with me, but you're always going to know where I stand [...] Having a good, solid, respectful debate, that is something that serves our country well.

“You’re going to need them in the next few years,” Mr. Petersen told the senator, drawing laughter from a crowd packed into a room at a firehouse in Iowa Falls, north of Des Moines.

Mr. Grassley later quipped that “the only time I need Tums is when I have chocolate ice cream before I go to bed.”

Assume Grassley fed. Petersen, the vice chair of the Iowa Democrats' Rural Caucus, had a few thoughts about repealing the Affordable Care Act, which Grassley had back in 2009 warned might include "death panels," even though he'd also called them a myth.

“With all due respect, sir, you’re the man that talked about the death panels,” Mr. Petersen said. “We’re going to create one great big death panel in this country.”

And he had more to say as well:

"Don't repeal Obamacare. Improve it, for God's sake!" Peterson said, getting a nice big cheer from the crowd. Grassley also gets credit for not going with many Republicans' denial of the legitimacy of the town hall crowds:

“I want to make clear it’s all legitimate,” he told reporters after his second meeting of the day, in Garner, Iowa. “If Hillary Clinton had been elected president, there’d be people from the conservative end of the spectrum probably be doing the same thing.”

That's pretty darn reasonable! Let's hope he was actually listening to that stuff about not leaving people without insurance!

The alleged leader of the free world offered what sounded like scathing criticism of the crowds showing up at town halls, at least until you give it several whole seconds' thought:

You mean people actually organize protests sometimes? Almost like the town hall organizers plan the town hall? Shocking, shocking! Next we'll no doubt find out that people who have similar beliefs organize themselves into political parties! Apparently, this incredibly stupid attempt to claim that any protest that didn't occur spontaneously is illegitimate has really caught on with Republicans, who certainly didn't mind so much when Americans For Prosperity and other groups organized anti-Obama protests in 2009. Shocking, really, that people might actually plan a protest!

You are all jealous! Jason Chaffetz looks good!

As New York magazine's Eric Levitz says, it's a bit like complaining that Martin Luther King lacked legitimacy: “The so-called March on Washington was actually, in numerous cases, planned out by civil-rights activists.” But at least it's a bit better than claiming that people have to be paid to care about the political issues they actually care about, which is just plain stupid.

“Some people are clearly upset, but there is a bit of professional protester, manufactured base in there,” he said. “But obviously there are people who are upset, but I also think that when you look at some of these districts and some of these things, that it is not a representation of a member's district.”

News shocker, Mr. Spicer: Even majority-Republican districts still have Democrats. Also, you can't gerrymander senate races. And believe it or not, people actually like having health insurance.

The Internet, Everywhere At All Times

We wouldn't dream of concluding this roundup without mentioning this fun toy from the Washington Post, the YELL-O-MATIC™, which collects a whole bunch of links to videos of politicians getting yelled at, mostly from this year, but also with some older vids, like Joe Biden getting yelled at at Netroots in 2014, or people heckling Mitt Romney in Iowa in 2011 (the source of "Corporations are people, my friend"). Philip Bump even encourages you to drop him an email if you find a video that needs to be added, so we're going to look up Barney Frank telling that Obama-is-Hitler lady he's had more productive conversations with furniture. Of the bunch, we have to agree that this 2009 clip of Toledo mayoral Candidate Ben Konop bedeviled by a single loud shouty guy is the one must-see heckling. It's a thing of frustrating beauty that would have worked perfectly well as a Bob & Ray sketch:

You say you don't know who Bob & Ray were? Get off my lawn.

Wonkette is entirely reader-supported, with no ads! You want to keep it that way, don't you? Of course you do!