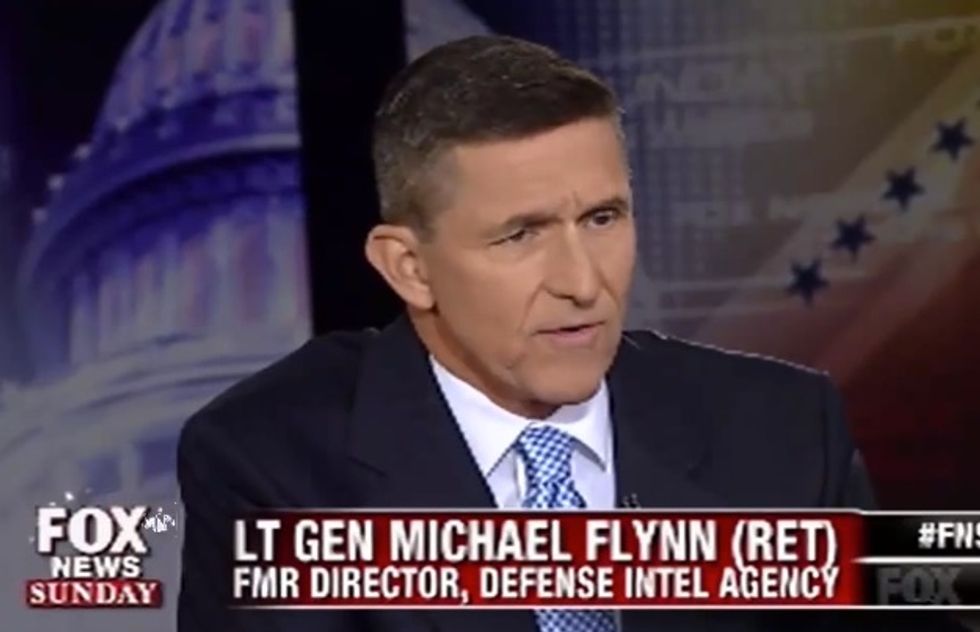 No, this time it's about Flynn being a foreign agent for TURKEY, not Russia! Silly us!

WHAT DID WE TELL YOU ABOUT THE TRUMP WHITE HOUSE LYING ABOUT MICHAEL FLYNN? Let's go on an exotic journey, all the way back to this morning, when we reported that Donald Trump was supposedly FOR SHOCKED to find out that his former National Security Adviser Michael Flynn was a foreign agent, even though Wonkette and like every other media organization to the left of Breitbart reported that in November or so.

At that time, we reported that the White House said Orange Prince Pussgrab of the Mar-A-Lago Pussgrabs had NO IDEAR Flynn had been working as a foreign agent when he was nominated to the NSA position. We surmised that Trump was lying, because A) he always is and 2) Flynn was around the entire campaign, and during that time he and his company were also lobbying on behalf of the Turkish government, and unless Trump is THAT STUPID, there's no way he wouldn't have known this. At the time, White House Press Secretary Sean Spicer also said he's pretty sure nobody knew Flynn was a foreign agent, and refused to answer whether Trump would have cared even if he did know, but Trump didn't know, yeah right, ALLEGEDLY.

Welp, the story, it's mutating, and the White House likely hopes y'all don't notice.

This afternoon, the AP reported that ayup, the Trump transition team was indeed told before the inauguration -- sometime between November 8 and January 20 -- that Flynn would probably have to register as a foreign agent if he wanted to be national security adviser. That comes from a "White House official and a person with direct knowledge of the discussions," FYI. Per the AP:

A White House official said Flynn's personal lawyer contacted Trump transition attorneys before the inauguration about the possible filing as he was being considered for appointment as Trump's national security adviser. The official said the transition team was not made aware of the filing's details and Flynn's related business dealings, and advised Flynn's lawyer that it was a personal matter they would need to handle. The official was not authorized to discuss private conversations and spoke on condition of anonymity.

An hour after it published that story, the AP tweeted this:

OK so, this is weird! Flynn's lawyer sent a Snapchat about him being a foreign agent AS HE WAS BEING CONSIDERED? But Donald Trump, Flynn's big buddy who whispered in his ear during naptime about Hillary doing child sex rings in basement dungeons of pizza joints, had no idea and was not told. Was it a secret they were keeping from Trump? REALLY? TRUMP DIDN'T KNOW? Pffffffffft bullshit, we call bullshit, many bullshits, sorry BRB because there are too many bullshits.

Also, somehow, the transition team knew, but they didn't know know, because they weren't given all the details by Flynn's lawyers, so shut up. O RLY?

Then came Friday afternoon's Sean Spicer press briefing, as eager reporters and politicos wondered to themselves, "WONDER HOW HE GON' FUCK IT UP THIS TIME." Did Spicer come out with his American flag pin upside down like he was sending out distress signals? Of course he did, but this post is about Michael Flynn, stop getting distracted!

Here's Spicer ignoring a question about why nobody told Trump that Flynn was a foreign agent, and saying a bunch of word salad about how transition lawyers gave him good advice, which is kind of like if you have a problem with your taxes and you get good advice, and ????????

And here is Spicer saying more word salad in response to a question from Fox News about how Flynn was a foreign agent. As Tommy Christopher points out, he made up his own answer to his own question again, which had nothing to do with the topic at hand:

And finally, can we be sure there are no other foreign agents in the Trump regime? Sean Spicer says everybody filled out their forms real good and none of them said "treasonous bastard," we guess, so NO WORRIES:

WOW. Asked if he has faith there are no more foreign agents in Trump admin, Spicer says "We trust" everyone filled out the forms correctly. pic.twitter.com/Kpk8TNVAgk

So uh ... suffice it to say Sean Spicer has no fucking idea what he's supposed to say at this point, just like nobody else in the White House knows what to say, because DONALD TRUMP NOMINATED A FUCKING FOREIGN AGENT TO BE HIS NATIONAL SECURITY ADVISER. Yr Wonkette couldn't defend it either, except we would never be in that situation, because we are goddamn patriots, unlike the people who make up the Trump regime.

Anyway, we told you they were lying, because they are liars who will literally lie about anything, if their mouths are open, they are lying, lie lie lie lie lie. Unless they just all "misspoke."

Wonkette is fully reader-supported, so be a reader and support us (with dollars)!