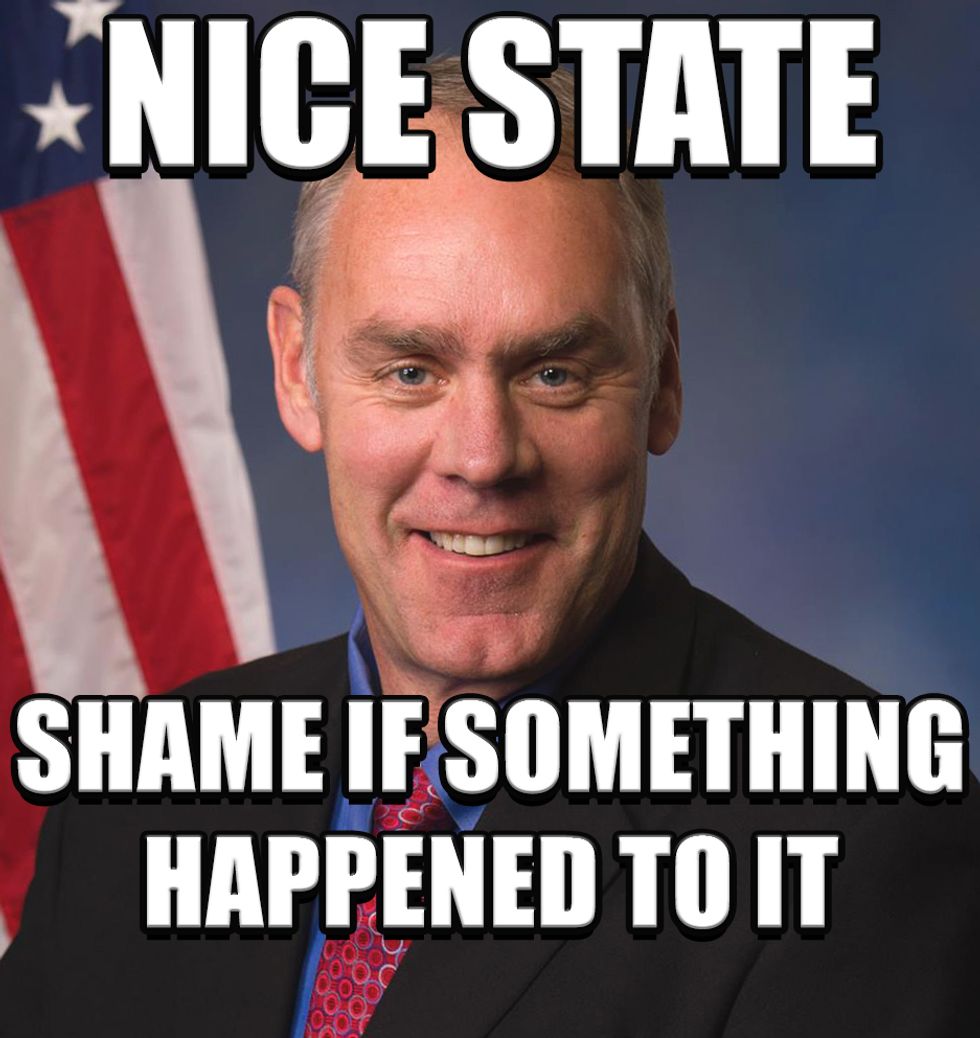 WOAH, it is Thirsty Thursday already, Wonketariat! Here's some of the things we may be talking about while day drinking.

Trump is talking with his people about a recess appointment of a new AG if Sessions decides to "You're Fired" himself. He's really slamming that panic button hard, isn't he?

The GOP is warning Trump not to "You're Fired" Jeff Sessions, and some analysts speculate he'll face an open revolt in Congress if he does.

Mitch McConnell's SkeletonCare LOOKS like it might fail, and that has many people worried the whole thing could get dragged back to the House for bicameral negotiations where Congress will be forced into cramped quarters with shitty coffee and fast food just like the rest of America.

Obama may be tactfully silent on TrumpCare/SkeletonCare at the moment, but that's because Bamz has a posse of healthcare professionals who are already hitting the pavement and the airwaves.

People on both sides of the aisle are fucking pissed at Trump's transgender military ban. Even Joni Ernst laced up her bread bags and trudged out to make a statement against the policy.

Trump's White House is trying to push tax reform but it's being nitpicked by Treasury officials and economics advisors who actually use mathematics.

President Bannon wants to raise the a top marginal tax rate from 39.6 to 44 percent, and that has the super-rich super mad.

Congress is trying to fast-track the repeal of Obama-era environmental protections with a sneaky provision about bypassing public comment periods and judicial reviews even if environmental groups object. Call your congress person, unless you like swimming in sludge.

People are being forced to defend Jeff Sessions now that Trump is publicly beating him on the DC playground.

Moderate Republicans in the Tuesday Group are now banding together to thwart Paul Ryan and his constant hand-jobs to the House Freedom crazies.

Reince Priebus and The Mooch are fighting like man-babies, and now the Mooch has threatened to turn Priebus in to the FBI for "leaking" public documents to the press. AND THEN THIS MORNING The Mooch called into CNN and said, "150 years ago people would have been hung for those types of leaks." Yep, this is the world we live in.

Alabama Republican Rep. Mo Brooks is using the audio from the shooting of Rep. Steve Scalise in a primary attack ad for Jeff Sessions's Senate seat against Luther Strange. There's no joke here, this is some fucked up repugnant shit.

As if worrying about getting shot wasn't bad enough, Chicago is now fighting lead in the water system by running some water fountains 24/7. Makes you wonder how many other cities have fucked up water lines, just like Flint and Detroit.

An NPO is suing the FCC for failing to comply with FOIA requests seeking communications records between the FCC, Ajit Pai, his staff, and telecom companies. You'd almost think Ajit Pai was trying to hide something.

The Senate and House made nice-nice on the Russian sanctions bill after including Iran and North Korea, as well as a provision to block Trump from releasing the pressure.

REXXON wants to kill off special envoys for a bunch of special interests that include food security, LGBT, cyber, Afghanistan, Pakistan, and Haiti, because he thinks there's just too many bureaucrats looking out for the disenfranchised in Not America.

Trump has nominated Kansas's god-awful governor Sam Brownback to head the Office of International Religious Freedom in the State Department, a move that's sure to make all the gay-hatin' eat-the-poo-poo people happy.

Somebody went rummaging through the garbage so they could find Ken Starr and make him write an an op-ed asking Trump top "cut it out."

Matt Drudge isn't really flashing his sirens for Trump, and that has many people waving red flags considering how much traffic he drives.

Eric Trump went on Fox & Friends to express his sadness over a lack of bootlicking and free rimjobs.

Trump spawn love using social media to shill fascist bullshit where the only filters are whether or not they should use lens flare or film grain. #NoFilter.

One of those dancing with dumbasses gameshows wants Spicey to make a fool out of himself on national television, and I WANT THIS TO HAPPEN.

Michelle Obama went to the Women's Foundation of Colorado's 30th anniversary to talk about all her hates, and give advice to people suffering racial prejudice from ignorant jerks.

And here's your late night wrap-up! Stephen Colbert realized that The Mooch was the one leaking FROM INSIDE the White House; Seth Meyers doesn't want to be friends with "Pickle"; The Daily Show took aim at Trump's trans-ban; Samantha Bee 'splain'd the GOP's magical tax bullshit called the Laffer Curve; and James Corden had a FABULOUS song and dance for the LGBT.

And here's your morning Nice Time! A baby gorilla! He's so silly!

We're busting our butts and drowning our livers over here, and we need your help! Give us money!