White House: Sarah Palin Might Be A Idiot, But Domestic Violence Is Serious Business 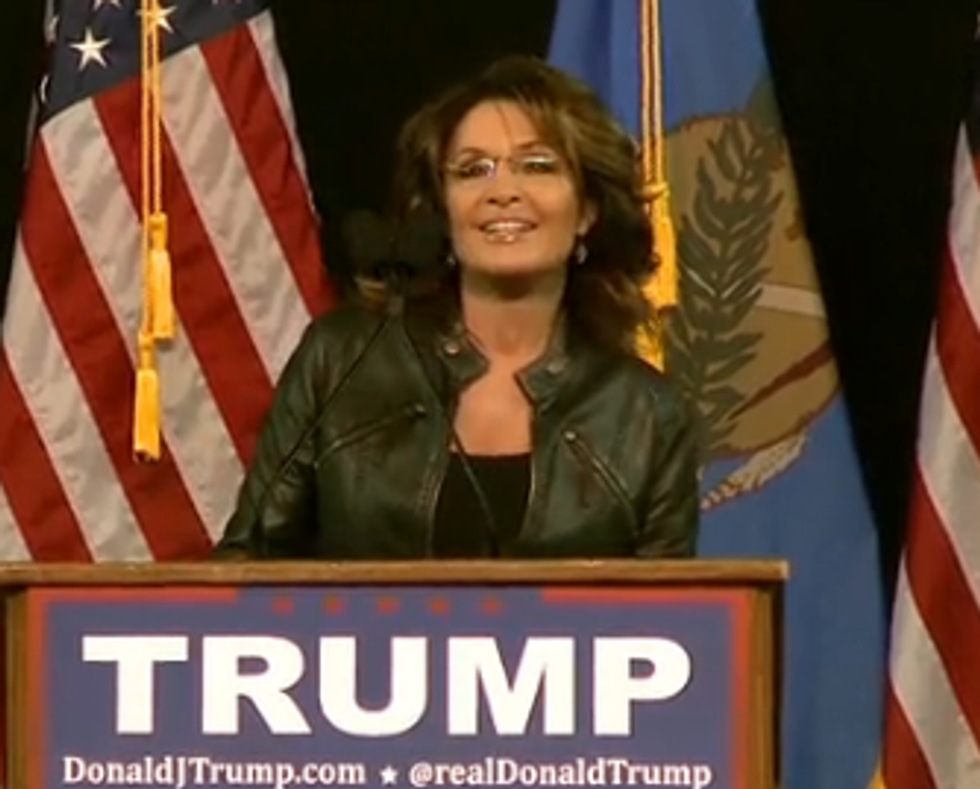 This is not a LOLing matter, Sarah.

[contextly_sidebar id="S6c4b6BtkV3lzKC2QttaTxOq1JwYL0Hk"]Wednesday afternoon, Sarah Palin explained that her son Track beated up his girlfriend because Barack Obama gave him PTSD. At the time, we said, "OMG WTF ARE YOU GODDAMNED KIDDING US, SARAH?" (Or something like that, with a lot more cusses.) Because, really, how craven, calculating and just generally gross is it to take Track's bad actions, which very well may be linked in some way to PTSD from when he served in Iraq, and use it as red meat to throw to slobbering, rage-faced Trump fans? Especially when it was George W. Effing Bush who sent Track Palin to Iraq, NOT OBAMA.

Gah, Obama administration, so mature, such a growned-up! Is Earnest saying Sarah Palin maybe shouldn't be fucking trivializing what her son did (allegedly!) in order to throw her special brand of folksy you betcha shade at the president? LOL nah, because everybody who is not a moron already knows Sarah was being a REAL dick when she said that. No need to White House-splain it to us.

Here's the part where Earnest basically says she is A Idiot:

Pressed on whether Palin was making a joke of a serious issue, Earnest declined to go after Palin directly.

“No, I’m just saying that the instinct that some people have when hearing her rhetoric is to make light of it,” he said.

“And sometimes those jokes come pretty easy. But in this case, the issues she’s talking about are quite serious and certainly issues that we take quite seriously here.”

Haha, we can read between the lines about "those jokes come pretty easy," to find the embedded #WhiteHouseZing. What he is saying is that when people hear the name Sarah Palin, they automatically assume she's being a dumb, spiteful, grifty, illiterate asshole, which, PALIN FACT, she is usually doing, at least 100 percent of the time.

And Earnest is right that domestic violence and drunkenly waving guns around and (maybe) PTSD are super real issues. Maybe Track Palin needs treatment, and maybe it's not a great idea for him to have access to a bunch of murder weapons. Just saying.

[contextly_sidebar id="ZS6zNv2TA605bU7xaC78fzkfyq2XQRCk"]Hey, idea, maybe Sarah Palin should STFU, get on a plane and go deal with her family crisis, instead of pallin' around with Donald Trump? For real, we hope she does, and we commend the White House for having the patience and compassion not to kick Sarah in the nuts and tell her to go fuck herself with a moose antler.