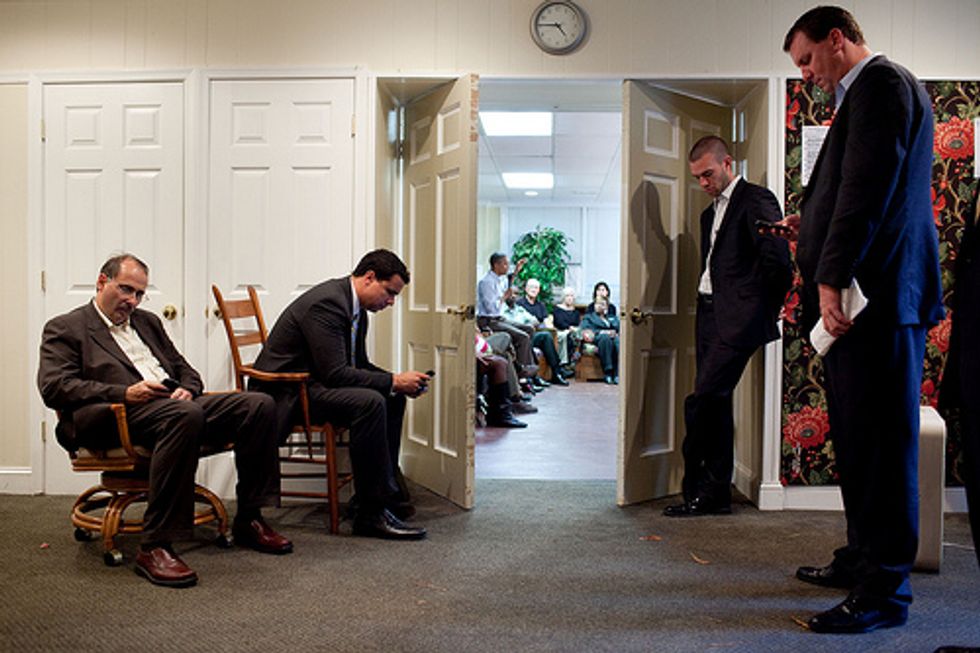 Democrats in Congress were too afraid even to try to pass an extension of the Bush tax cuts for the middle class before the election, because Republicans saying anything at all about Democrats and taxes is very scary! Of course, Republicans still used this anyway, because they have no problem turning anything and everything into "Those guys have raised and will in the future raise your taxes." But what about the White House? This whole tax cut thing will set the course for their next two years of working with Congress. Well, David Axelrodsat down for a long interview with the Huffington Post last night for no apparent reason, and he said they would probably give in to the Republicans on this. The White House tried to take back Axelrod's statement this morning, but that's like swishing an open flesh wound in the water next to an alligator and then kindly asking him to forget about it.

"We have to deal with the world as we find it," Axelrod said during an unusually candid and reflective 90-minute interview in his office, steps away from the Oval Office. "The world of what it takes to get this done."

"There are concerns," he added, that Congress will continue to kick the can down the road in the future by passing temporary extensions for the wealthy time and time again. "But I don't want to trade away security for the middle class in order to make that point."

Yeah, that's kind of hard to take back. And when they try to do just that, it makes it even worse. At least deciding to let Republicans completely grab control of the law-making process and all of the ground at the bargaining table is a concrete resolution, and one that could shift the blame of the sagging economy to the Republican Party. Constant waffling on whether to make this decision is not a concrete resolution. And Republicans will just get what they want, without having to pay any sort of price.

Oh, by the way, Democrats can do this whole tax bullshit too. Let the damn things expire. "The Republicans raised taxes. They were in charge of Congress when it was time to pass them. I was willing to sign it , but apparently they are secret Muslims who hate the middle class." There you go. 2012 won.

Oh, and it would reduce the deficit. Which may be a good idea at some point! [HuffPo/Plum Line]