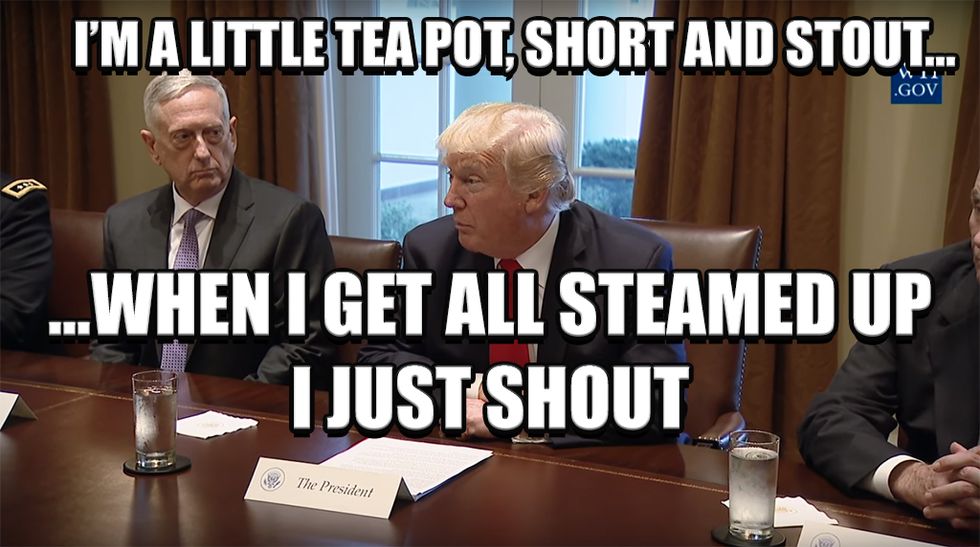 Hey, Wonketariat! Here's some of the things we may be talking about today.

Massive wildfires have engulfed portions of California, destroying Santa Rosa in the north and parts of Anaheim Hills in the south, killing at least 10 and destroying over 1,500 buildings, with more than 100 people reported missing. Santa Rosa wonkers, can you check in in the comments pls?

Earlier this morning, Trump tweeted some stupid crap about using a pen to sink fragile Obamacare provisions in states that are barely hanging on to what insurance markets they have left.

People inside the Republican party are deathly terrified that Trump's tirade against Bob Corker will kill the Trump Tax Cuts, so now they're leaning on Rand Paul like he's some sort of Libertarian Jesus for the super rich, and sending out Princess Ivanka to woo wingnut Republicans and conservative lobbying groups.

Yesterday we told you how Scott Pruitt's EPA is going to give you a big bowl of coal flakes, by stopping a bunch of wind tax credits that kill birds, and today we now know that they're going balls out by claiming oil and coal emissions aren't that bad for you.

Trump is losing his shit and could explode at any moment now that John Kelly has kicked all the people "soothing his foul moods" to the curb. Poor baby. Meanwhile, officials inside Trump's White House are quietly setting up "distractions" and "guardrails" to keep Trump from imploding and/or exploding. Oh, also?? A new story in Forbes shows just how butthurt Trump is over that story about REXXON calling him a "FUCKING MORON" where Trump actually says, "I think it's fake news, but if he did that, I guess we'll have to compare IQ tests. And I can tell you who is going to win."

Some GOP members are quietly grumbling in smoky cloak rooms and dimly lit bars that Trump is permanently fucking their party's potential to woo Latino voters in swing states like Florida.

Lindsey Graham went golfing with Trump and now they're bestest friends, getting tattoos of one another, and even shopping for apartments together. The most charitable interpretation is that it was Lindsey's shift at the day care because John Kelly needed a BREAK GODDAMMIT JUST FOR FIVE MINUTES A BREAK.

Some dumb bastard at The Daily Caller is trying to blame Obama officials for travel on fancy planes, like Trump's, except nobody bothered to use a fucking calculator and a calendar.

People on Trump's team are using the Mike Pence sportsball stunt as a fundraising ploy. God DAMN, you fuckers are bad at this.

Corporate-owned stooge, Tennessee Republican Rep. Marsha Blackburn has been told by Twitter to remove a video announcing her run for Senate because it references that bullshit James O'Keefe crap about Planned Parenthood selling baby body parts. At this time, the Tweet's still up, but we've archived the video.

The DCCC is going balls out with its organizing efforts in suburban swing districts in order to tip the House in their favor.

Senate Democrats are keeping their eye on the prize for 2018, hopeful that they can take the Senate, even if the road is long and hard.

The infamous "Tent City" gulag run by former Sheriff Joe Arpaio quietly closed this weekend, and you can thank the new Sheriff in town, Paul Penzone. It'll be torn down and sold for scrap, saving millions in taxpayer resources.

Trump's White House wants to investigate a professor at the University of Nevada Las Vegas for telling her class that "some of us won't be affected by this presidency, but others are going to die," because Trump's "rhetorical powers...encourage violence." I wonder what they'll find?

The chief medical officer of Michigan, Dr. Eden Wells, will be charged with involuntary manslaughter for her complacency during the Flint water crisis that was linked to an outbreak of Legionnaires' Disease that poisoned thousands and killed 12.

A magistrate in Charlottesville, Virginia, has issued a warrant for Deandre Harris, the black man who was brutally beaten by white supremacists and Nazis.

Neo-Nazi dicknoseRichard Spencer will talk to The University of Florida, and the university is not happy about having to spend $500,000 to secure the campus from the crazy asshole(s) it never invited.

How do people in Chicago get all of their guns? It's easy, we just go to Indiana, or Wisconsin, or one of the other states that protect gun fetishists.

Some Jesus freaks went to DC to bitch about how "feminists lied" to them about being women, and how only G-O-D gives them purpose as mothers and wives. Bless your hearts, dears.

Turkish Prime Minister Binali Yildirim says that his country doesn't need the cooperation of US officials to prosecute its citizens working in US diplomatic outposts because that's how dictatorships work.

The hacker conference, DEFCON, will release its findings from the teardown and break-in of different voting machines this past summer, and we can't wait.

Russian social media fuckery during the 2016 election was specifically engineered to sow racial and cultural dissent among particular communities, but we're sure Facebook will just deny that. Again.

Former President Bannon went on Hannity to throw a tantrum and have a pity party about his war against the GOP and then talked some shit about Sen. Bob Corker. You didn't miss much beyond Hannity's jelly neck jiggles.

ESPN has suspended Jemele Hill from teevee for pointing out that boycotts exist, should someone choose not to buy Dallas Cowboy swag. Crom forbid someone should call out the most valuable sports franchise in the world for its two-faced racist bullshit.

Marvel and Northrop Grumman were going to launch a comic book that was going to encourage little nerds to get into STEM fields until the older, unwashed basement dwellers started screeching about the military industrial complex at New York Comic Con. This is why we can't have nice things.

And here's your late night wrap-up! Stephen Colbert and Jon Stewart try to give Trump "equal time"; James Corden sounded off about Bob Corker popping off; Jimmy Kimmel explained why he grabbed Trump Jr. by the pussy (on Twitter); Seth Meyers ladysplained why Harvey Weinstein's "apology" is worthless bullshit; The Daily Show wants to change the symbolism behind guns and race with Neil Brennan.

And here's your morning Nice Time! It's a...pokeyboi nomming a corncob? OK!

We're supported ONLY by readers like you, so we need you to help us pay our bills!