White-Power Charleston Church Murderer Convicted, Wonder Where He Got 'Self-Radicalized'? 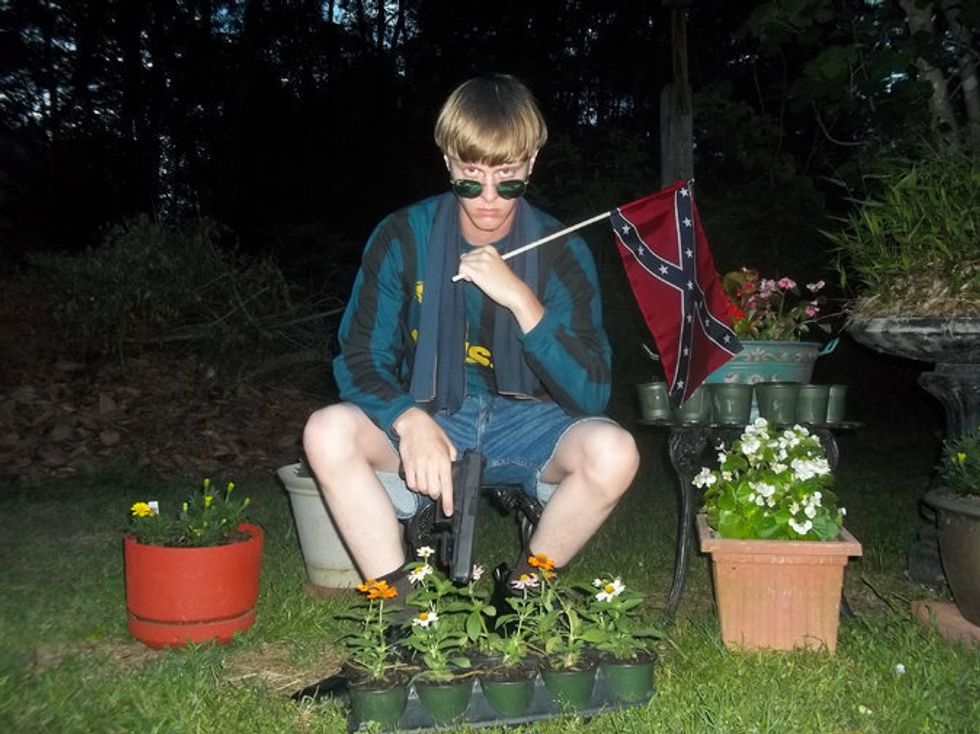 Not exactly a completely lone wolf

A federal jury only had to deliberate two hours Thursday before convicting Dylann Roof on 33 counts of federal hate crimes in his murders of nine people at the Emanuel African Methodist Episcopal Church in Charleston, South Carolina. In the sentencing phase of the trial, set to begin January 3, the jury will decide whether Roof will be sentenced to death or life in prison without parole. He also faces a separate state murder trial in January, which also could result in a death sentence. Even Roof's attorneys didn't contest that he'd committed the killings; their only goal is to help him avoid execution.

Roof has been described as "self-radicalized," or as the Washington Post puts it slightly more accurately, as a "ninth-grade dropout who learned to hate black people on the Internet," and since there's little we want to say about Roof himself (he's scum, but we don't think he should be executed because we don't think the state should be allowed to kill, any more than an idiot racist teen with a gun should be), we wanted to take a cue from Irish historian Liam Hogan, who's been using the occasion of Roof's trial to examine how exactly that ninth-grade dropout found a network of racism and hate to support and fuel his delusional hopes of starting a race war by gunning down nine people at a Bible study group.

As Yr Wonkette discussed last June, shortly after the murders, Roof said in his "manifesto" that he'd largely been educated in white supremacy by the Council of Conservative Citizens (CCC), the modern version of what used to be the “White Citizens Councils” of the ’50s and ’60s. Back in the bad old days, the Citizens Councils were the "respectable" supporters of segregation, presenting themselves as less radical than the KKK because they didn't burn crosses or have silly jargon with lots of K's in it, although the ideology was pretty much the same. They discovered long before David Duke that you could get away with no end of racism if you were wearing a nice suit instead of a robe and a hood. The ruse worked well enough that Mississippi Governor Haley Barbour could almost get away in 2010 with talking nostalgically about how the Citizens Councils were nice responsible folks who opposed the Klan (except darn it, liberals kept correcting him).

As Roof said in his "manifesto" and his interview with the FBI, it was the modern CCC that convinced him he "had to do it," since after all nobody was doing anything about "black-on-white crime.” All he wanted to do was start a little race war, because "it’s not too late to take the country back from blacks.”

Now, as Mr. Hogan found out earlier this week, the Council of Conservative Citizens' website has gone offline all of a sudden, which Hogan says is "no coincidence." But the cached version is quite damning enough:

We took our own look at the cached version of the now-scrubbed CCC homepage, and they were every bit as charming when they went offline in early December:

And speaking of Breitbart, the CCC even had a November article calling on white nationalists to "cut the bullshit about Steve Bannon," because -- and gosh, we liberals should be so relieved -- he's not nearly racist enough for the CCC's taste, although they do consider him a useful ally -- not quite "alt-right," but "alt-lite":

Those whimsical playful race-baiters of the 'alt-right' have made their own version of the already terrible 'We Didn't Start the Fire.' It has no beat and you can't dance to it.

So why even make any fuss about the CCC and its attempts to recruit young racists who don't go in for white sheets? For exactly the same reason as they were a concern when Dylann Roof went on his killing spree: the group's leader, Earl Holt, was an enthusiastic financial supporter of Republican candidates, and while the connection to the Charleston murders has cooled Republicans' enthusiasm for taking Holt's money, he's still out there helping where he can. Along with Jared Taylor, the junior Nazi who runs American Renaissance, Holt contributed to a white nationalist super-PAC that funded racist robocalls for Trump during the primaries featuring Taylor saying, "We don’t need Muslims ... We need smart, well-educated white people who will assimilate to our culture. Vote Trump.” We should note, however, that Taylor appears to be solely responsible for that awful "alt-right" version of "We Didn't Start the Fire" that surfaced in August.

Oh yes, and the CCC even helped fund the campaign of Ryan Zinke, the Montana congressjerk who Donald Trump just appointed to head the Department of the Interior. Imagine that! Here's hoping somebody thinks to bring that up at Zinke's confirmation hearings, eh?

In conclusion, Dylann Roof was clearly a very troubled young man, a lone wolf who was mentally unbalanced, and it would be very unfair to suggest that online racists had anything to do with encouraging him to go kill nine black people in their church. Shame on us for being so politically correct as to even suggest a connection. Also, nothing needs to be done about the easy availability of guns. If anything, you should probably buy more guns to protect yourself from crazies like Dylann Roof.