Who Are Oregon's Wildlife Sanctuary Occupiers And What Do They Want? 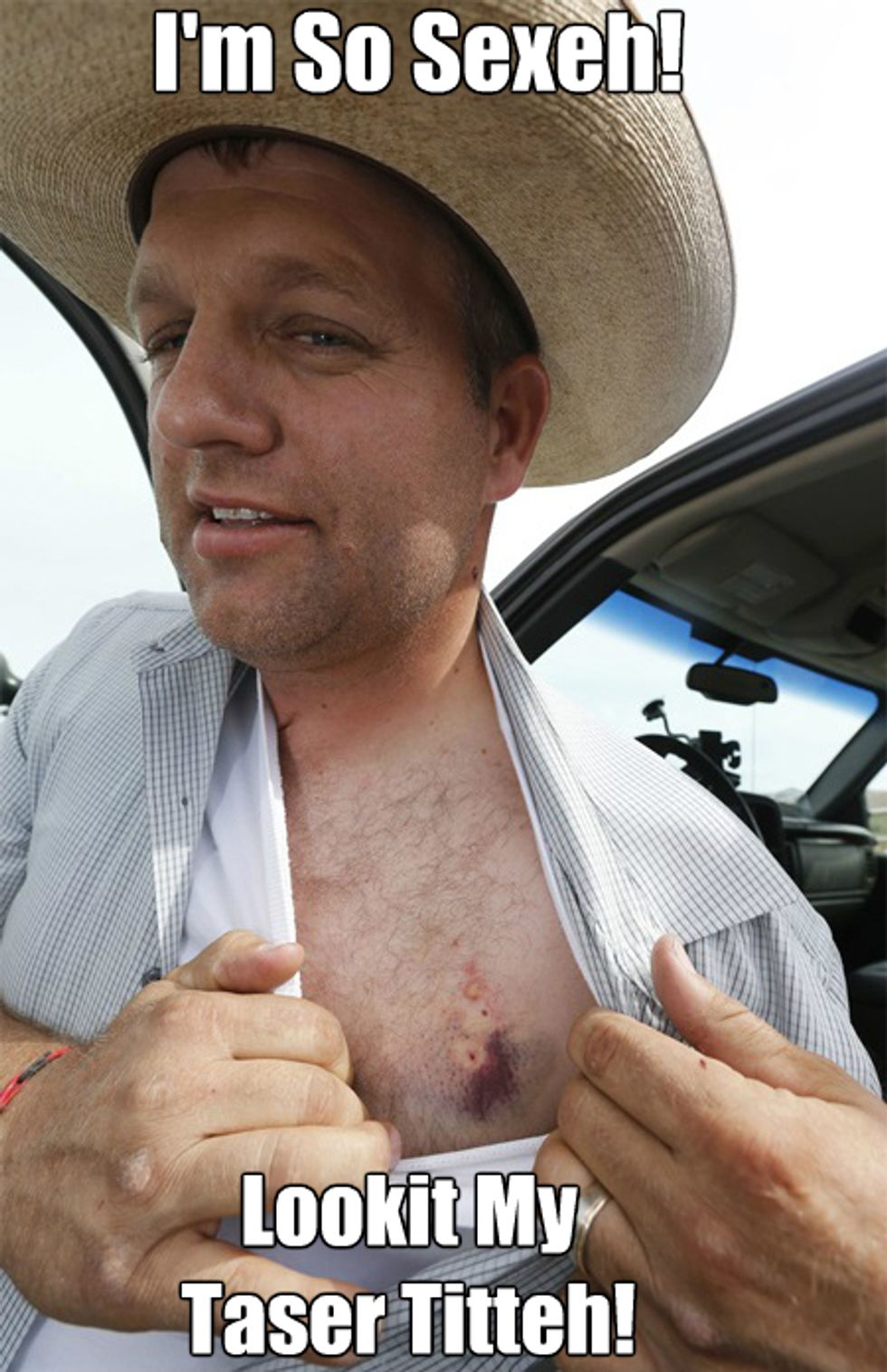 Why yes, we are mocking his abuse by a tyrannical federal government.

[contextly_sidebar id="1iFTbvx3wYJFS1Fb95dJYXhYR59PZKIM"]Now that the news is infected with Bundys again, let's take a few minutes to bring you up to speed on some basics of this latest Armed Militia Patriot Idiocy Outbreak, in which an unknown number of morons with guns and pocket copies of the Constitution have taken over the offices of a federal wildlife preserve, of all damned things. Who are these people? Why are they in Oregon? What do they hope to accomplish? And when will Nevada Assemblywoman Michele Fiore say something incredibly stupid about it on TV? (Answer to last one: What, you mean she hasn't yet?)

Where The Hell Is This, Again?

They're gonna have to steam clean the whole place now

The militia dudes broke into and occupied the headquarters of the Malheur National Wildlife Refuge, operated by the U.S. Fish and Wildlife Service, about 30 miles away from Burns, Oregon, in the high desert eastern part of the state. They claim to have a generator and food, and say they intend to keep the occupation going "for years," because now they have taken the wildlife refuge from the tyrannical hands of the Federal Government and returned it to We The People. Meaning, of course, They The Heavily Armed Morons. The building was closed for the weekend, and no federal employees were on the property. Since it's not really their property, it's more than one step up in seriousness from the old George Carlin bit: "A man has barricaded himself inside his house. However, he is not armed and no one is paying any attention to him."

What Great Principle Is At Stake Here?

The militia dudes say they've taken over the wildlife refuge to protest the conviction and prison sentence of local ranchers Dwight Hammond Jr., 73, and his son Steven Hammond, 46, who were convicted of arson on federal land and, after appealing, are set to report to prison Monday to serve a five-year sentence. The Hammonds' attorney, W. Alan Schroeder, wrote to Harney County Sheriff David Ward to clarify that the supposed beneficiaries of the takeover want nothing to do with the men playing Freedom Fighter at the refuge: "Neither Ammon Bundy nor anyone within his group/organization speak for the Hammond Family," Schroeder wrote. He also told the AP last week the Hammonds intend to report to prison Monday as ordered: "We gave our word that's what we would do, and we intend to act on it[.]" Not even with the great big militia standing by to keep them free.

What's This Crap Really About?

The Bundy boys -- Ammon, Ryan, and Mel -- appear to have glommed onto the Hammond case as an excuse to push their bizarre idea that the U.S. Constitution doesn't allow the Federal Government to own land, and the wildlife preserve really belongs to the ranchers and loggers of the area, because the land just does, okay? This argument is probably really hilarious to members of the Northern Paiute tribe, to whom the land originally belonged before they were forced to accept a token landholding of 760 acres near Burns.

No, really, there's no "principle" at work here. These are armed loons who think the federal government is illegitimate. They don't love the Constitution, they love the Articles of Confederation, although many may think those were too restrictive. As Charlie Pierce says:

This is an act of armed sedition against lawful authority. That is all that it is, and that is quite enough. This is not "an expression of anti-government sentiment." Flipping off the governor as he drives by is "an expression of anti-government sentiment." ... These are men with guns who have declared themselves outside the law. These are men with guns who have taken something that belongs to all of us. These are traitors and thieves who got away with this dangerous nonsense once, and have been encouraged to get away with it again, and they draw their inspiration not solely from the wilder fringes of our politics, either. [...]

This is another step down the road that leads to the broken shell of the Murrah Building in Oklahoma City.

So, yeah, that, pretty much.

Besides The Bundys, Who Else Is There?

As we noted Sunday, rightwing famewhore Jon Ritzheimer, the schmuck who keeps insisting he just wants to go back to being a private citizen every time he makes a public ass of himself, is there, possibly with some kind of suicide wish. Also camping out with the 1st Moran Brigade is Ritzheimer bestie Ryan Payne, a Montana militia dude who insists slavery never happened. Payne also served as a "spokesman" for some of the militias in the 2014 Bundy Ranch standoff, at least until that big tiff where the militias stopped talking to each other because their essence was impure or some goddamn thing. Anyhoo, as the Missoula Independent reported when Payne first became a Militia Celebrity in 2014, the boy just ain't right:

In other words, the usual mishmash of The Turner Diaries and Sovereign Citizen bullshit on a stick. It's on the internet, you can find all this for yourself, sheeple.

The 'Oath Keepers' Are Involved In This Somehow, Aren't They?

Weirdly enough, the nation's premier group of armed lunatics think this one's a little dodgy. Or at least, they'd love to join in the fun, but since the Hammonds have made it clear they don't want armed militia help, then by golly they'll just have to make do without. Oaf In Charge Stewart Rhodes writes:

We cannot force ourselves or our protection on people who do not want it. Dwight and Steven Hammond have made it clear, through their attorney, that they just want to turn themselves in and serve out their sentence. And that clear statement of their intent should be the end of the discussion on this. No patriot group or individual has the right or the authority to force an armed stand off on this family, or around them, against their wishes. You cannot help someone who does not want your help, and who are not willing and ready to take a hard stand themselves.

You can totally tell he'd love nothing more than a good armed standoff with the feds, but if the Hammonds are going to just go to prison like pussies, darned if the Oath Keepers feel they have reason to interfere. Instead, Rhodes vows to wait until "Obama and his fellow traveler Marxist buddies" finally "step on their dicks" and try to take everyone's guns away. Then it'll be time to start the shooting war against the feds. Pretty principled, for a crowd of anti-government insurrectionists.

What Does The Sole Legitimate Constitutional Officer In Harney County Think Of All This?

While the Bundy crew subscribes to the loony "Posse Comitatus" notion that the only legitimate law enforcement is the County Sheriff, that belief is not shared by Harney County Sheriff David Ward, who said Sunday the Bundy Bunch were outside troublemakers merely using the Hammond controversy as cover for a more nefarious plot. In a news release, Ward said:

[In] reality these men had alternative motives to attempt to over throw the county and federal government in hopes to spark a movement across the United States.

That has to be disappointing, for sure.

Are Any Wonkette Writers Trying To Get In Ammon Bundy's Undies?

So far, only Sara Benincasa:

Most people merely dream of being a tenth as fabulous

Update:(Added December 6) The @Ammon_Bundy account is a well-played troll. Not that it mattered much, since all the funny was on Sara's side anyway. She seems to be taking the news in stride:

What happens to a dream deferred?

It gets really cold in Oregon's high desert, the FBI keeps an eye on things, and eventually the loons run out of gasoline and food. Or maybe, just maybe, their brave defiance sparks a new revolution of freedom and liberty, and some more idiots with guns seize other empty federal buildings. Then a miracle happens, the Constitution is restored, and all the liberals and takers will be executed.