Who Caused That Amtrak Crash? Oh, Just The Gays 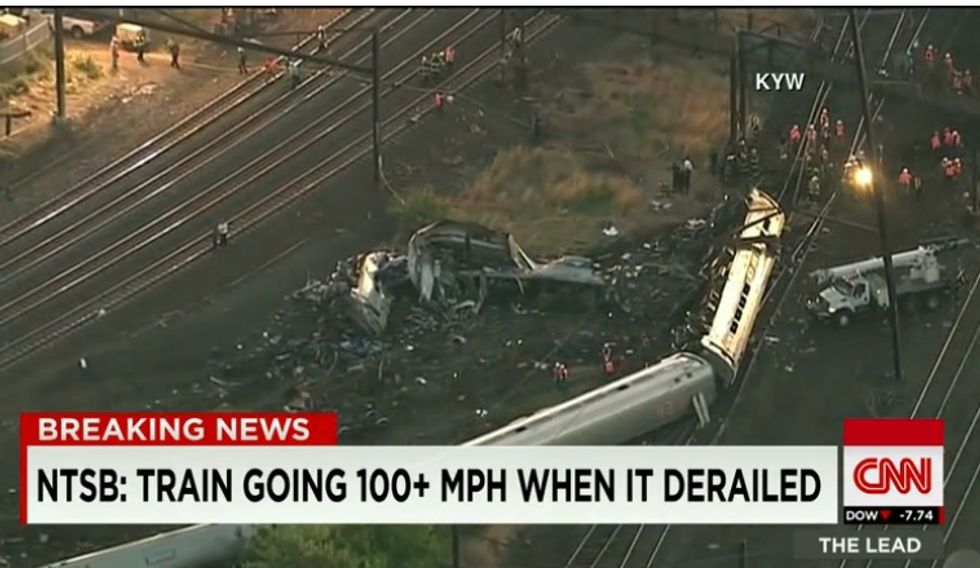 Here's a moment that's more than a little iconic of what's gone wrong with politics in your 2015 America: Within a few hours of the Amtrak crash in Philadelphia, House Republicans voted to cut Amtrak's budget by about 20 percent. While they were at it, they rejected a Democratic attempt to increase funds to put in place a safety system that almost certainly would have prevented the crash.

Just a few hours after the vote, Robert Sumwalt, the National Transportation Safety board member who's leading the investigation in Philadelphia, said that while the board is still investigating why the train was going over 100 miles per hour on a curve with a speed limit of 50 mph, he was quite certain that the accident could have been prevented if the train and track had been equipped with a safety system called Positive Train Control (PTC), telling reporters, “Based on what we know right now, we feel that had such a system been installed in this section of track, this accident would not have occurred.”

Not that House Republicans think funding for infrastructure could even remotely be related to the crash, or that it could have been prevented. During the House debate, New York Democratic Rep. Steve Israel argued for increased funding to get the system into place. "Last night we failed them," he said. "We failed to invest in their safety." This didn't sit well at all with Idaho congressreptile Mike Simpson, who countered that it was just terrible, HORRIBLE, for Israel to offend Americans at this tragic time by suggesting that seven people would still be alive if positive train control had been in place, because obviously that was just a cheap ploy to spend taxpayers' hard-earned money:

“You have no idea, no idea what caused the accident, and to use that as a means of supporting the last amendment… don’t use this tragedy in that way, it was beneath you.”

This is nothing new; we've gotten really good at letting our roads and bridges fall apart by the simple method of not paying to keep them standing.

And despite the NTSB's confirmation that PTC would have made it nearly impossible for the Amtrak train to reach the speeds it was going before it went into that curve, the rightwing narrative has already begun to solidify: We don't need no stinking infrastructure or safety systems, we just need to yell at the engineer who was driving the train too damn fast, and not look at boring questions like why our railroads and bridges and highways are falling apart. Given enough time, we're sure Fox News will find an overpass somewhere that bought crab legs with food stamps.

On Fox, Megyn Kelly was simply disgusted that anyone would politicize this terrible tragedy, since it was OBVIOUSLY the sole fault of the engineer driving the train, condemning the "predictable but no less despicable rush to turn this crash into a political talking point." Obviously, if the train was going too fast, then we don't need systems that would automatically slow trains down; instead, we need to yell at the engineer and probably cut funding to punish Amtrak for hiring bad people. Even though Fox correspondent Trace Gallagher noted that the curve where the train crashed has long been a safety concern, and that it lacked Positive Train Control, Kelly insisted that this was human error, and human error only, asking “Who failed them?… How exactly did the infrastructure fail?” We guess it's a bit like Republican views on contraception: you shouldn't fuck unless you're married and want babies, and therefore you shouldn't have access to anything that would make it possible to fuck safely. Same with trains: we don't need infrastructure that would keep people alive, we just need to insist that no one ever screws up, and why would we want to waste money one something that would mitigate such screw-ups?

On a parallel track, human pharmaceutical train Rush Limbaugh went into full conspiracy mode, spinning out a prediction that the Obama administration would coach the engineer to blame poor infrastructure for his own obvious irresponsibility:

So we've got to get out in front of this. Train was speeding, engineer not saying anything, somebody at the regime is going to get to him and fix it so that he will not admit speeding because this has got to be the infrastructure [...] Here we have a train derailment, and before anyone knows why or what's the cause, we immediately need more money. And why do we need more money? Because the Republicans have been stingy ... The Republicans don't care about people on trains. Do not laugh. That is the narrative.

We wonder if it's the narrative because it's true, just maybe. It's been seven years since PTC was mandated, and the railroads -- with support from Congress -- have constantly delayed its implementation. And on the day of a fatal train crash, House Republicans voted against funds to get that system in place. Seems like a pretty accurate narrative.

In other important Wingnut Notes, New Stupidest Man on the Internet Chuck C. Johnson has discovered that the Amtrak engineer, Brandon Bostian, is a "gay activist who previously worked at Target as a cashier," which pretty much proves he was incompetent or perhaps busy being gay when the train crashed. The American Patriarchy Association's Sandy Rios fretted that maybe the engineer lost control of the train because he was "going through some confusion that has to do with the very core of who they are," because all that Gay just makes people mixed up in the head.

One Great Mind on the right, Donald Trump, appeared at first not to have gotten the message that infrastructure had nothing to do with the deaths of seven people; his first reaction to the deadly crash was to brag about what a great job he'd do fixing up everything, because he is a guy who builds yooge classy things:

So far, apart from his excited announcement that he's the best Builder -- what about Bob? -- Trump hasn't yet gotten on board the Personal Responsibility Express and explained that everything is just fine and we don't need to fix anything, just make sure that no gay irresponsible people ever sit at the controls of a locomotive.

See, here's the thing: we don't know why the train was going over twice the speed it should have been on that section of track. We're perfectly willing to believe that Brian Bostian was irresponsible, distracted, impaired, being flamingly gay, or maybe even texting, like the engineer of the Metrolink train whose 2008 crash spurred Congress to mandate Positive Train Control in the first place. But if a Positive Train Control system had actually been in place -- and it does cost money to upgrade trains and tracks, it just DOES -- we would not be having a political argument about the Philadelphia Amtrak crash, because no matter how irresponsible the engineer might have been, there probably would not have been a Philadelphia Amtrak crash for us to be talking about. Infrastructure matters, and continuing to let it rot is not fiscal responsibility, it's increasingly becoming negligent homicide.

Rachel Maddow got good and pissed about the whole terrible mess last night, and it's worth watching every angry minute:

She notes that the United States of America used to have the best transportation technology in the world, but that we long ago gave up on trying to even keep it working, much less improve it, as other countries have where, "infrastructure investment" isn't automatically dismissed as wasteful theft from the overburdened taxpayer.

But let's talk about personal responsibility instead -- let's let the market take care of infrastructure, when it gets to it, blame the gay train engineer, and give the railroads a few more years to implement Positive Train Control, because it's hard, and regulations are bad. Besides, wasn't Obama supposed to have fixed all the infrastructure with the stimulus bill that never should have been passed? Our problems aren't technological, they're political, and frankly, we're not optimistic.