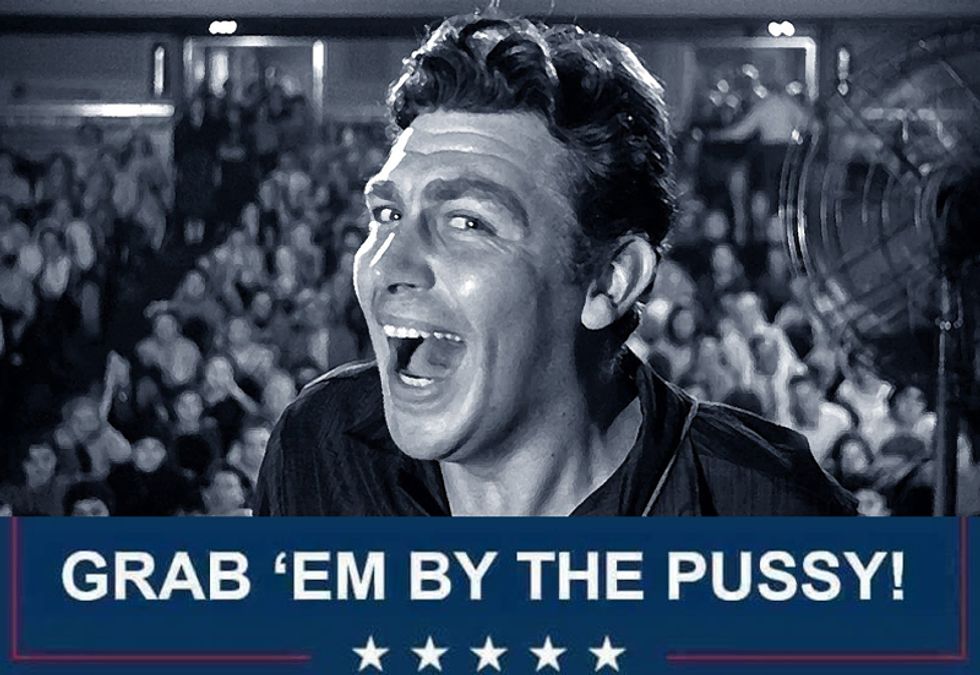 There's no improving on a perfect lede, so we're just going to steal Oliver Gettell's from Entertainment Weekly this one time:

This Friday, viewers across the country will have the opportunity to flip on their televisions to watch a power-hungry, media-savvy celebrity rise to megalomaniacal heights. We’re referring of course to Elia Kazan’s 1957 film A Face in the Crowd, which TCM will air in the hours after President-elect Donald Trump’s inauguration.

Just in case you haven't seen it (and if not, what is wrong with you?), here are a few spoilers: A Face in the Crowd is Elia Kazan's mass-media parable about a humble man of the people, Larry "Lonesome" Rhodes -- Andy Griffith in his most un-Mayberryish performance -- a grifty drifter whose skill with a guitar and a populist message turns him into a radio and television phenom, a reg'lar fellow who gets a taste of influence and sets his sights on pursuing money and power for their own sake. As he becomes richer and more influential, it becomes clearer he's a hypocrite who's only in the populist demagogue game for his own enrichment, the good of the public be damned. In what feels in the Age of Trump like a wonderfully naïve climax, Rhodes is undone when an open microphone catches him ranting about his utter contempt for the ordinary folks, which is where the movie proves itself an old-fashioned, simplistic fiction.

For all the wise commentaries saying A Face in the Crowd eerily predicted the rise of Trump, the Hollywood version is way too optimistic about what happens when we find out the emperor has no clothes. Any modern remake would have to feature Kellyanne Conway and Rudy Giuliani taking to Fox News to inform the lamestream media that what sounded like contempt was actually a realistic assessment of Ol' Lonesome Rhodes's enemies, and what you thought you heard him saying wasn't at all what he was really saying. Sean O'Neal at the AV Club has it exactly right: A Face in the Crowd sure looked like a cynical, media-savvy picture in 1957, but it's not nearly cynical enough to encompass the Trump Phenomenon. With Trump, there's no comeuppance. The cynical, contemptuous asshole wins everything, the crowds chant his name even more loudly, and members of the Senate are really excited about all the geniuses from Goldman Sachs he's bringing in to drain the swamp. Darkly prophetic? Nahh. It might as well be a Frank Capra flick with Jimmy Stewart. Watch it anyway -- it'll be way more satisfying than reality.

Military Parades? We Did Nazi That Coming!

Maybe some bread and circuses, too.

Speaking of reality, we learn today that Team Trump plans to privatize the Corporation for Public Broadcasting -- a move the CPB has been anticipating since the Reagan years, but get ready for more "sponsorship announcements -- and eliminate the National Endowment for the Arts and National Endowment for the Humanities entirely. Stop bitching. You want art and culture, you can pay for it. Or go watch some military parades.

Now, we should be very careful to point out one last coup in TCM's brilliant counter-programming for Inaugural Day. The network has exactly the right amount of cynicism, with a bit of plausible deniability Team Trump merely dreams of: It would be absolutely wrong to see the scheduling as anything but entirely coincidental, said a spokesperson for the network. You see, they're running A Face in the Crowd Friday to celebrate the birthday of Griffith's co-star, Patricia Neal, and by golly, they're sticking to that. Oh, and during the inauguration itself? That's The King and the Chorus Girl.