Who Knew Spiders Were Into Bondage? Your Saturday Nerdout 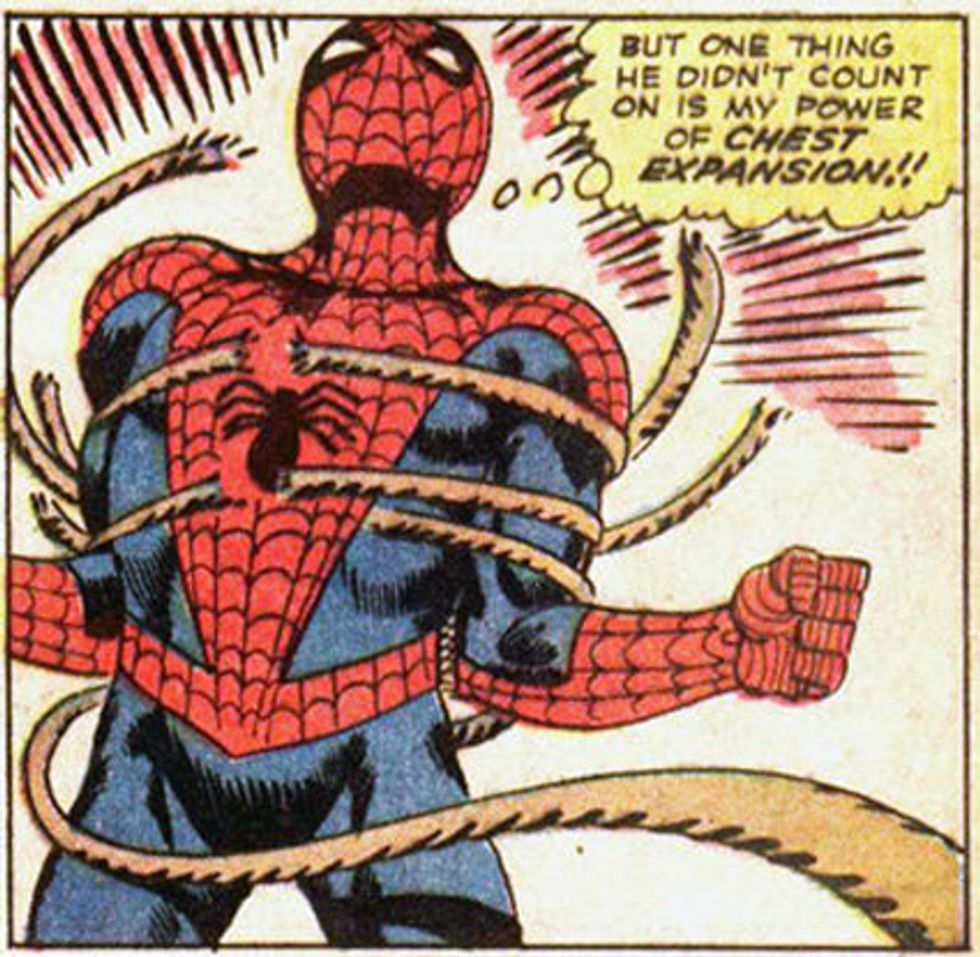 He hasn't even achieved his ultimate form

If it's weekend, it's time for nerding, so let's get caught up on our geekery. Or at least partly caught up. There is always more nerdy stuff out there!

Thanks to Zippy the Pinhead creator Bill Griffith for calling attention to this timely trip down memory lane: A 1989 take on Donald Trump, when he was every bit as loveable as he is today, by comics legend Robert Crumb. Go looka the whole thing!

Dr Suess Books Now Available In Yiddish, What's Not To Like?

Over at BoingBoing, Cory Doctorow lets us know that several Dr Seuss books have been translated into Yiddish by Sholem Berger and published by, logically enough, Yiddish House. Doctorow is a big fan of Eyn Fish Tsvey Fish Royter Fish Bloyer Fish:

Dr Seuss works improbably well in Yiddish. Yiddish's strength is its onomatopoeic expressiveness; and it contains a lot of Germanic words that are cognates for their English equivalents (such as "bloyer," which means "blue;" and "fish," which means "fish!"), but they're pitch-bent enough to make them sound a little off-kilter, which makes them perfect for a Seussian rhyme.

Berger's translation is funny and tight, his rhymes are as sweet as Seuss's originals. The text is written in both Hebrew script and Latin-alphabet transliterations (which is good, since I read Hebrew at the rate of about three words per hour).

Bonus points to anyone who sends a copy to Scott Walker for Hanukkah, with a card wishing him "Molotov!"

God Help Us Another Indiana Jones Movie Why, God Why?

We loved the first Indiana Jones movie and put up with the second two, and then the series should have flown off into the sunset, but nooooooo, they had to make Indiana Jones and the Kingdom of the Crystal Skull and we were all sad. At least the thing was so bad that the franchise finally had to end, we thought, but no, Stephen Spielberg and Harrison For are up for yet another Bataan death march through recycled tropes from old serials, and we will be forced to see it, probably, because that it how the world works for nerds. It's our lot in life. We're made to suffer. And who knows, maybe it won't be a joyless slog through ideas and characters that were once a lot of fun but became routine? Who are we kidding, it will be a joyless slog, unless JJ Abrams takes over and remakes the first movie, only a little different.

Just end this foolishness now, Spielberg, you have enough money. No, we don't want an E.T. sequel either. Or Oskar Schindler's Rescue Babies. Stop it.

On The Other Hand, A Stop-Motion Biography Of Michael Jackson's Chimp Sounds Arty

Not everything has to be a sequel or part of a franchise. For instance how about Dan Harmon (you know him as the creator of Community and co-creator of Rick and Morty, but to me he'll always be the co-writer of Scud: The Disposable Assassin), who has signed on to produce Bubbles, a stop-motion animated film about Michael Jackson, as told from the perspective of his pet chimp. The script won a "Black List" prize for unproduced screenplays last year, and the whole thing sounds like a hoot. Or a pant-hoot:

Bubbles tells the story of Michael Jackson’s life and history from the perspective of the pet Chimp which got a close-up view after being adopted by Jackson from an Austin, Texas research facility and took up residence at the Neverland Ranch in 1983. He became Jackson’s constant companion until he became overaggressive and was moved to a monkey sanctuary in Florida. The script has been considered a very inventive way to tell an unauthorized story of Jackson without needing permission.

Ahem. Primate or ape, please. Chimps are not monkeys.

2084: We Have Always Been At War With Donuts

Here is a fun little trifle that puts the "Oh well" in Orwell: Taz Goldstein’s 2084, in which we learn that dystopian brainwashing can be defeated by sheer dimwittedness. It's Idiocracy defeating GlaDOS, maybe. If you want a vision of the future, imagine a donut being stuffed into a human face -- forever.

Boy Bands Fight Zombies. Sure, Why Not?

From the people who brought us Sharknado! comes this trailer for Dead7, which promises to be deliciously horrible, or at least funny-awful enough to keep on your Tivo box for three weeks before you need room for the new season (or second half of the first season) of Fear The Walking Dead. Just look at this cast of people we never knew when they were in boy bands, now playing zombie-fighting cowboys in a SyFy original movie:

Dead7 stars: Nick Carter, A. J. McLean, and Howie Dorough from the Backstreet Boys; Jeff Timmons from 98 Degrees; Joey Fatone and Chris Kirpatrick from *NSync; and Jacob Underwood, Trevor Penick, Dan Miller, and Erik-Michael Estrasa from O-Town, which I’ve never heard of before but assume is an authentic ‘90s boy band and not made up. Fascinatingly, the script for Dead7 was written by Nick Carter himself.

Sadly, no Hanson brothers, so they will not be mmmm-bopping any Zombie Heads. This will probably be more fun than a new creaky Indiana Jones story, which might actually benefit from a tornado full of sharks.