Who Wants To Repeal The Second Amendment? Wonkette Raises Both Hands! 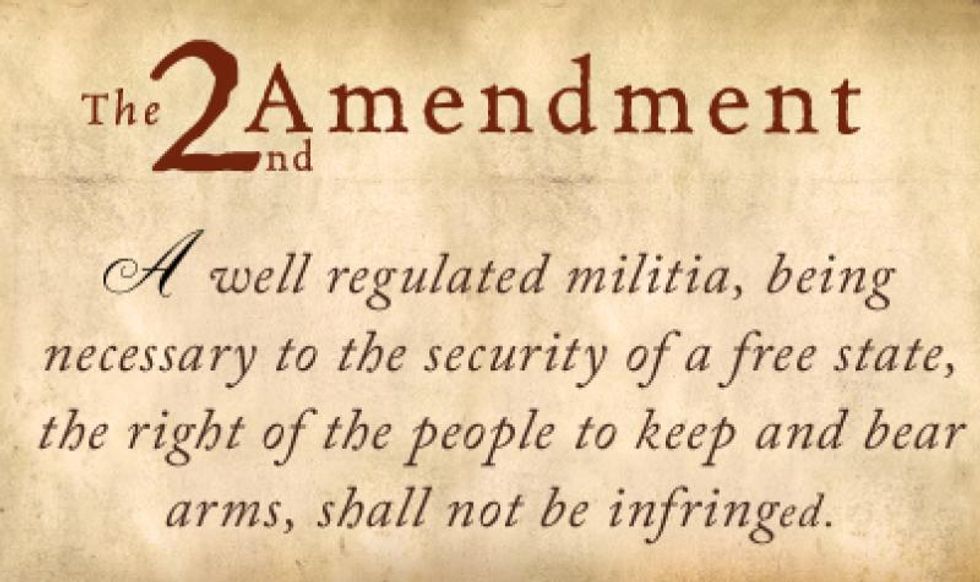 Stevens, notably, was one of four justices on the dissenting side in District of Columbia v. Heller -- the Supreme Court case that solidified the right to bear arms as an individual right. Prior to that decision, the government had more legal leeway to enact gun control legislation -- and Stevens argues that the only way to allow that again (and that we must) is to overturn Heller by repealing the Second Amendment.

This, of course, is one of the biggest fears of the NRA crowd -- and they have so very many fears -- so it takes considerable chutzpah for Stevens to come right out with it. Usually those of us who want gun control hedge things in "No, don't worry, we're not 'coming for your guns', we're not going to repeal the Second Amendment, we'd just like a small amount of gun control so we don't have mass shootings three times a week!"

But he's not wrong.

A well regulated militia being necessary to the security of a free State, the right of the People to keep and bear arms shall not be infringed.

That is a sentence that is far too open to interpretation.

If you ask the gun humpers, the Second Amendment was created so that the people would be able to overthrow the government "in case of tyranny" and means that every American should be able to have whatever kind of gun or weapon they want, with no regulation whatsoever. This, of course, is why it is perfectly legal and within one's constitutional rights to assassinate the president, why George Washington was so chill about the Whiskey Rebellion, and why ... the Civil War never happened? Whatever. SHALL NOT BE INFRINGED!

If you ask me, or Justice Stevens, we're going to tell you that the Second Amendment existed because the militia at that time was supposed to exist as an alternative to a standing army. Here I am explaining it, and here is Justice Stevens:

Concern that a national standing army might pose a threat to the security of the separate states led to the adoption of that amendment, which provides that “a well regulated militia, being necessary to the security of a free state, the right of the people to keep and bear arms, shall not be infringed.” Today that concern is a relic of the 18th century.

It is! Because we have a standing army. And one would think that if the right to overthrow the government "in case of tyranny" were such a cherished right, that it would be in the Second Amendment rather than all that stuff about a "well regulated militia."

If we are going to base our laws on a sentence, the very meaning of that sentence should be slightly less open to interpretation than Ophelia's flower speech or the tree from A Separate Peace. It should be clear. It should not be a Rorschach test for one's political leanings. Its meaning and intent should be absolutely clear to anyone who reads them.

These interpretations largely rest on what people in various political factions like to imagine was the "will" of a bunch of white slave-owning dudes from the 1700s as if they are Biblical prophets who could never be wrong about anything. They were just people who had as much chance of being wrong about things as anyone here, in the future, does. They were not infallible or perfectly righteous. They were cool with slavery being legal and women not being allowed to vote. They made some mistakes, which we have later corrected on account of the fact that we live in a different society than they did in the 1700s and that shit stopped working for us.

The "founders" had no way of knowing that AR-15s would exist and that our nation would be plagued by mass shooters left and right. They had no way of knowing that, eventually, we would have a standing army. They had no way of looking around and seeing other countries with gun control not having the problems we have. Maybe they would have looked around and said, "Yeah, I definitely think we should keep letting people have all the guns with zero regulations!" but we can't know that, because we, like them, are not psychic. Probably if they were here now they'd be too busy staring wide-eyed at microwave ovens and women in pants to even find something to say about gun control. We cannot know and it shouldn't matter anyway. Because we need to do what is right for us, as a people, now. Not what was right for people long before we were ever born.

The gun-humpers should actually want a repeal. This will allow them to put forth a Second Amendment with less room for interpretation -- perhaps cutting out the first clause entirely, and putting in some language about how it is totally legal and constitutional to violently overthrow the government. Then, "the people" can decide if they want that or if they would like gun control. Maybe their argument will win! Maybe "the people" will decide that is what they want. But also, maybe "the people" are really sick of this shit and would like some gun control now, please. It is worth hashing out.