Who Was Roy Cohn And Why Hath He Forsaken Donald Trump? Apart From Being Dead And All. 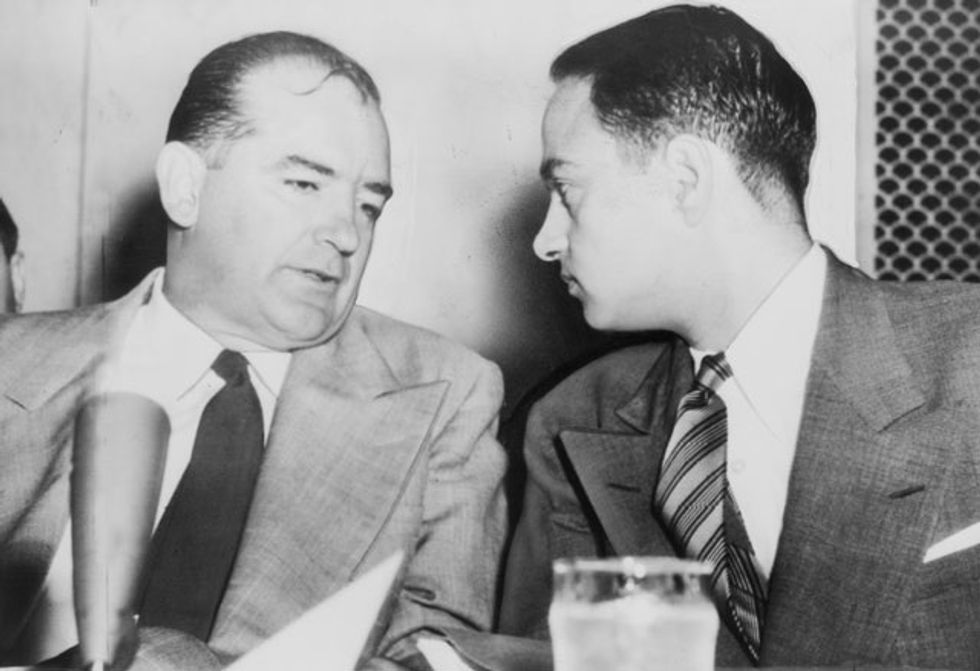 He was not a nice man.

Who was Roy Cohn? Where do we find the little childhood sled that would explain the man who was a fervent Red-baiter and smarter, possibly more evil sidekick to Senator Joe McCarthy, who later mentored Donald Trump in the art of chicanery and eventually died of AIDS in 1986, although Cohn, semi-closeted to the very end, insisted he had "cancer"? Who, you ask, was this Roy Cohn whose hellfire-blistered soul Donald Trump reportedly invoked? Here's a hint, via Nicholas Von Hoffman's brilliant 1988 piece in the briefly resuscitated Life Magazine, "The Snarling Death of Roy M. Cohn":

During the Army-McCarthy hearings of 1954, Cohn was testifying on the stand and he used the moment to pay tribute to Tailgunner Joe [McCarthy]. Afterward we were standing outside the Senate Caucus Room when we were approached by a little old lady. And she really was just that. This tiny little woman with white hair, wearing tennis shoes, with tears coming from her eyes. "Oh, Mr. Cohn, "she said, "I just couldn't believe your wonderful tribute to the senator. It meant so much to me." Cohn turned to me -- although she was standing right there -- with that cold look he had. "I almost believed it myself," he said. She looked like she had been hit with a whip, and I said to him: "You dirty SOB." -- historian William Manchester.

While Cohn is most often remembered as McCarthy's devoted right-hand slimebag, eager to help with smearing anyone who might conceivably be targeted as a Red, he got that position thanks to his role as an assistant US attorney in Manhattan, where he helped convict several accused Soviet operatives. He then played a leading role in the 1951 espionage prosecution of Julius and Ethel Rosenberg, who were convicted and sent to the electric chair.

One of the key witnesses, Ethel Rosenberg's brother David Greenglass, said in a 2003 appearance on 60 Minutes that he'd lied in his testimony against his sister, after being pressured by Cohn to say that he'd seen her type up notes on atomic bomb design that were given to the Soviets, when in fact he didn't actually recall any such thing. Greenglass said he didn't realize at the time that the false testimony about his sister was key to the claim that she was directly involved in the plot. Good lawyerin', Roy!

For McCarthy, Cohn was an all-around legal advisor, "investigator," and lickspittle, looking for communists everywhere and doing everything possible to keep his name in the papers -- like any good lawyer in the field of national security, he cultivated relationships with gossip columnists so everyone would know who Roy Cohn was.

By the '70s, Cohn had moved into private practice and become full-time New York tabloid fodder, so it only makes sense he'd pal around with Donald Trump. When Trump was investigated by the Justice Department for refusing to rent to black tenants, Cohn's legal advice was to "tell them to go to hell." Trump hired him to file a $100 million countersuit that was rapidly dismissed, but performed the important service of linking Cohn with Trump. Cohn also wrote the prenuptial contract for Trump's marriage to Ivana, which awarded her a generous $20,000 a year after the divorce, and no, we didn't misplace a zero.

In The Art of the Deal, Trump had Tony Schwartz write, as "Donald Trump,"

I don’t kid myself about Roy. He was no Boy Scout. He once told me that he’d spent more than two-thirds of his adult life under indictment on one charge or another. That amazed me[.]

Cohn's super-patriot persona wasn't entirely an act, or at least it was an act he believed in with as much sincerity as he could simulate. Von Hoffman -- really, read the whole wonderful painful essay! -- said that Cohn had to have been delighted by the "patriotic kitsch" of the Reagan '80s, noting that

At his parties he'd haul people to their feet to sing "God Bless America," evidently his favorite song, and though he was a lifelong operagoer, Roy's idea of a good time was to sing patriotic ditties at a piano bar in Provincetown, on Cape Cod. A friend recalled going home early one summer evening, and, on inquiring the next morning about the rest of the night, being told, "We all stood around the piano. Roy sang three choruses of 'God Bless America,' got a hard-on and went home to bed."

You can see what Trump and Cohn saw in each other. When Trump was running for president, several outlets -- like the Guardian, whose piece we're using here -- ran big stories about how Cohn had tutored Trump in the art of being a publicity-addicted liar. But the important thing to remember is that Cohn didn't create Trump -- he just passed on some secrets of the compulsive liar trade. There's little doubt that Trump's shamelessness has a lot of Cohn in it, but you can also tell that Trump is nowhere near as bright as Cohn -- he's got the bluster part down, but there's no real cunning behind it. Maybe Tony Kushner, who turned Cohn into a character in Angels in America, could do another play -- Trump's only worth a one-act -- where Cohn's ghost lays into Trump for making such a godawful hash of things.