Who Will Be California's Next Barbara Boxer? (Hint: It Is Probably Scott Brown) 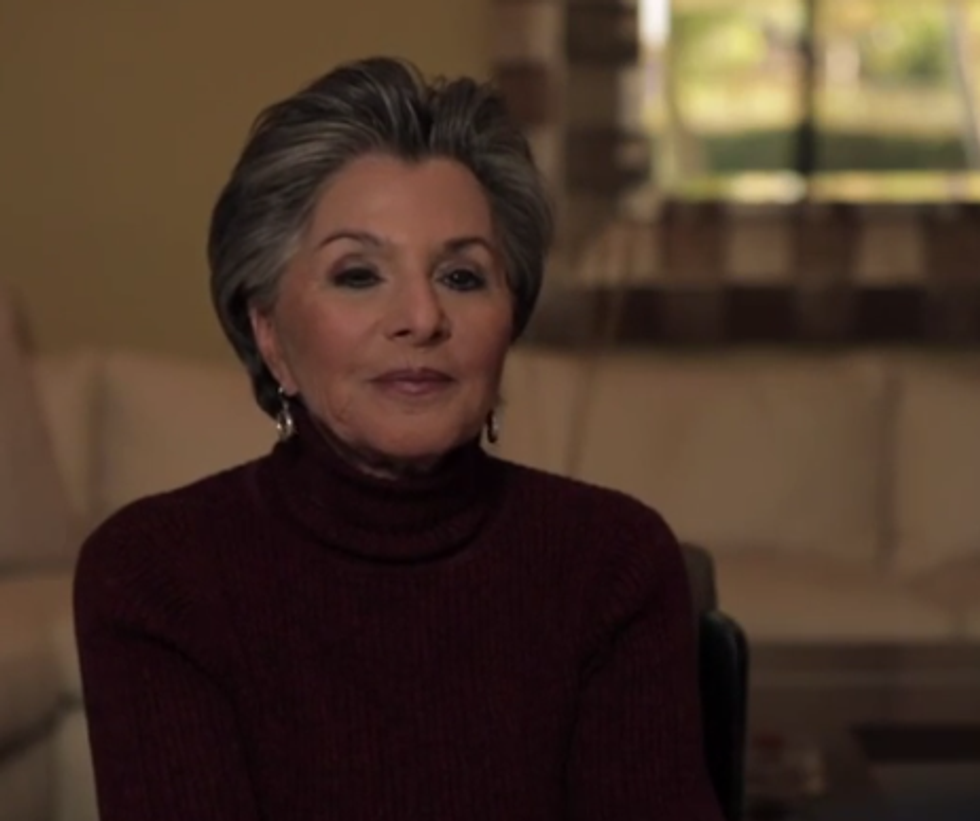 Well, it had to happen sometime, and apparently that "sometime" is 2016, because Barbara Boxer, one of the best liberals to ever lib up the Senate chamber with her San Francisco valyews, has announced to her grandson on video that she will not be seeking re-election in 2016, citing her desire to spend more time with her California. Is she RETIRING, though? Golly gee no, because there are still many, many things to be done. We are not certain whether she intended to release this announcement, or whether her grandson set this video to "public" on accident, but it's out there now, can't go back! Let's watch it. I'll live-blog, you laugh, got it? Me type words, you react in jolly manner. Let's go:

0:00 -- Senator Boxer and her grandson Zach are sitting, calmly, by the fire and the piano, in a completely unstaged way. Zach laughs as she starts to talk, because he knows that when his gram-gram sits him down like this, a big political announcement is coming!

0:27 -- "Grandma, have you made a decision about the 2016 Senate race?" She says yes, she has, but she is not going to tell it to you until after the minute mark, Zach, so keep your seat!

0:33 -- Zach asks if part of her decision has anything to do with the fact that the Senate is all fighty and obnoxious. She's like "nah, man, it's cool."

0:55 -- Zach asks if she's just too much of an Old to stay in the Senate and grandma is like, "I am in fact younger than most 40-year-olds, so nuh uh, but I knew you were going to ask that!" Then she gets him in a headlock and gives him a big noogie, like they always do.

1:20 -- "Are you RETIRING, grandma?" "Never!," says she. "But, you are right, I'm cold ghosting that joint in 2016!" She also says she wants to help our next Democratic president make history, and she's being vague about it, but Zach is pretty sure she's talking about his Auntie Hillary.

2:00 -- Zach asks her what she's proudest of, but how could she pick just one thing out of her gazillion accomplishments as her "favorite"? God, Zach.

2:25 -- RHYME TIME! Boxer freestyles a thing about her life in politics, which is kinda nice, we guess? Something about "although I won’t be working from my Senate SPACE and I won’t be running in that next tough RACE, as long as there are issues and challenges and STRIFE, I will never retire because this is the meaning of my LIFE.” Because those are rhymes, you see, and Senator Boxer is Good At Them.

To be serious, for a second (kind of), Boxer did some pretty awesome things during her Senate career. She's leaving the Senate, yep, she's bout-ta GHOST, here's a couple things she did that we like the MOST (take that, Boxer):

1. The time she led a group up the Capitol steps to demand that the Senate investigate the sexual harassment allegations made by Anita Hill against the skeevy, perpetually silent Clarence Thomas.

[D]uring the height of the war in Iraq, she challenged Secretary of State Condoleezza Rice's integrity by telling her that she believed her "loyalty to the mission you were given, to sell this war, overwhelmed your respect for the truth."

3. The time she fought and won (in 1993!) against the late Jesse Helms to get a "damn lesbian" confirmed as one of President Clinton's nominees:

One of the most significant moments of that support [for the LGBT community] was when Boxer took charge of getting San Francisco Supervisor Roberta Achtenberg— co-founder of the National Center for Lesbian Rights—confirmed in 1993 as President Bill Clinton’s nominee to be assistant secretary for fair housing and equal opportunity at the Department of Housing and Urban Development (HUD).

As I recalled for a story on Achtenberg in 2011, during her 1992 senate campaign, Boxer, who is 4-foot-11 inches tall, joked about standing up to the 6-foot tall hyper-antigay late North Carolina Republican Sen. Jesse Helms. In 1993, when asked by The Washington Times why he wouldn’t vote for Achtenberg, Helms snapped, “Because she’s a damn lesbian.” Later Helms added that she was “a militant, activist, mean lesbian.”

Boxer was almost beside herself: “It’s not about qualifications, it’s about a private life style,” Boxer said. “I say America is better than that.”

“Call it gay-bashing if you want to. I don’t call it that. I call it standing up for America’s traditional family values,” an emotional Helms said on the Senate floor. “We are crossing the threshold into the first time in the history of America that a homosexual or a lesbian has been nominated by a president of the United States to a top job in the U.S. government.”

And then there was a 58-31 vote, Achtenberg was confirmed, Boxer and the forces of goodness and damn lesbians won, and Jesse Helms got another embarrassing footnote tacked onto the epistle of shame that is his biography.

So godspeed and good luck from the Wonket, Senator Boxer. You will surely be missed.

We have been trying to figure out replacements in the chatcave, and here is what we have come up with so far:

1. Carly Fiorina. Yes we know she thinks she's running for president ha ha ha, but considering the fact that she was able to handily run Hewlett-Packard into the ground with both hands tied behind her back, I think she could be preznit of America and be the Carly of Fornia at the same time. Clearly she's mastered the art of "leaning in," right? Plus, she might do better in a race against Barbara Boxer that Barbara Boxer doesn't happen to be IN at that time. Give it a shot, Carleton!

2. Orly Taitz! Yeah, we know she's busy, what with sending be-glittered fanmail to George Clooney's human rights lawyer wife, trying to get her to do some real work and help Orly out on her quest to remove Barack Obama from office (something she will declare victory on in January of 2017, probably). But come on, Orly is a dentist AND a lawyer AND a real estate agent AND an investigator of fake-Indonesian-Kenyan-Homosexican presidents, so she's got time. She's more leany-inny than Carly!

3. The Once And Future Mayor of Colorado Springs, Justine Herring, who may be in jail very soon? Just tell California to set up an appointment with the prison whenever it needs something.

4. Neither Sarah Palin nor Michele Bachmann are busy at all right now, and I'm a-thinkin' Michele's husbear would love him some San Francisco valyews right about now.

5. This guy, David Johnson, the lone-surviving "bushman" who hangs out at Fisherman's Wharf and pretends to be a bush, scaring tourists and locals alike? That would add some funsies to the Senate! McConnell would be up there talking very slowly about some wingnut thing, and all of a sudden Johnson could jump out and be like "Boo!" and McConnell would chuckle very slowly and say, "you have surprised me again, you knucklehead!", but really slowly, the turtle way Jon Stewart does it.

6. SCOTT BROWN! Duh, why did we not think of this before, but apparently some enterprising human has already set up a nice California Twatter account for him, and we agree that America's Hottest Former Senator should fail in a warmer climate next time.

SO, problem solved! I was going to suggest that y'all help come up with suggestions in the comments, but this way you can just start rap battles with departing Senator Boxer instead.