Who You Gonna Believe About Obama 'Screaming' At A Protester, Trump Or Your Lying Eyes? 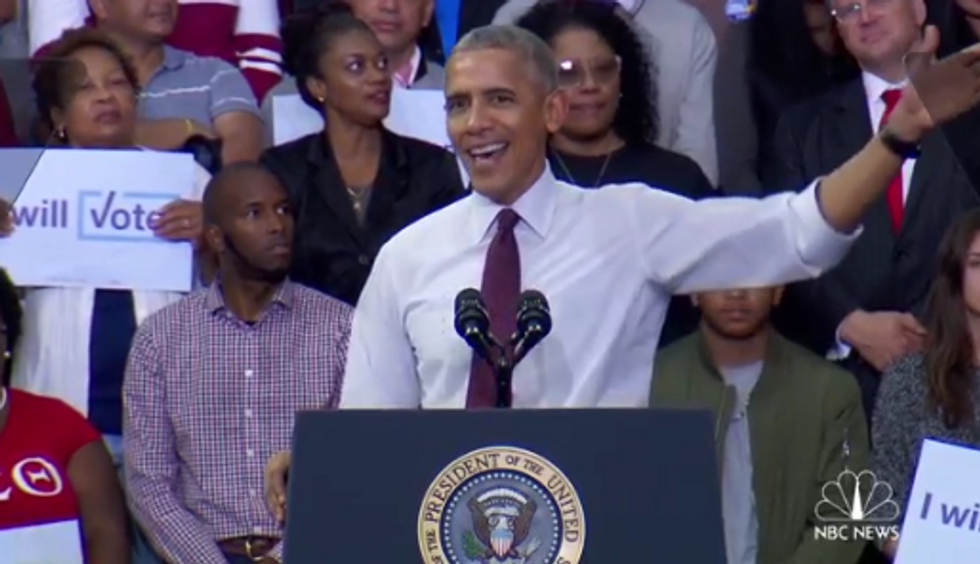 Yesterday, we all had a little love-in for our best president, Barry O, standing up for a protester at a rally with a bunch of Hillary-loving ne'er-do-wells. The Hillz thugs were chanting over an old Trump lover, and Barack Obestguyever yelled at them for a seriously long time before they finally shut up and listened to him and stopped trying to drown out the poor old man.

It made us love him as much as we always do, because we hate that bullshit "chant over the protester" thing whether it's at a GOP rally or a Dem one. It's ugly and spitty and fascist and uncivilized, even if it's our side doing the drowning.

So you will be shocked, shocked to learn that Donald Trump then went on stage and accused Barack Okenya of screaming at the protester, and saying the president was "unhinged."

“If I spoke the way Obama spoke to that protester," Trump said, at a rally in Hershey, Pennsylvania, because he can't help lying even when there is video and there is always video, "they would say, ‘He became unhinged!’ He spent so much time screaming at this protester and frankly, it was a disgrace.”

Obama tells crowd to "respect" protester at Clinton rally: "We live in a country that respects free speech." https://t.co/kZAzsofuKp

You need some transcript, because you are too lazy to click through to Evan's article yesterday? Well okay, because we are not too lazy to copy and paste it! Here, let us blockquote us for you!

He told that crowd to "HOLD UP!" and settle their business down and "I told you to be focused!" and, referring to the protester, said, "He's not doin' nothin', you don't have to worry about him!"

First of all, we live in a country that respects free speech.

Second of all, it looks like maybe he might've served in our military, and we oughta respect that.

Third of all, he was elderly, and we gotta respect our elders.

And fourth of all, DON'T BOO, VOTE!

There goes Barack OJERKMA screaming at old Trump dudes in an unhinged manner, for sure, yes you betcha, what a terrible terrible real bad man.

(Lest you think this was just a simple mistake on Trump's part, he repeated the charge at a second rally in Tampa, again telling the crowd to go back and watch the video. This is a special kind of pathology, and we don't think we want to get too close to the man who's too unstable for the Kremlin.)

Also, Obama forgot to ideate on how great it would be to be in the old times, when a guy like that could be taken out on a stretcher. Barack Obama needs to reread the Rules for Commenting Radicals, so he can break them, like a common Trump.