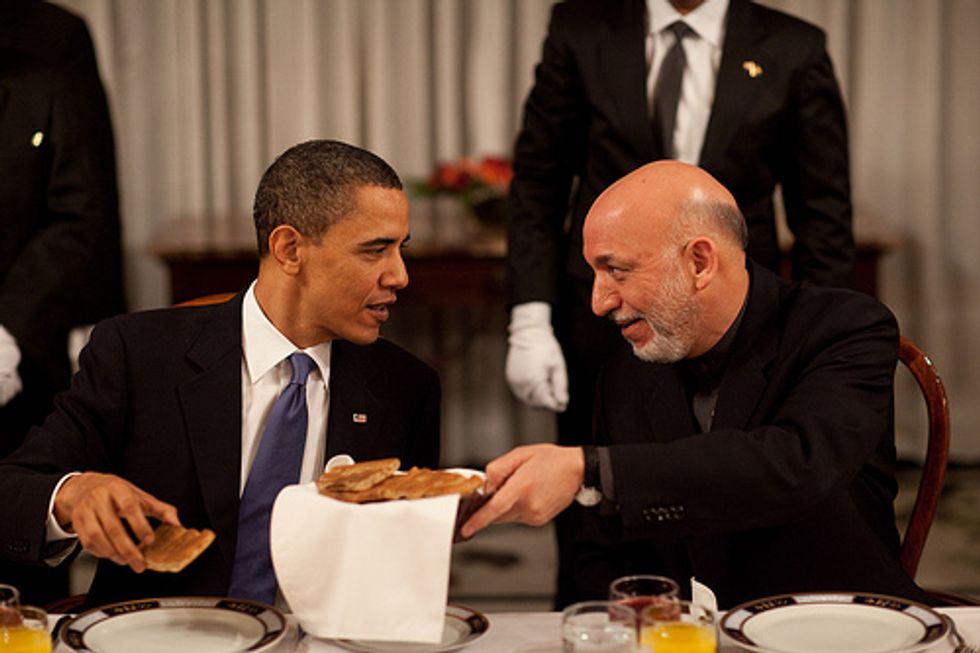 Former UN envoy Peter Galbraith just said on MSNBC that Afghanistan's weirdo president, Hamid Karzai, is a junkie. "He can be very emotional, act impulsively," Galbraith said on the Andrea Mitchell show. "In fact, some of the palace insiders say that he has a certain fondness for some of Afghanistan's most profitable exports." Ha ha, you should've seen the look on Chuck Todd's face. In fact, you can do that, by watching this video clip:

"Reports to that effect," sure.

Remember when everybody loved Hamid Karzai nine years ago because ... why did anyone love him? Because he wore a jaunty hat! This earned him a feature in the New York Times fashion section, if we recall correctly. And now he's just another smack addict threatening to join the Taliban. ALL GROW'D UP, etc. [Clip via TPM]

UPDATE: Reading the comments, we are reminded that it's always Necessary with these kinds of stories to remember the usual trajectory of America's foreign strongmen, with poor old pockmarked Manuel Noriega being the most famous recent example of a U.S.-installed creep going from Washington Hero to Drug-Crazed Freak in the span of a few years. And yes, Peter Galbraith can be trusted about as much as Karzai.

But, considering America's decade-long clusterfuck in Afghanistan -- a place that has chewed up and shat out more Global Empires than any other land on the planet -- it would be both poetic and expected if the sleazy little player we installed as president was a delusional smack addict.