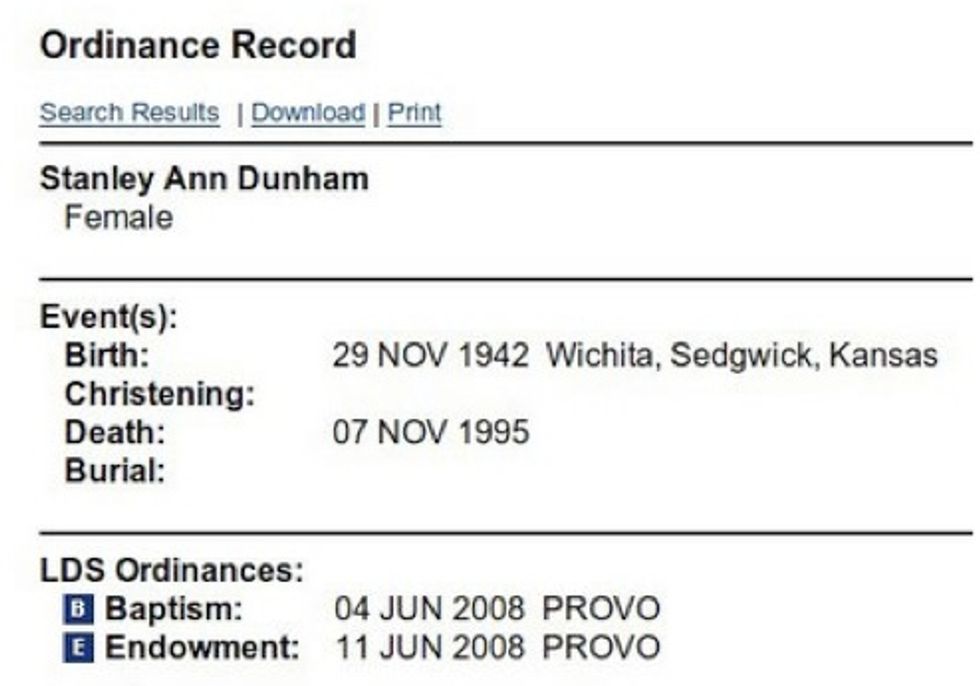 Here's a terrible story about insanity and perversion and other things that are just SO DISTURBINGLY BIZARRE that you wonder why Jesus & God ever created humans, other than to be pets for the important dinosaurs. FromAMERICAblog: "A reader contacted me last week, saying that last year, in the heat of the presidential campaign, the Mormons had posthumously baptized Barack Obama's mother, Stanley Ann Dunham." And the Internet confirms! WHY WOULD TAGG ROMNEY DO THIS?

Then yesterday, I received a document.

It's allegedly a screen capture of the registration-only section of the Mormon-run Web site, FamilySearch.org. In that screen capture, excerpted above, is clearly the name and correct date of birth and death of Barack Obama's mother (Stanley Ann Dunham, born 29 Nov 1942 in Kansas, died 07 Nov 1995) and the date of her alleged post-death baptism by the Mormons.

"The offering of baptism to our deceased ancestors is a sacred practice to us and it is counter to Church policy for a Church member to submit names for baptism for persons to whom they are not related," said spokeswoman Kim Farah in an emailed statement. "The Church is looking into the circumstances of how this happened and does not yet have all the facts. However, this is a serious matter and we are treating it as such."

Hmm, "serious matter," doesn't really get to the heart of it here, the question is, why do you people -- YOU PEOPLE -- create situations where a few nuts can officially baptize famous peoples' dead mothers into the Mormon faith? Not that this has many "practical effects," except to creep Barack Obama out to the point of vomiting.

Did the Mormons baptize Obama's mother, after her death, without his knowledge or consent? [AMERICAblog]