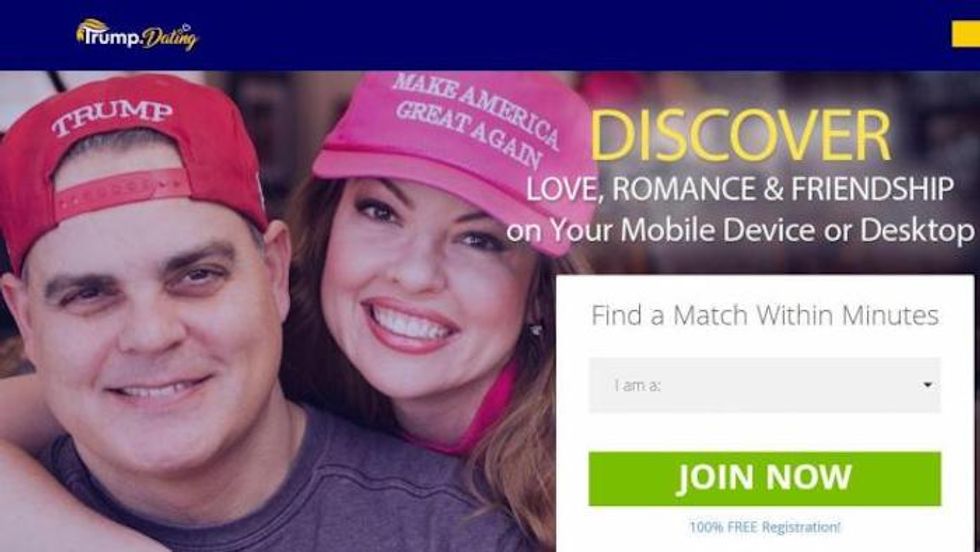 For what seems like decades now, or at least since the 2016 election, a variety of dating sites have sprouted up to meet the needs of Trump supporters who have found themselves rather unwelcome and unpopular on OKCupid and Tinder. Or, like alt-right darling Cassandra Fairbanks, straight up banned from them altogether.

It is hard to find love when you are, you know, the kind of person who goes on Tinder in order to proselytize to people who are just looking for some Netflix and chill. What is a girl to do? These sites, like most social sites created by and for conservatives, are usually not particularly well done, and tend to disappear from the internet rather quickly. It's almost as if they don't even want to hang out with themselves!

Well, as Fairbanks noted, there is a brand new site for people who are hoping to find someone to meme their way off into the sunset with -- trump.dating. The site has attracted attention over the past few days, on account of the fact that it is open to STRAIGHTS ONLY (Sorry "Gays For Trump" guys!), but that it did have an option for the unhappily married and the happily married. Which seemed just about right for Trumpian dating. That option has since been removed. However, I feel the need to note that the site has the widest array of "ethnicity" options I have ever seen on a dating site.

Which I guess is there for white people who are so racist that they are even racist against other white people?

In case you are wondering, I totally did sign up, but so far it appears that most of the profiles I've come across are about as fake as mine.

What's not fake, however, is Barrett Riddlesberger, the guy who, until today, was featured at the top of the site along with his wife Jodi. They're not stock photo models, but a real life Trump-lovin' North Carolina couple who have some connection to the site -- though to what degree is not currently known.

What is known, however, is that Riddlesberger is a convicted child molester.

Riddleberger's past includes a felony conviction for taking indecent liberties with a child in 1995. The charge stemmed from his videotaping himself having sex with a 15-year-old girl when he was 25, the Greensboro News & Record reported in 2014.

A North Carolina criminal history check Monday turned up no serious charges on Riddleberger's record since then. He said he's been married for 22 years.

"I've already paid my debt for something I did 25 years ago," he said.

While we take exception to Riddleberger's math, the couple has already been replaced with what is almost definitely a stock photo.

Quite frankly, I think we should all very much hope that this site finds its footing and does well for itself. Getting creeps like this to self-deport from the general dating pool is something that I, for one, cannot see a downside to.

But, if this doesn't work out, there is always Farmers Only (which does, actually, let the gays in). Too bad ghouls like them aren't allowed at Wonkette, where Marriage No. Three among commenters (which are not allowed) is happening THIS WEEK, in Hawaii. (Mazel tov and shoutout! We'd all be there with leis on if we could.)

Wonkette is YOUR true love! Click to leave us a tip!